Breakthrough of the Siege of Leningrad - Dunayevskaya 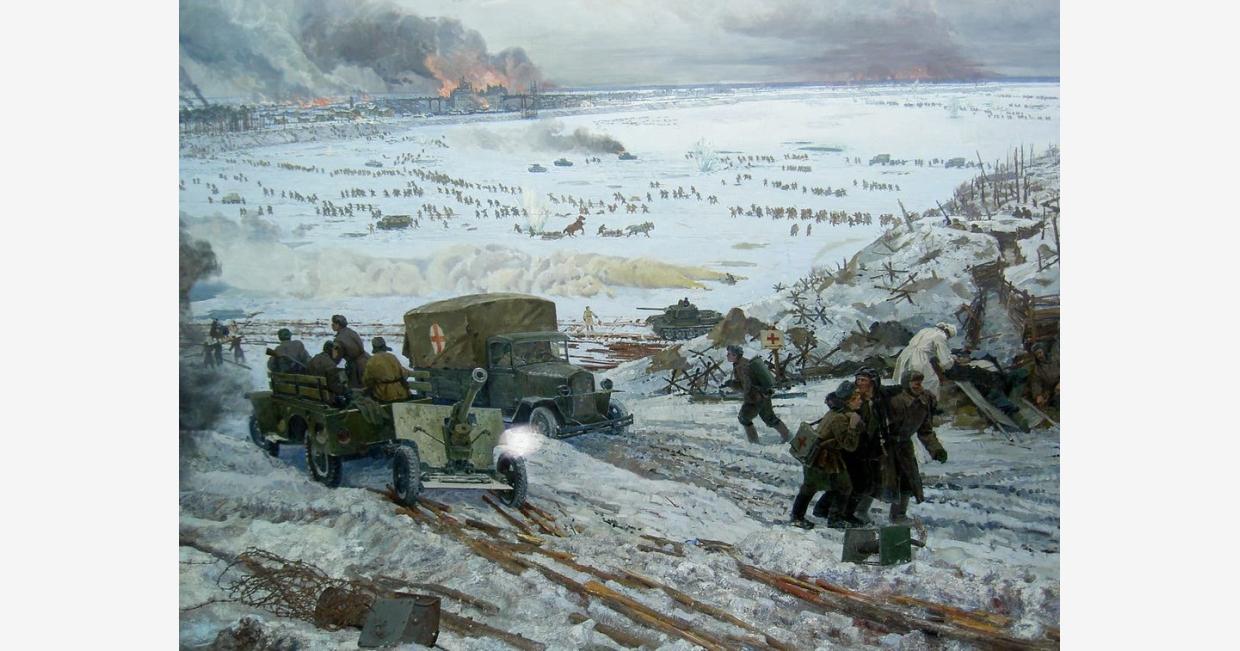 Fragment of the Breakthrough of the Siege of Leningrad Diorama. The attack sector of the 268th Rifle Division was just to the left of the 8th Power Station [the massive building on fire]

Irina was born in a Jewish family in Leningrad, entered the Leningrad State University in 1937 and completed her studies in German linguistics by 1941. Her husband Vladimir Graziansky, whom she married the same year, was killed in action defending Leningrad in September 1941. During the war she worked as a German-Russian interpreter and radio propaganda broadcaster, reading anti-Nazi pamphlets to German soldiers. She was awarded the medals "For the Defense of Leningrad" and "For Combat Merit". After the end of the war she became an accomplished scientist and published more than 40 works in the field of Semitic philology.

"The officers checked their watches. Everybody went to his pre-arranged places. I and several other scouts were ordered to lie on the bottom of a deep and wide anti-tank ditch where all of us had to wait for further instructions.

The artillery barrage started at 9.30. It was a truly shaking experience, both literally and figuratively: everything around us was shaking; heavy artillery pieces and guns of the battleships moored down the Neva are all firing, and from many other places too, all artillery regiments, independent and divisional, all rocket artillery units (Katyushas) are engaged too... We are at the frontline, there's only the Neva between us and the enemy! We can both hear the shots and the shell explosions in the distance... A huge dense mass of artillery and mortar shells flies in bundles over our heads. All the space around is filled with incredible noise and din, whistling, howling and thundering... We are deafened... Mortar shells fly much slower than artillery shells, it's even possible to track them with one's eyesight: it seems like the sky is furrowed by huge handlebars glowing at their ends... The barrage keeps going on and on. I feel strong hunger from excitement and both I and my neighbour, some unknown soldier, open a can of meat preserves from my Untouchable Reserve. The tension in my soul is indescribable...

But in about 3 hours the thunder dies down... an instant pause, and our 942nd regiment surges ahead! Of course, it's not alone, but it's the only one in my field of vision... the BREAKTHROUGH OF THE SIEGE begins!!! Soldiers literally roll onto the ice and run as fast as they can to the steep river bank on the opposite side.

I can't see what's going on there, alas. I have to stay in place until I'm called. There's a veritable anthill around me: people come, people go... Seventeen prisoners have been captured, seven of them by Sergeant Kiyashko from our regiment. Some of the prisoners offered no resistance - they appeared to be Russians. They were captured by the Germans earlier and used by them as unarmed menial labourers.
​
By the evening our HQ was already on the other bank. When staff personnel (myself included) crossed the Neva, it was more like a stroll: shells weren't exploding and bullets whizzed very seldom. The battle rolled further into the forest, several kilometers away from the left bank.

But even now, with no fighting around, scaling the icy bank wall and advancing further into the forest that turned completely black with explosions, furrowed by enormous craters and barricaded by tree trunks and branches, was quite difficult, although the chased and completely flabbergasted enemy wasn't firing at us.

Finally, we made it to the former German, and now our, HQ and started making ourselves comfortable, following the instructions of the quartermasters who had already visited the place. There was quite a bit of space to live in, indeed! The Germans meant to stay there for good and arranged their dwelling with great comfort. Now the multi-room dugouts of the enemy's 170th Infanterie Division were at our complete disposal.
​

I looked inside one of the "compartments" in the dugout and saw a flask hanging on a rope by the bedside. I took it, unscrewed the cap, and felt the smell of coffee with cognac. I was terribly thirsty! But could I drink it? What if it was poisoned? I stood stiff in indecision... Then one of our signalmen hopped up to it, and without even looking at me or the flat cup I unscrewed from the flask, took a huge gulp without thinking of the consequences for a second.

Looking at the soldier (hurray to herd mentality!) I drank a full cup without any hesitation and treated the rest with what remained inside the flask. There was no one sensible enough to turn down the offer. Well, we lucked out. I was just fine!"