Now and Then - Anti-aircraft gun 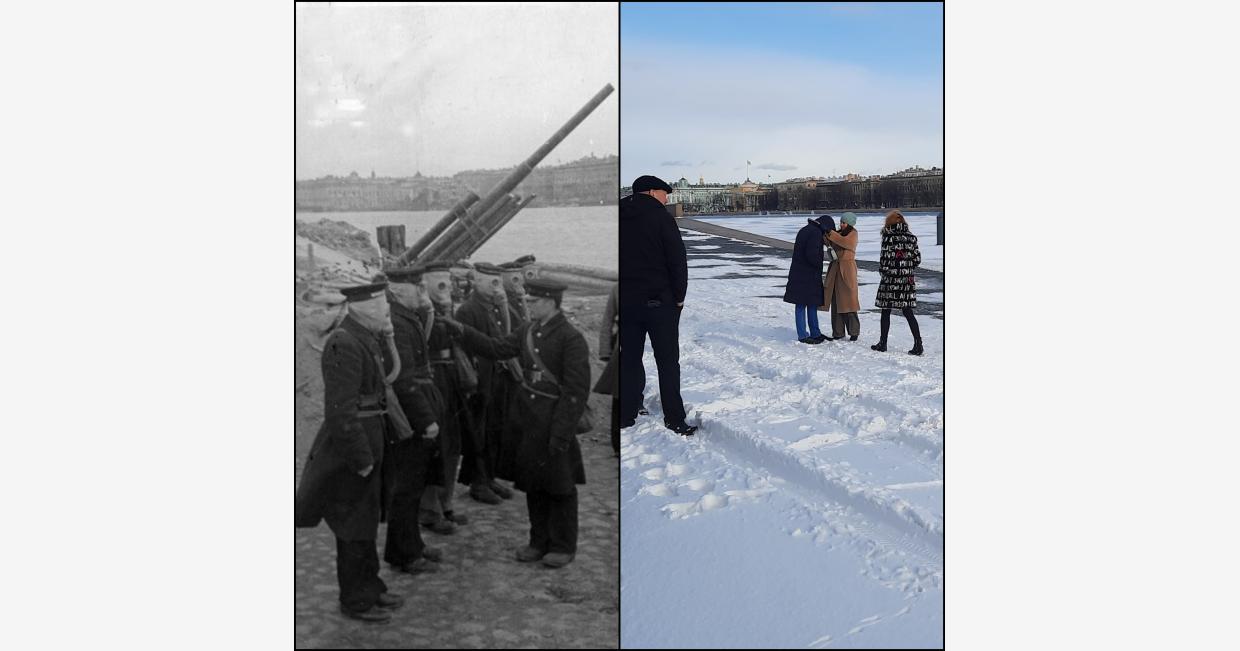 Crew of a 76mm anti-aircraft gun on a chemical attack battle drill on the bank of the Neva River.

From the diary of Saparov Arif Vasilyevich (1912-1973). Writer and journalist, war correspondent. Participant and the first chronicler of the Road of Life.

"It's been 2 days since my return to the much-suffering Leningrad from the Ladoga. I hoped to rest and lie in bed for a while at last. Fat chance...

Yesterday and today there were air raids. They aimed at the Neva river and the battleships. "Kirov" was damaged. I saw this ship. The chimney was bent, black with soot. Its sailors lined up to form a perimeter around the ship. Naval AA batteries were deployed along the embankment. The guns were surrounded with a waist-high hedge of sandbags or sometimes just wooden logs. Just like they did it in forts in good old days.

A bomb hit the house where Anna Batenkova lives. Another one exploded in the courtyard. Another one tore the corner of a house off. The houses on the 16th Line stand with gaping hollow eye sockets of their windows. For some reason tulle curtains survived. They keep fluttering slightly in the wind. There's shattered glass under my feet. It crumbles under my feet as I walk over it.

Lots of pockmarks left by shrapnel on house walls. Leningraders immediately set out to fix the damage. There's busy commotion happening around every building. They managed to procure plywood and tar paper from somewhere.

I see a scene that tears my soul apart. A woman with loose hair and maddened eyes writhes on the ground, her hands covered in blood. It appears that she came back from work and found her daughter dead. "This is her blood!" the woman shrieked, sobbing. This is something one won't ever forget...

Enemy planes dive bombed over the Neva again. It seems like the ships had a rough time again.

Food handouts in anticipation of Mayday celebrations have been announced. It's a real sensation: cheese, groats, even chocolate... Lots of people standing in front of "Leningradskaya pravda" information shields, who copy the City Trade Department's decree.

I've got a state warrant for a new room. Yesterday I was officially presented my new property and signed the acceptance act. By the luck of the draw I happened to become the owner of two redwood sofas and a big-bellied cupboard. The room is rather spacious, unlike my previous cubbyhole."