Now and then - Bayonet practice 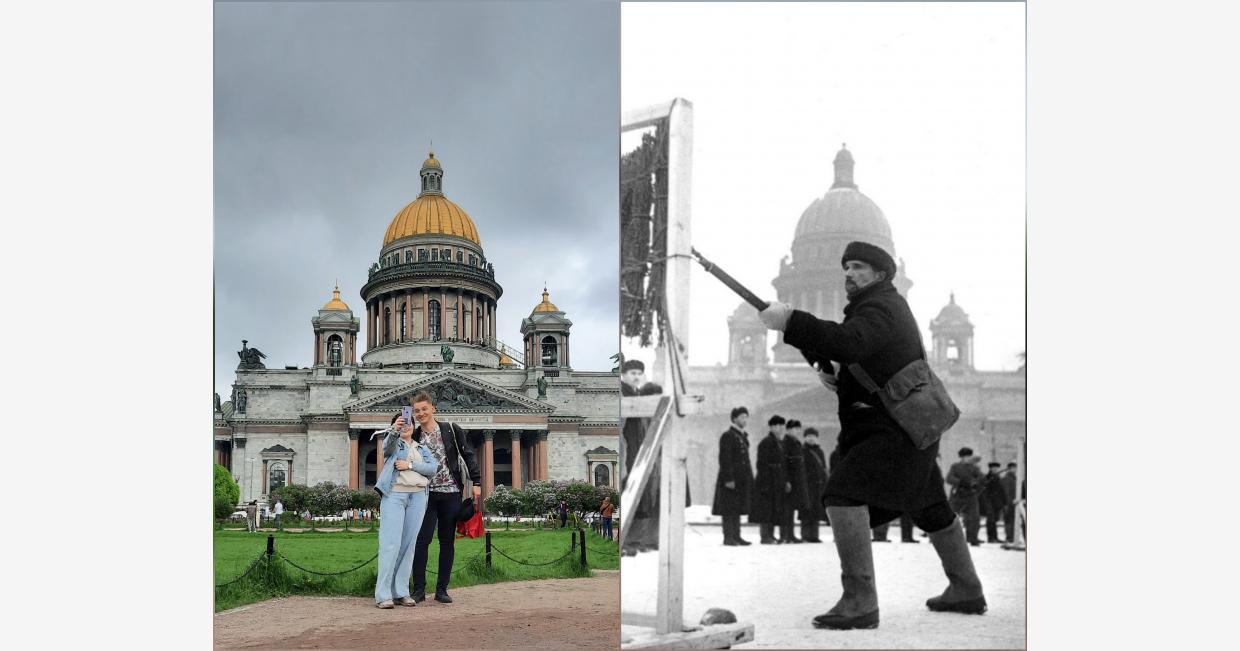 From the diary of Zhigunov Dmitry Venediktovich, 35. Worker at the Kirov Metalworks, volunteer of the 1st People's Militia Division. Fought at the Luga Line, sustained 2 combat wounds and was sent to Vologda for convalescence. He was nominated for the Order of the Red Banner for "skilful leadership and disregard for personal safety" in 1942 but was awarded the medal For Combat Merit instead. After another combat wound in mid-1942 he was deemed unfit for military service by the medical commission but after several appeals he was appointed as the commander of a rear area bunker sector commander in Leningrad. In mid-1943 he was tried by the military tribunal for an unknown transgression, demoted to the rank of a private and sent to a penal battalion. Killed in action on March 10, 1944. The fate of his wife and son who lived in a southwestern suburb of Leningrad which was occupied by the Germans in September 1941, remains unknown to this day.

Extracts from the diary entry from February 1943:

"Every day dozens of Red Army soldiers who took part in the breakthrough of the siege of Leningrad speak on the radio. They tell of blood chilling German crimes in the villages they liberated, and they are certainly no different from the nightmarish atrocities I saw with my own eyes in Tikhvin and along the Volkhov river up to Kirishi. But that was an year ago, while this is happening these days. Weird, it's like I could even count on the transformation of a ferocious beast - bandit - Hitlerite - into a humane person. Really, can anything change them at all, apart from death?

I have read many letters picked from dead and captured Fascists, where some German whore, dripping with her base animal jollity, thanks her plunderer and murderer for the loot he sent her and asks him to send her more, recommending not to show restraint towards the Russians, cause they are not humans, like Germans of the "higher Aryan race". What dastardly vermin! We are immeasurably higher than any German sausage-monger in terms of intellectual development and other qualities, not speaking of their filthy vixens... I have personally read the letters of Elza Fiedler to her fiance Alfred Osten, Gefreiter of the 1st Infantry Regiment of the SS "Totenkopf" Division, killed in the area of our offensive near Posadnikov island. This slut complained she'd spent too much time washing the blood off children's clothes, a woman's chemise and a jacket. Did this scum realise how these clothes got stained in the first place. She never thought and was never terrified of the crime committed by her fiance. It was him, this killed German bastard, who murdered the child and his mother, it's their blood on the clothes he sent what wrathfully calls for revenge. When I recall all the horrors perpetrated by these bandits my blood chills in my veins and I feel mortally terrified for the lives of my loved ones. This is when doubts that my dear beloved family could survive the German occupation and is still alive prowl into my soul, but I cast them away - otherwise imminent death will follow, for I will certainly perish in the first fight if I lose faith they are still alive.

I will never forget the incident in the village of Kuznetsovo. It was under the German occupation for a month, but what they did there can't be told in a year. In December battles we chased the fleeing Germans westward and following my mission's objective I marched with my forward battalion ahead of the division. It was difficult to plod through the snow, we got bogged down by the massive layer of snow that was more than knee-deep. It was dangerous to move along the road - it was mined and within enemy area of fire. We were getting behind the schedule and I decided to turn to the road. And there we are, walking along the road, my minesweepers five steps away from me.

How many of these minutes did we walk! Within 3 kilometers of our route we counted up to 1000 mines of various types and thanks to the sappers we safely approached Kuznetsovo. The Germans decided not to wait for our assault and fled after the first slight pressure. I walked into a village street and all its residents came out to meet us. Everybody was crying, making the sign of the Cross, bringing us water so we could drink, I felt itchy in my throat with excitement and I wanted to cry, and we got surrounded with a group of women with a lot of kids. One of them, already quite mature, wept and asked me to avenge for her rape by a German officer. She told me about that shameful incident. The Fascist officer, quite old one, ordered to gather all residents at his house and forced this woman to take off her pants in front of everyone, ordered her to unbutton his trousers and raped her in front of everyone on sheaves of straw, her children standing by and watching it. How was a man capable of such depravity? No! A man cannot do such foul thing, only a German bandit, who had lost his humanity, could commit a crime so horrid. The tales I've recorded here are hard to bear. Will there be a worthy retribution to all Germans for all they have done on our soil? I think by the time we'll reach the border our government will make a needlessly magnanimous gesture and order not to touch the Germans and their civilians even if they get caught red-handed. But I doubt our soldiers will resist the urge, and I won't resist either. How will I watch this German vermin wear our plundered clothes without killing them? No! Trust me, we'll definitely kill them, we'll give them a taste of at least the smallest share of the horrors they have perpetrated and, unfortunately, are still perpetrating on our soil. All these Fritzes, Hanses and the rest of this German rabble, for how long will hold our land captive? Who can tell? They're gripping on to our land tight, it's hard to push them back, step by step, shedding blood and with great difficulty. But we keep driving the dastardly German away and we'll definitely expel him."