Now and Then - Breakthrough of the Siege day 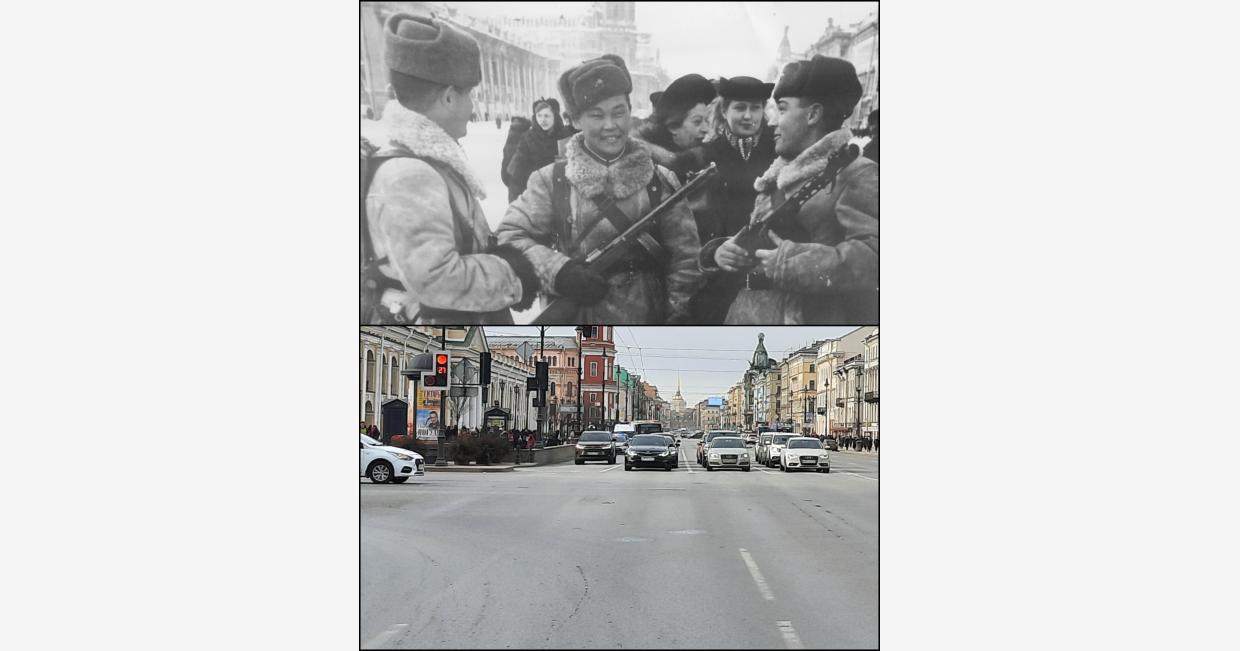 Diary entries of Leningrad residents and soldiers made on January 18, 1943:

"Just as I went to bed, at 4.30 in the morning there was a knock on my door. Ilya Gruzdev: "Yelena Andreyevna! The siege has been broken through! They are inviting us to the radio studio!"

I leapt up. Woke up my family. Wearing only an overcoat, without the uniform jacket, for some reason with three mittens, and as I found out without stockings, just wearing valenki only, I rushed to the street. The night was fair and snowy.

We embraced and congratulated each other. Boris Chetverikiov approached us. A military patrol stopped us on the Italian bridge. They checked our documents and also congratulated us.

The siege is broken through! Everybody was admitted to the studio in the House of Radio. Pale, gaunt, glowing faces. I kiss Olga Bergholz, Borya Likharev, Babushkin. Slogans interspersed with songs blare out of the loudspeakers ceaselessly, followed by speeches of soldiers and writers.

We spoke with great excitement. Gruzdev couldn't help crying, and he wasn't alone in this. A stove was working in the studio. Music editors threw little chunks of wood into it. We walked along thick carpets in a dancing gait and embracing each other spontaneously: "We made it! It wasn't all in vain!". Yes, it wasn't!

As a war correspondent I was given the mission to go to a casualty clearing station and write an article about the soldiers wounded during the breakthrough.

The width of the breakthrough is 14 kilometers only, but it opened an limitless world for all of us."

Prusova Faina Alexandrovna, 39. Doctor in a female department of a hospital.

Last night it was declared: the siege has been broken through! I'm so happy I don't know what to do. I'll write it all down as it happened from the beginning.

So, it's January 18th. I'm sitting all wrapped in layers of clothes - I'm wearing a thick overcoat and several blankets on top of it. A little burner is burning. Suddenly they declared the breakthrough of the siege. And I've had a conversation recently, when I told Olya: "It's Chistmas Eve, make a wish for something", and she said: "I only have one wish, that the siege would be broken through". And now they announced it. I shout: "Olya! The siege has been broken through, wake up!" And she jumped up and screamed: "Andrienko, increase our bread ration!"

Yes, now everything will be fine. We're saved. The road to Greater Russia is opened. Music is blaring from radio loudspeakers all the time. I will never forget this night. Now Leningraders are starting to make speeches on the radio. A factory worker put it well: "Moscow, our heart, thank you for the bread and the ammunition!" Olga Bergholz made a nice speech too.

I celebrated this day with Olga the best way we could. We cooked a soup of dried cabbage leaves."

"Finally, the long-awaited message about the breakthrough of the enemy defense near Leningrad is no longer a dream but solid reality.
It us a good start, and now there'll be yet another blow, and the Leningrad province will be freed from the Fascist vermin and I will find my loved ones, my Verysyen'ka and my dear sonny Kotik, it will be so good. But patience, Major. You've been waiting for so long, wait some more and don't do anything reckless and stupid that might lead to your premature death. Then your Verochka, your life and your sunshine, and your little playful Kotik, instead of care, love and help from you will only get the sorrow, tears and sufferings they don't deserve. And what for? Remember about this, soldier".

Simon Aronovich Gelberg, 29. Painter, head of logistical department of the Ice Road across the Ladoga lake.

"January 18. I want to sing and dance. On the streets of Leningrad there are people (my dear people whom I fed in the summer and winter) who are probably kissing each other.

The siege of this long-suffering, proud, selfless, unyielding and heroic Leningrad has been broken through. Enough said! This is the reward for all our labour!"

From the diary of Ostrovskaya Sofia Kazimirovna (1902-1983). Translator, memoirist.

"I laid in bed all wrapped and enveloped, lamely listening to some radio concert. Then the latest news were reported, which I perceived only by my sense of hearing without understanding them with my brain. And suddenly the voice of the announcer from Moscow said:

- ...successful offensive... Ladoga lake... Liberation of Schlisselburg... Breakthrough of the Siege of Leningrad...

I sat on my bed, astounded. My heart was beating fiercely and painfully. I thought: "No, no - I misheard it - or it was a dream..." The voice of the announcer repeated:

I thought again: "Maybe, it's because of my high temperature?"

But the excited Moscow started congratulating me and playing songs and marches, and then the same shocking and wondrous news was repeated by Leningrad. I sat on my bed, holding my bare legs loose over my shoes, and watched into the darkness of the room, and listened:

- how a medley of diverse vinyl records of marches buzzed and elbowed each other on the radio, all of which I have never loved but which seemed beautiful that night,

- how my city, liberated but not yet released from its prison, shouted touching and elated greetings to the world from the threshold of its freshly opened cell

- how in between the marches there spoke the people with voices overlapping each other out of excitement and they also thanked and also greeted and also cried (with pain and joy), just as I cried...

- how wisely and ardently Olga Bergholtz spoke, and my dear Elena Ryvina too, how heatedly and chokingly shouted some soldiers and commanders at the meeting of some army unit unknown to me which was plugged into the radio network (illiterate, fumbling, ridiculous grunts who were so dear and funny in the most endearing way for me, like my family members!), how Sayanov and Grabar' spoke, some engineers and workers, some Heroes of the Union and someone else.

I was sitting all alone, freezing and yet not feeling the cold. My tooth and jaw were aching, but the pain felt like it wasn't mine.

I lighted and put out the burner. I smoked "Alpiniada" cigarettes. I thought about my brother, my mother, about tomorrow and yesterday. I smiled and waved my hand at the radio. I sometimes said something loudly and applauded silently. And I knew that tears ran down my cheeks from time to time, scant and rare, and disappeared inside my frontline scarf of 1914 and the soft fabric of Elizabeth's striped dress.

The breakthrough of the siege of my city.

This means we, the ones who remain, will survive.

This means we, the ones who remain, have been pardoned: our death penalty through the torture of despair, hopelessness, hunger and numbness has been cancelled.

But: the siege has been broken.

And any death will come not from the siege and not during the siege. This will simply be a wartime death - probably awkward, probably needless - still the same and yet different...

It's a rare sensation of collective joy I'm feeling now. The warrant for release from this prison has been signed for the entire city. I won't be the only one to be freed. Everyone will. Everyone is happy. Everyone is crazy. And me too.