Now and Then - Catherine Palace 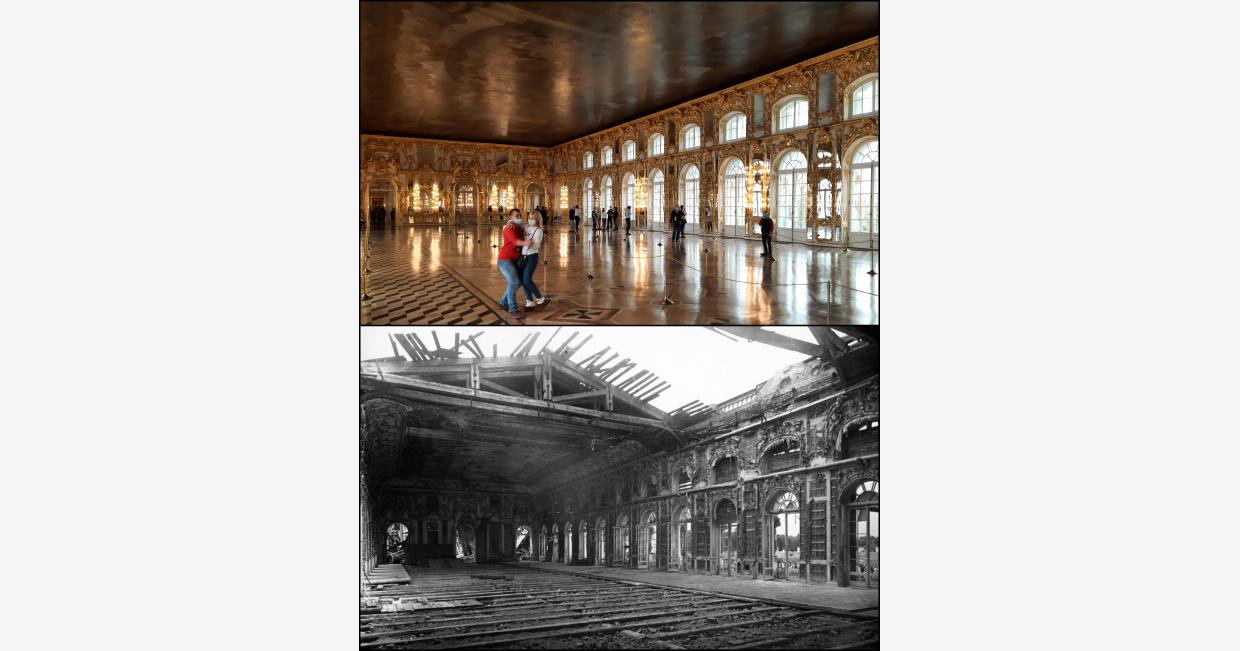 The Great Hall of the Catherine Palace after the removal of most of the debris.

"January 25th. The night of January 26th. 2.30am. Pushkin has been liberated! At 10.30am I and correspondents Voronov, Sozhin and a Pravda cameraman depart for Pushkin on our GAZ-M1 car.
At the entrance to Pushkin there stands a pole with a plaque painted with white paint, displaying an announcement written in black letters:

"Attention!
Forbidden zone.
Those crossing this line towards Leningrad,
Will be shot without warning."

Under the line there's the same warning written in German. To the left of the writing there's a skull with crossbones. I take a picture of it.

Pushkin!.. The town of Russian poetry!

We turn left from the Orlov Gates peppered with steel shrapnel and bullets, pass by the surviving Ruin, race past the lakeside along the alley towards To-my-Dear-Comrades-in-Arms Gate; with trepidation I look further, through the thickets of fallen trees the park has been turned into. The darkened roof of the Turkish Bath is grinning with broken scaffolding and the Chesme Column is - thank God! - intact.

To the right there's a row of houses - some are half-destroyed, others were burned down or razed to the ground.
Across the lake I can see the Cameron's Gallery, the Catherine Palace. My heart shrinks: what shall we see when we get close to it?

Anti-tank guns are standing in the alley. A squad of Red Army soldiers is towing trophy weapons, supplies and German ammunition.
Knee deep in the mud, we walk along the canal, hurrying to get to the Catherine Palace, lit by the rays of sun which broke though the sky. Without even getting close to it, we can see that there's just a hollow carcass left from the palace which seemed to be intact from the distance. The church is shining with blue colours, but its domes are bared, the gold leaf has been peeled off, scaffolding is sticking out.

Widow openings resemble empty eye sockets, the frames are broken or gone completely, heaps of broken bricks can be see under the walls. Inside the palace there's the chaos of caved in empty halls, walls ripped up to their bricks. Everything is broken! Here and there one can see glittering pieces of gilded friezes, shattered remnants of medallions, ornaments, bas-reliefs. These fragments aggravate the grievous impression produced by the destruction. Neither the Amber Room, nor the Great Hall, nor any other world famous halls. Where has is all gone, all the amber, parquet floors made of amaranth, red and black wood, mosaics, silk from old Russian factories?

Where is the immense trove of treasures this place once possessed? Have they been destroyed? Or taken to Germany?
The palace I've known since the days of my youth is now in ashes, charred, in the state of a most deplorable devastation.
We walk out of the palace, depressed by its sight.

The long side wing of the Circumference is overfilled with horse manure, the doors of the rooms in its corridor are torn off. There's a horse stall in each room. This is where the arrow of the road sign with the Spanish inscription "Caballos alpaso" and an image of a horse we saw near the Third Pond pointed. The vagrants from the Spanish "Blue Division" organised stables for themselves here!

There's a marble Venus standing with her back to the window of the first floor in the Zubov Block. It is entwined by a green wire. It stretches further, into the cellar. In the cellar there's a huge air bomb. Under the arches of the Cameron's Gallery there are 2 other 250kg air bombs connected by the same wire. The arches under the gallery are blocked by reinforcing beams. The wire stretches under the snow further into the park, all the way to the Grotto. This is where the clock of the time fuse had to set it off. They failed! Our sappers had pulled it from under the snow right before I came there, having tracked the direction of the wire, cut it and prevented a monstrous explosion. I took a picture of the flag placed on the spot where the wire was disconnected. And then another black Hitlerite flag with the inscription "Sammerplatz Moller"...

The Cameron's Gallery has survived, although it's missing the bronze bust of Lomonosov and other statues. Ammunition crates are all around the staircase, same heaps of crates can be seen in the Grotto.

Having walked around the Grand Palace and looked at the empty spot by the Lyceum where the monument to Pushkin was supposed to stand, we return back to my car. A brief council: where shall we go? To Pavlovsk!"