Now and Then - Churchill tanks on Moskovsky 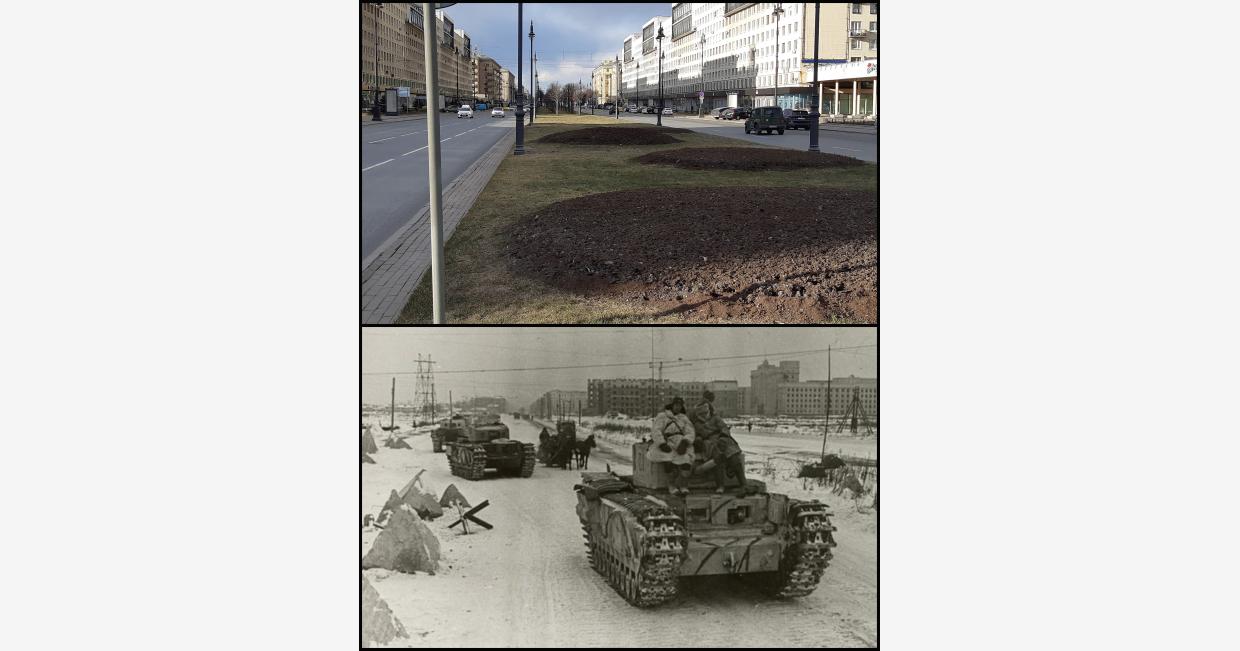 From the diary of Kseniya Polzikova-Rubets, 63, school teacher.

"We're being shelled heavily. Our artillery is firing as well. In this thundering one can't find out who is shooting.
A student of the 10th grade Tuul' said: "Kseniya Viktorovna, we haven't captured Pushkin, I know this from the Smolny". [seat of the Leningrad government] What does this mean. Obviously, it's changing hands. And yet there is no news. [up until January 24th the Red Army didn't assault enemy positions in Pushkin. In early morning on that day the Germans secretly abandoned their forward positions and hastily retreated, fearing encirclement, and Pushkin was cleared of the last remaining German rear guard troops on the same day]

"Night from January 17 to January 18. At 0.30am I got back home on a pickup truck from Okhta, from the 42nd Army newspaper editorial office. In one day we visited three divisions (45th, 63rd and 64th) of General Simonyak's Guards Rifle Corps.

General status: Army Corps of Generals Simonyak, Alferov (both are performing well) and another one. The Corps of General Trubachev and other units are in reserve. Today the Belgorodsky tank unit entered combat. Before that tanks were practically not engaged in fighting in the sector from the Gulf of Finland to the central part of the Neva.

Air support? There was flyable weather only in the morning, but our planes kept bombing and assaulting Germans throughout the whole day.

There was terrible tension in the headquarters of Alferov's Corps on January 15th during the artillery barrage: will the infantry rise from their trenches to start the attack? All divisions rose as one at 11.00 and charged the enemy with irreproachable bravery. In the center success was immediately achieved. 125th Division of Alferov's Corps and his neighbour, 64th Division of Simonyak's Corps, broke through the German defenses and penetrated deep into their rear area. Other divisions were immediately thrown into the breach, towards Konstantinovka. On the flanks German resistance wasn't entirely broken. This is where a delay occurred and large casualties were sustained. For example, tanks entered combat to support the infantry too late near Uritsk and the commander of one of the rifle regiments wasn't able to execute his combat orders, letting down both his regiment and his neighbours. By the decree of the Front Command he was shot.

I talked to staff officers of Alferov's Corps. Learned a lot of interesting things. The power of the artillery barrage the day before yesterday was amazing. Artillery saturation on the Leningrad front is incredible. For example, on the sector of Alferov's Corps attack only there were 30 artillery regiments, beside the Heavy Artillery of the Reserve Supreme High Command and mortars. One gun per every 10 infantrymen. This might is truly unbelievable!

Today, on January 17, the situation near Uritsk has been remedied, and ski units in particular are operating there well. There was success in the area Pushkin when Aleksandrovka was captured with the use of tanks.

The order of the day is: capture Krasnoye Selo by the next morning and assault Voronya Mountain. Today, by the evening our infantry and tanks reached the outskirts of Krasnoye Selo. Fierce fighting is going on."

"I went to watch the battleships on the Neva together with Kotya, how they fired at these scoundrels. There was incredible thunder. We approached the ships closely. Officially it wasn't declared, but we know it: it started.

We've been waiting for this day for so long. We were confident we would prevail, and our waiting wasn't in vain.

May window panes shatter, may their frames fall apart, may doors get blown out of their doorways by the blasts of our guns.

We'll fix it all.

We only need to prevent these scumbags who fired at the city from escaping.

We'll hang them on the Palace square.

It looks like our dog has finally had its day. We're yet to face many bad things in the future, but these swine will have it the worst.
Death to German invaders."