Now and Then - Eisenhower in Leningrad 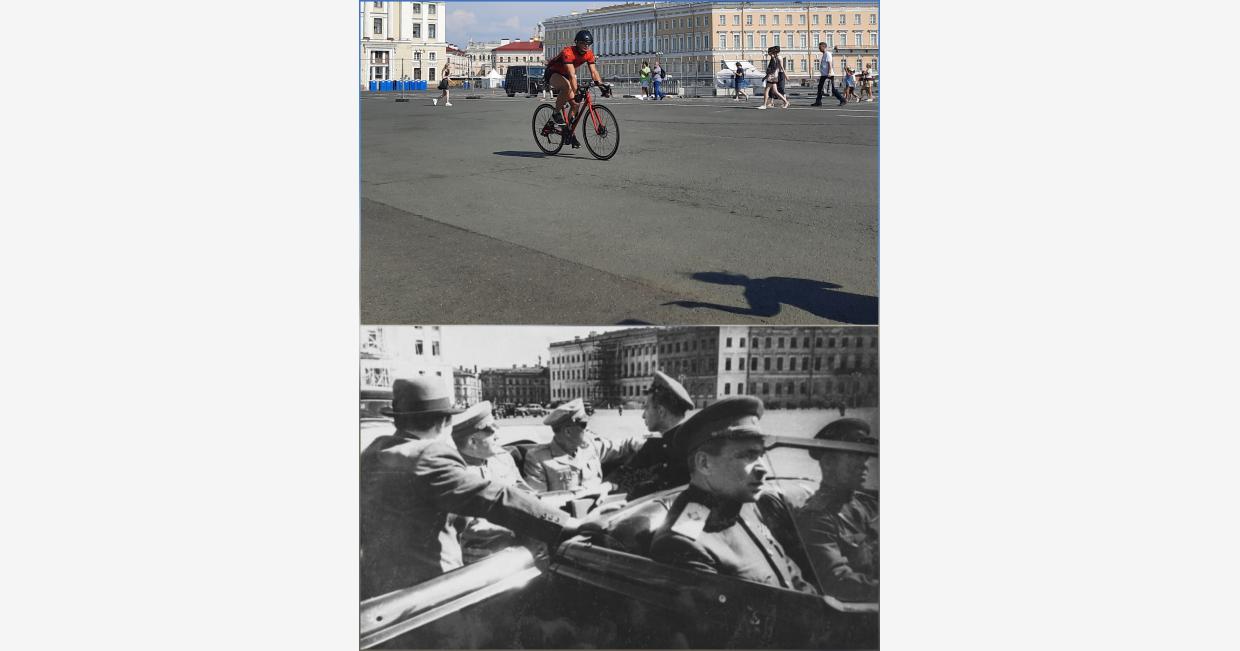 Marshal Georgy Zhukov, Marshal Leonid Govorov and General of the Army Dwight Eisenhower on a tour of Leningrad.

During Eisenhower's visit to Moscow in August 1945, Marshal Georgy Zhukov, with whom the American leader developed a remarkably friendly and respectful relationship, offered him to visit any other Soviet city of his choice - "even Vladivostok". Curiously enough, while these days most Eastern Front afficionados in the West would choose Stalingrad or Kursk in a heartbeat, Eisenhower opted for Leningrad:

From "Crusade In Europe" by Dwight D. Eisenhower

"During the war I had heard much of the magnificent defence of Leningrad in 1941 and 1942. I expressed a desire to visit that city briefly. In the siege of Leningrad 350,000 civilians, according to the Russian records, died of starvation. [The modern historical consensus figure is 800 000 civilians who died of all causes inside the city and an extra 200 000 civilians who died during or immediately after the evacuation and due to long-term effects of the siege - Alexander Shmidke]. Many more were killed and wounded. These figures were constantly recited to our visiting party by civilian officials of Leningrad who joined the military commanders to act as our local hosts. The extraordinary suffering of the population and the length of time that the city endured the rigours and privations of the battle combined to make the operation one of the memorable sieges of history; certainly it is without parallel in modern times. All of us were struck by the fact that in speaking of Leningrad’s losses every citizen did so with a tone of pride and satisfaction in his voice.

The pride, of course, was understandable in view of the heroic endurance that had defeated the enemy at that vital point; but it was mote difficult to grasp the reasons for satisfaction, even though it was explained to us that the city, by paying such a tremendous price, had proved itself "worthy of Mother Russia."

The mayor of the city had us for luncheon with a number of civil and military leaders of the region. Russian artists were there to entertain us. We listened to vocal and instrumental music, to dramatic recitations — which, of course, we could not understand — and watched some beautiful dancing. I remarked to my host that I was struck by the universal respect for artists in Russia and the extraordinary appreciation that everyone, from highest to lowest, seemed to have for art in all its forms. My host replied that any Russian would cheerfully go hungry all week if by doing so he could, on Sunday, visit an art gallery, a football game, or the ballet.

During the toasting period at the Leningrad luncheon my son, who had heretofore escaped the ordeal, was called upon by Marshal Zhukov for a toast. Later John told me that during the entire visit he had been fearing such a challenge and had prepared himself for it as well as he could. He rose to his feet and after remarking that as a young lieutenant he was not accustomed to associate with marshals of the Soviet Union, mayors of great cities, and five-star generals, he said in effect: "I have been in Russia several days and have listened to many toasts. I have heard the virtues of every Allied ruler, every prominent marshal, general, admiral, and air commander toasted. I have yet to hear a toast to the most important Russian in World War II. Gentleman, will you please drink with me to the common soldier of the great Red Army".

His toast was greeted with greater enthusiasm and shouts of approval than any other I heard during the days when we heard so many. Marshal Zhukov was particularly pleased and said to me that he and I must be getting old when we had to wait for a young lieutenant to remind us "who really won the war".