Now and Then - Evacuation of the wounded in Osinovets 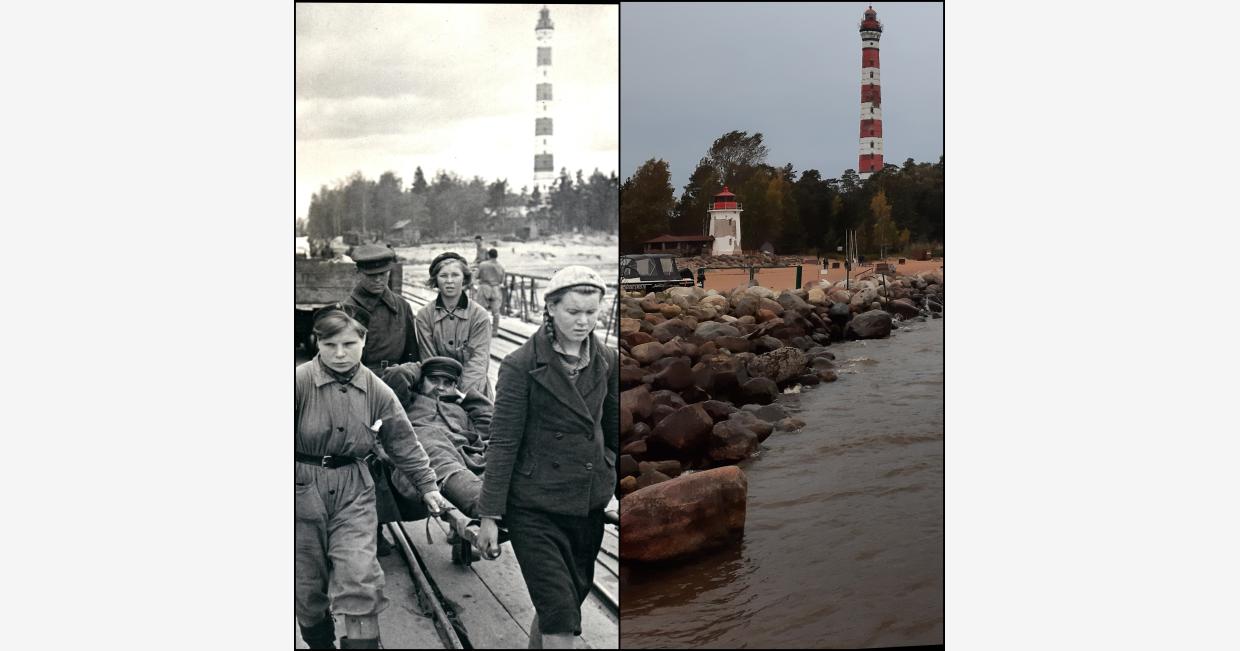 Evacuation of the wounded across the Road of Life from the pier at the Osinovets lighthouse.

From the diary of Eliseyev Nikolay (1912-1996). Truck driver and mechanic in a medical company deployed on the Road of Life.

"Day 341st of the war. I'm going to Leningrad tomorrow. I prepared a sack of stinging nettle and 0.5kg horseradish, all green and fresh off the soil. I burnt my hands with the nettle and now they're itching and hurting unbearably

Today was an unusual day in our district. Starting from the very morning the situation in the air got intense. Fascists bombed the area of Kobona in the morning. My eardrums trembled with the power of explosions and enemy recon planes appeared here in the daytime every now and then. Only a handful of our planes appeared and they showed little initiative.

At 18.00 the vultures bombed our pier heavily. Several heavy four-motor bombers [More likely 2-motor He-111's or Ju-88's - Alexander Shmidke] dived right in the area of Ladozhskaya train station [The main train station of the Road of Life near the port in Osinovets on the eastern side of Ladoga lake - A.S.] for 20-30 minutes and bombed our departing trains. Our AA guns showered them with flak but didn't score any hits. After the departure of the heavies fighters appeared, which probably photographed and reconnoitered the area and left without a single loss. The Germans have been employing this tactics for a long time when they send in the heavies first and then their lights arrive. One has to commend the remarkable bravery of our pilots who boldly engage superior enemy force but they didn't shoot down a single plane.

Our shortcomings in performing operational missions:

Currently we're unable to perform our operative tasks. We still suffer from a lot of shortcomings. For example, during the enemy air raid everybody fled to the forest, abandoning our vehicles to their fate. What's worse, our trucks have no stretchers and medics have neither medical bags nor a single bandage. There are no clearly defined crews attached to certain vehicles. In the end of the day there might be several medic girls per one truck: two, three or more. All of these girls are still unable to treat the wounded properly, they have no experience at this job.

The placement of our company is extremely unfortunate as it is very heavily concentrated, just over a few square meter. There are vehicles here and soldiers living right next to them. Just 2 or 3 air bombs would be enough to destroy both all materiel and personnel. It is especially unfortunate that there's a hospital right next to us. Wounded soldiers run across the forest all the time, but they can easily get hit with AA shrapnel, which happened to Shkotitsa. He was wounded in the shoulder.

I should make a remark on the issue of deployment of our military units too and our AA batteries in particular. They are spread along the entire lake coast, concentrating right near the station and the piers, while they easily move deeper into the forest by 200-500 meters and fire from there without unmasking themselves.

Due to such bad deployment, when the Germans bombed the station and the piers, the latter weren't damaged but the AA units and others were hit hard. We had 200 casualties which could have been avoided. This issue hasn't yet been thought out properly by our commanders".