Now and Then - Field of Mars machine gun 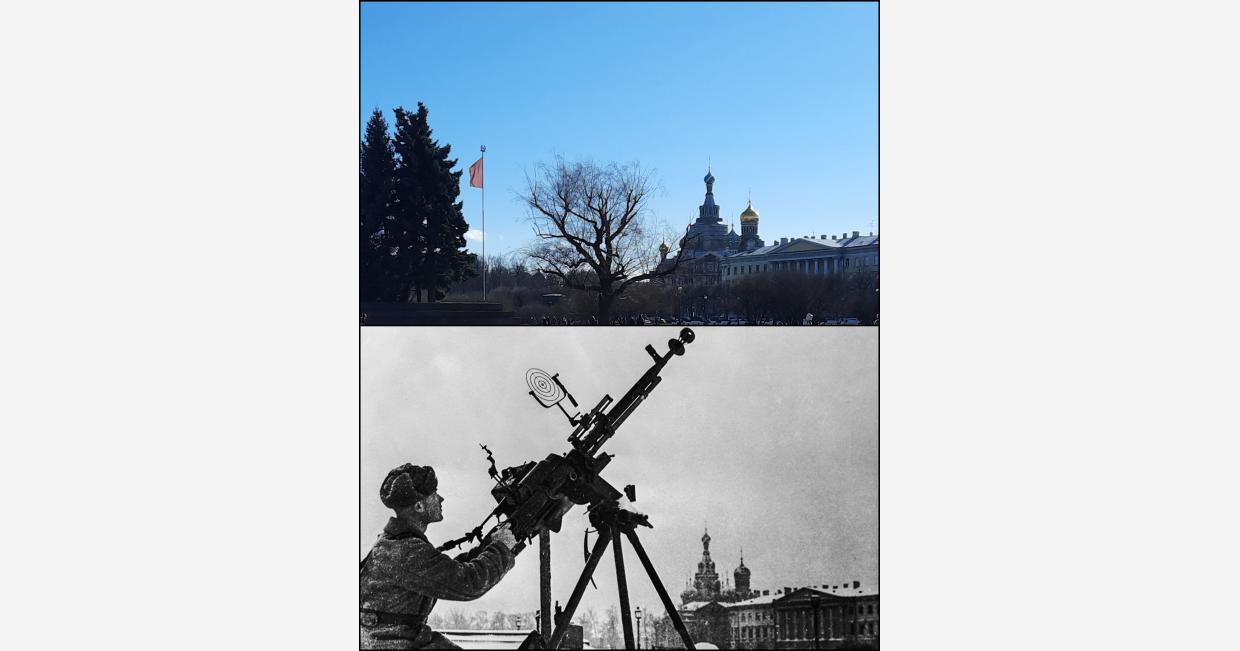 Square of the Victims of the Revolution, Leningrad. Winter 1942 / Field of Mars, St. Petersburg. April 2021

Heavy 12.7mm DShK machine gun position on an AA mount on the Field of Mars. The Church on the Spilled Blood can be seen in the background.

From the diary of Sokolova Elizaveta Alexandrovna. Employee of the Leningrad branch of the All-Russian Communist Party History Institute.

Extract from the diary entry from September 16, 1941

"It's been ten days since the Fascist bastards started leveling our beautiful city to the ground. More than 10 large residential apartment buildings were destroyed in Dzerzhinsky district. During the very first raid a large apartment building was destroyed on Chaikovsky street, one house away from the District Soviet and District Committee. On the second day after the bombing a meeting was held in the District Committee and we passed by this collapsed building. Across the street, over an intersection with a lane, one could see a destroyed building on Peter Lavrov street.

The District Committee secretary Levin reported at the activists council the next day after the bombing that 9 residential houses were destroyed and the city water supply pipeline system was severed in 4 places. MPVO ["Home Guard"] units were doing an excellent job both in the district and the town in general. All incendiary bombs were disabled and the fires put out.

The first bombing caught me at the apartment. I had to go outside to the street and then take cover in a ditch when the big explosions started. I could see HE and incendiary bombs the fell on our native city explode.

A deadly struggle went on in the air. Our AA artillery was firing at enemy airplanes. I was amazed at the huge amount of signal flares which illuminated the city. They told me later at the District Committee that these were enemy signals. But aren't there just too many of them? Saboteurs prowl into the city from everywhere and during the first night of the bombing one such signalsman was apprehended near the Marble Palace with a supply of rockets, and then on one of the following night someone saw a person launching such rockets from the third floor of a building. However, despite out best efforts, no one was caught. There were soldiers garrisoned on the third floor.

The second bombing caught me on the way from the Institute back home to Ozerki, where I was going at 10pm. Trams stopped as the air raid siren was sounded and all passengers took cover wherever they could. I ran inside the entrance of one stone building and stayed on the stairwell up to the time when the air raid ended. All around me there was thundering of AA guns and HE bomb bursts. Several bombs whizzed very close and exploded and then the sound of falling buildings followed. It was a bit scary. It seemed like the bombs were about to fall on us. People were anxious, children and mothers cried, but there was no panic. Everybody patiently waited for the air raid to end. Later I learnt that a medical clinic was destroyed close to the place where I took cover (Karl Marx prospekt) and an orphanage on Serdobolskaya street. I got home around midnight.

I heard the third bombing while being at the Institute where I stayed on duty at the order of the District Committee. It wasn't scary at all. It appears one can get used to this."

[Stories about signalmen-traitors launching flares to help German bombers remain one of the most resilient myths of the Siege of Leningrad along with the popular misconception that all the city's food supply was destroyed in one day. So far neither German nor Soviet documents have been found to confirm the existence of German spies. It is possible to assume some pro-German elements could have tried to help the Luftwaffe while putting their own lives at risk, however without prior arrangement with the German side on the meaning of these signals they were of practically no value for target identification. It is quite possible German target marker bombs or flares dropped from airplanes were taken for the ones launched by "traitors".]