Now and Then - Gallows in Luga 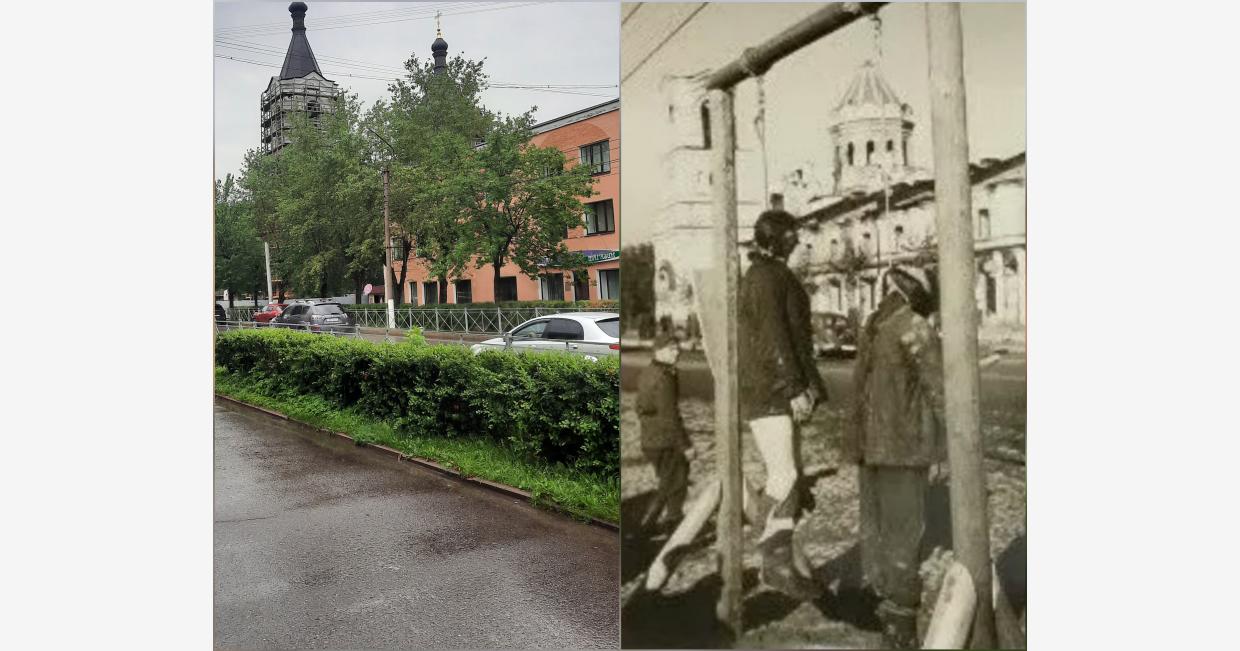 Gallows in the city center where partisans and violators of "occupation authorities' orders" were routinely executed.

"When the Germans captured Luga, we were allowed to go back home. Long columns of refugees started walking towards the town: women, old men and children. I remember how mortified I was when I saw a hanged man for the first time. On that day I was walking across the city with my sister-in-law to meet my acquaintances and met a group of Germans who were escorting Kondratiev who worked at a restaurant-hotel called "Palais Royal". When we were walking back next to the post office, we saw him handing on a gallows. I felt so terrified in my heart, so scary and nauseous.

Germans sometimes walked around in the nighttime and drove the residents to the Market square to watch how they deal with those who were suspected in having ties with the partisans. In September 1941 I witnessed the execution of innocent people with my own eyes. A truck arrived. The Germans thew off its tarpaulin cover and pushed 14-ish year old boy and a man out of the truck bed. He kept grabbing at the truck, wept and cried: "Dear sir, I'm not a partisan!" The boy's shirt got pulled up, his trousers slid down, and the soldiers had trouble tearing him off the truck. The Germans who stood by laughed and photographed this terrible scene. And then we heard the man's words: "Don't cry, son. It's better to die than live on your knees." I was also shaken by the fact I recognised one of the residents of our town among the executors. Later he became the head of local police auxiliaries".

Relayed by V.S. Shitz about the life of his grandmother during the occupation:

"My grandmother lived in Luga during the occupation, washed the Germans' laundry in the hotel or in the casino near the marketplace, peeled potatoes for the prison camp guards. She was allowed to take a certain amount of potato peels for this work. Her friend tried to steal 6 potatoes for her starving children and she was shot by the prison guards for that.

There's a mass grave soldiers and local peasants who died during the war in the village of Velikoye Selo. This is the native village of the soldier of the Great Fatherland War, former partisan of the Fifth Leningrad Partisan Brigade and later a Red Army soldier, winner Order of Glory Alexander Grigorievich Shubin. He recalled that when the Fascists crashed into Velikoye Selo on their motorcycles, local villagers fled to the woods. His mother got delayed at her house and was the last one to flee. A German soldier aimed his rifle and shot her in cold blood. In the same village 14 local residents were shot for attempting to join the partisans, almost all of them being young men. Before getting shot, they were asked to dig their own grave and undress. The witnesses of this crime claimed they could see the earth "breathing" over the dead. Now there's a memorial on this murder site.

The occupiers conducted registrations and re-registrations of the population, enlisting all people from 14 to 65 for labour duty. A curfew was introduced, movement outside the city was allowed for holders of special passes only. The locals lived in constant fear of the Germans' wanton violence, fearing being deported to Germany. The gallows which stood in the city center on the corner of Kirov prospekt and Svyazi lane, was almost never empty, and corpses were left hanging on it for several days."

From the memoirs of Belikova Esther Alexandrovna, who was 5 years old in 1941:

"I remember when two partisans were being led to the gallows. Their hands were tied: the hand of one man was tied to the hand of another. And they were undressed to their underwear already. Probably, they knew they were going to die. And surely they met their death in a very dignified way. They were made to stand on the execution spot, their sentences were read and then they were shot in the napes of their heads. And they fell straight in a pit. And how many of our partisans hung on the square! They kept hanging and hanging and hanging, just their silhouettes being visible to me, and they had wooden plaques attached to their chests with the inscription: "Partisan". My mom covered our little faces with her hand and said: "Move, move!"

I remember when our construction teams started working in 1973, digging up the soil to put concrete lampposts, they started excavations near the post office. And they dug up young skulls, foot wrappings, boots of our soldiers. And they hands were tied by barbed wire. Probably, these were the soldiers of our rear guard units." 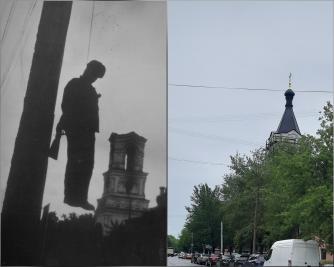