Now and Then - Gatchina burgermeister 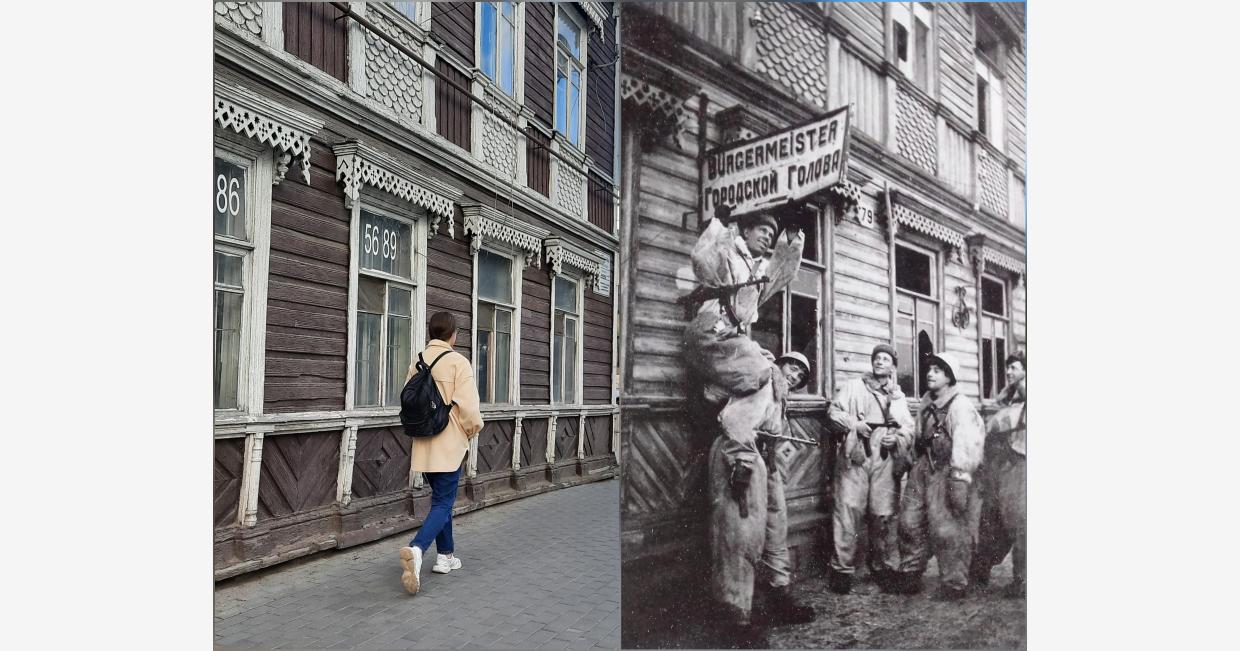 Soviet soldiers taking down the "Burgermeister" plaque from the former office of the local Nazi occupation authority.

From the memoirs of Stankevich Stanislaw Ivanovich, Gatchina resident, a teenage boy at the time:

"Since the Germans bombed Gatchina, a major strategic rail hub, persistently, we were sent to the forest near the village Maloye Zamostye. They dug us a trench for several families in the forest... They said they would take us to Leningrad as soon as they would finish the evacuation of factory equipment. When my father was driving from Leningrad on a truck to pick us up, he was stopped by soldiers and told to turn back, because Gatchina had already been captured by the Germans. This is how we stayed under occupation... Having come to the town to our street, we found out our house got burnt down. My mother Elena Mikhailovna sat on its charred remains and wept for a long time, holding my toddler brother in her hands. We had nothing left...

My mother went to the farm fields to scavenge for leftover potatoes after harvesting, fallen cabbage leaves and other morsels of food. We went to the cargo rail terminal to beg for food... We starved terribly. It was easier in the summer. We ate stinging nettle, saltbush, sorrel, gathered berries and mushrooms along the rim of the forest, because it was forbidden to enter it - one could get shot for going there. My mother took me to the marketplace and showed the gallows where every week 3-4 new person were hanged, with plaques saying "partisan", "thief" etc. hanging on their necks.

They hung a 14 year old boy who stole a loaf of bread from a bakery on Krasnoarmeisky prospekt, he had a sick mother and 2 more little siblings. He was hanged on the second floor of the house where they lived, it was on the crossing of Chkalov street and prospekt of the 25th of October.

In 1943 we received a subpoena from the Ortskommandantur. We were supposed to be sent to Germany. When 2 Germans arrived on a horse drawn carriage, my mother fled and hid from them. But in about 8-10 days the Germans found her at home in the morning, read her some paper and told her she had 30 minutes to pack her belongings and children. We were loaded in a carriage where a number of women, children and old men were already sitting. On the third day we stopped in Poland. People tried to crawl towards out train along the embankment, these were Jews, but the guards in yellow uniforms with swastika armbands hit them on their heads and hands with sticks. They begged us for bread, and women chipped pieces off their loaves and threw they through the metal bars on the windows, and the guards kept beating them... All railyards in Warsaw had been bombed already and this is why we were rerouted to Latvia. We were accommodated in a former club. Farming estate owners arrived there and picked slaves for themselves. My mother was taken to a logging camp for 3 weeks. My sister walked around local farms and begged for bread while I tried to take care of her and did errands for my master."

Elena Mikhailovna and her children survived the camp in Elgava and the bombings, they managed to escape from a barn where the Nazis herded people and set it on fire, and managed to return back to Gatchina.