Now and Then - Gatchina cathedral 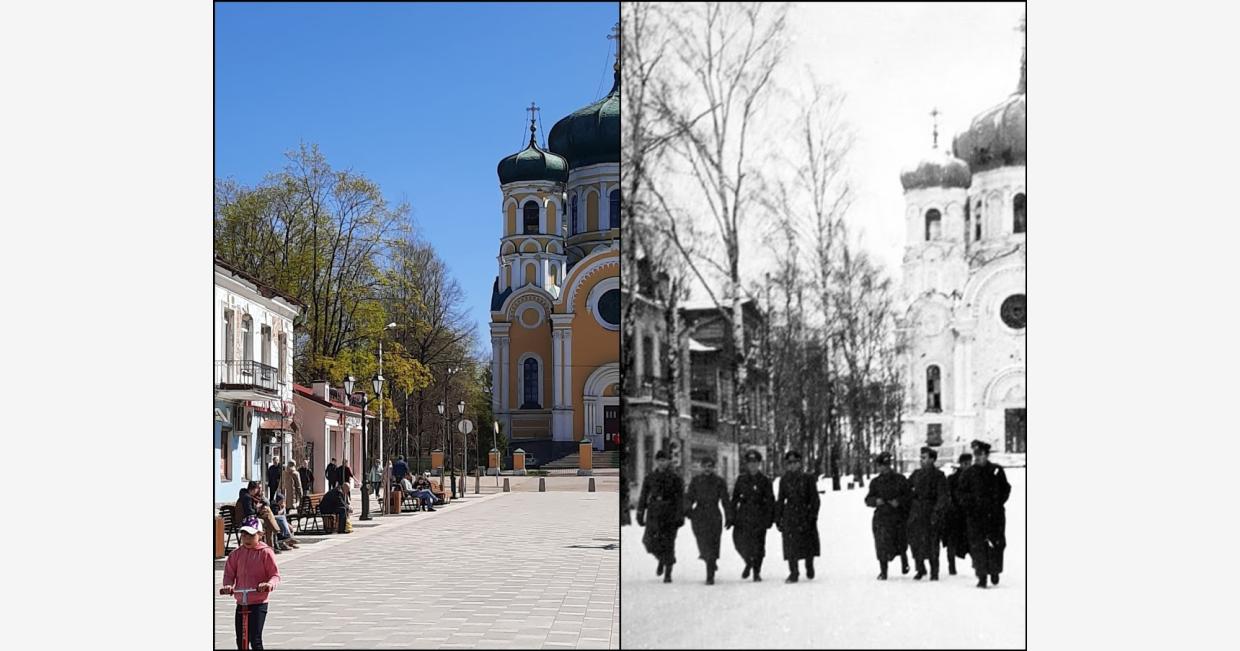 A group of German officers walking along the main promenade of Gatchina with the St. Paul's cathedral in the background. The original name of this street was Sobornaya, which stands for "Cathedral steet". In the Soviet period it was named "Sovetskaya" and after the fall of the USSR it was renamed back to its original name.

"The Germans didn't only give permissions to open churches but also provided significant material aid to their parishes. For example, "the Gatchina cathedral received 100 000 roubles for restoration works from the town directorate, while the priest Apraksin was personally given 30 000 roubles and 6 expensive church garments". In return they asked the clergy to conduct propaganda work for the German cause. In case of open resistance the occupiers murdered the priests. For this reason the chief priest of the St. Paul's Cathedral Alexander Petrov was executed... The man who replaced him was the 74 year old priest from Pushkin Fyodor Zabelin, who was first placed in the Gatchina concentration camp after the occupation.

In many cases the priests appeared the only intermediaries between the occupiers and local civilians. Under the fascist occupation they not only tended to their parishes, but also provided as much help as the could to the locals by cooperating with the new authorities: visited POW camps, supervised schools and orphanages. They tried to solve the food supply problem as much as they could, however this wasn't always possible. The protopriest of the cathedral Father Fyodor Zabelin, who appealed to the town commandant to allocate at least some minimal quantities of bread to the starving population, "was rudely pushed out of the Kommendatur despite his venerable age". At the same time the clergy was forced to conduct masses blessing the German army and proclaimed "many years of life to its chief for a final victory over Bolshevism".

The nationalist principle of Fascist policies was aimed at the extermination of ethnic Russian population and other ethnicities of the country. Many establishments in the town had plaques that read: "Not for Russians", "German soldiers only", "Russians not allowed". German occupiers did their best to underscore their scornful attitude towards the locals. The local headquarters of Gestapo was located in the house #19 on Krasnoarmeisky prospekt, where the inmates were subjected to humiliating interrogations and abuse. German soldiers went rampant and wild in the evenings. The eyewitness Grigory Novikov remembered: "Germans walked the streets with whips and treated the Russians they met very rough, kicking and slapping them... In the evenings drunk Germans crashed into houses and demanded young women. They came to my apartment several times but since there were no girls living there, they went away".

There were several brothels in Gatchina, which were first staffed with Estonian women, but further on they employed Russians. The women who worked for the Germans in "privileged" positions (waitresses, maids, launderettes, janitors, etc.), beside doing their main duties, had to have sex with the occupiers without questions or resistance. In case of rejection they would have been fired from their jobs at the very best. According to the locals, one of such brothels was situated in the house #35 on the prospekt of the 25 of October, another one was in Malaya Zagvozdka. There was a casino on Radistchev street."