Now and Then - Gatchina German occupation 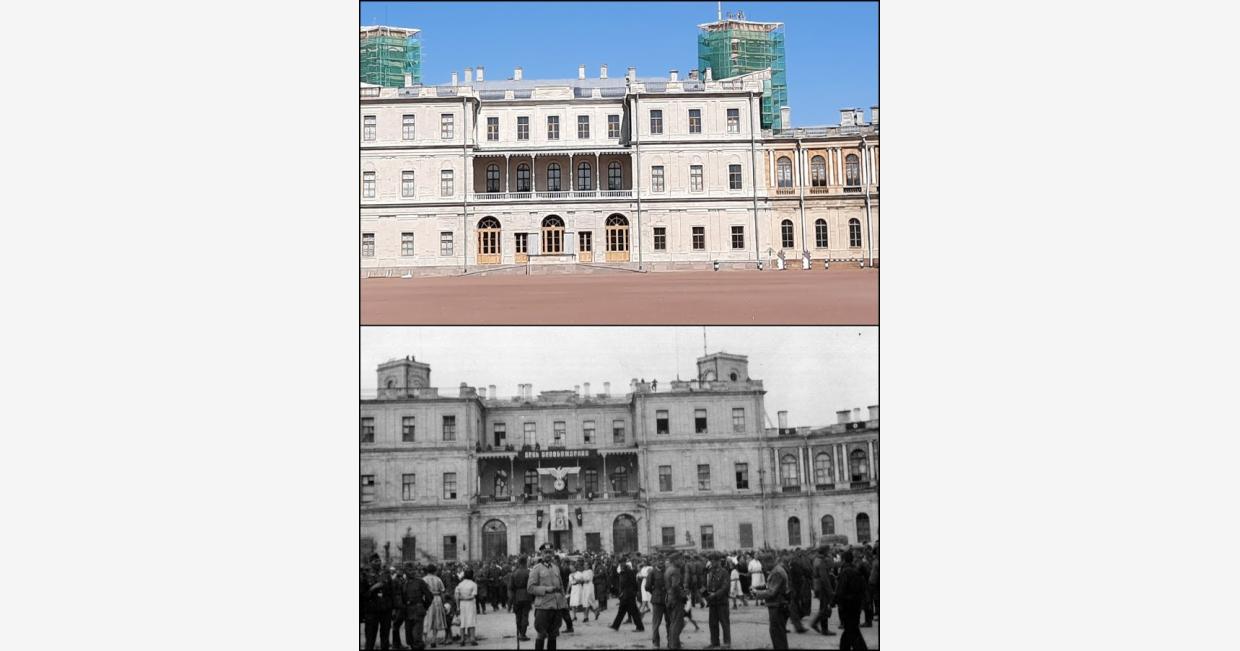 On the 22nd of June of 1942 and 1943 the Germans organised public festivities on the "Day of Liberation of the Russian People" on a grand scale, which the locals were "persuasively invited" to attend. The writing above Hitler's portrait and the Nazi eagle reads "Day of the Liberation".

From the diary of Lyuda Hordikainen: "Yesterday the two years' anniversary of the "liberation from Bolshevism" was celebrated. In the morning a long mass was held in the city's three churches, followed by the Procession of the Cross from the cemetery to the cathedral. Later on, at 1pm, there was a solemn meeting which we were invited to attend by the Propaganda Department and a military parade at 3pm... We happened to come late and had to lean on the wall in the theater's parterre. The meeting didn't last long, maybe for half an hour. The choir sang Russian folk songs. Then there were the following speakers: the city kommandant, who said that the war was being fought not against the Russian people but against Bolshevism, that the Russian youth (as the interpreter said) had a brilliant chance to fight for their Motherland, etc., some fat German read new land regulations, announcing that land would be transferred into private ownership. The third speaker was the head of the city council. Once again he repeated the same old stuff, cursing Jews and Bolsheviks... During these speeches there were cries from the audience: "That's right!", "True", etc. Had we known it would have been like this, we wouldn't have attended it."

Ironically, the palace was also liberated of its treasures: out of a total of 54 030 museum items, 11 929 were evacuated to Leningrad before the occupation, 3893 were recovered from Germany and the western provinces of the USSR, 38 152 items were lost forever. The palace itself was set on fire by the retreating German troops in January 1944.

In October 1941 Gatchina (renamed to Krasnogvardeisk in 1926 by Soviet authorities, unofficially renamed to Lindemannstadt in 1941 after the commander of the German 18th Army Georg Lindemann) became the headquarters of Einsatzgruppe A which implemented the policies of Holocaust and ethnic cleansing on the occupied territories. Over the years of the occupation, the city was thoroughly "liberated" of Jews and Gypsies while just a handful of survivors managed to hide their ethnic origins. Public executions and hangings were held regularly, with 100 people publicly shot and 700 people hanged on gallows built in the most crowded areas of the city. In 1942 public shootings were abolished as negatively affecting the soldiers' morale, however the gallows that were placed all over the city were rarely empty and dead bodies were left to hang for weeks in order to intimidate the locals.

According to the accounts of the locals, theft was one of the most severely punished crimes, and it was not uncommon to see street kids being sentenced to death for stealing matchboxes and scraps of bread. More than 900 patients of a mental clinic 10 kilometers to the south of the city were murdered by the SS by means of injecting phenol into their bloodstream on November 20, 1941. About 15 000 residents of Gatchina died of starvation and exposure, and several tens thousand Soviet POWs were starved or murdered in the sprawling Dulag which occupied several blocks of the city. This Dulag was noted for its particular cruelty even by German standards of 1941 as it was under personal supervision of SS Brigadefuhrer Walter Stahlecker, Heydrich's favourite henchman. The guards were free to do all sorts of abuse like dousing POWs with kerosene and setting them on fire. In September 1941, 170 Soviet POWs were locked up in one of the facilities of the local gramophone factory and burnt alive.

When the Red Army liberated the town on January 26, 1944, only 2500 out of the 38000 pre-war population of the town remained, the rest being either dead or deported to concentration camps further West.