Now and Then - German cemetery at the Alexander Palace 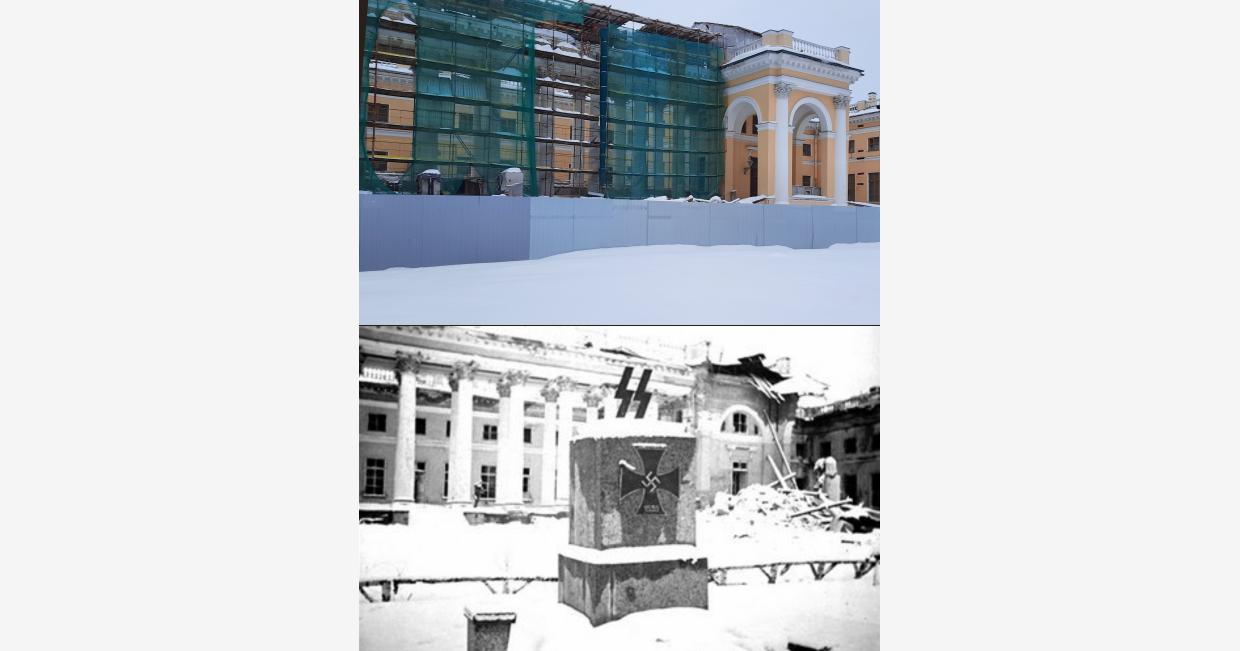 Cemetery of the 4. SS-Polizei-Panzergrenadier-Division in front of the Alexander Palace.

In September-October 1941 one of the sites where the town's 300 Jews were murdered was in the park just behind the palace and the victims were buried on the same spot in big pits. In total, around 9 000 of the city's residents were shot or hanged, and around 9 000 died of starvation out of the 35 000 people who stayed in the town by the time the occupation began in September 1941.

"I felt a lump in my throat when we crossed the former frontline. There was no sensation of winter here - the snow turned black after a huge number of explosions and deep craters furrowed thousands of hectares of frozen soil. A fiery whirlwind has raged here a very short while ago, desperate fighting for every tiny bit of soil went on. The corpses of the Fascists who ended their campaign at the approaches to our city so ignominiously haven't been carried away from the fields yet...

We passed by the Egyptian Gate - the entrance to Pushkin. The monument is all peppered with shrapnel and explosive bullets. To the right of the gate remnants of the Fyodorovsky Townlet towered as a sad pile of ruins and rubble - a talented work of the late Academic of Architecture Pokrovsky. Many premises of the Townlet remain only in the form of charred shapeless pieces of brickwork.

The same grim view awaited us ahead: tens of black smokestacks guarded the burnt debris of wooden houses, and gaping holes of windows in destroyed stone buildings seemed to watch us in reproach. The streets were empty of people.

We finally drove up to the Alexander Palace. The familiar amazing work of the architect Quarenghi was already visible through the bare tree trunks and branches. I wished everything had stayed there the same way it originally was, but alas... What we saw were deformed ruined facades.

Right in front of the splendid palace colonnade which connected the side wings of the building, a sprawling German military cemetery laid. Hundreds of birch crosses, aligned in perfect geometrical rows, seemed to us a loathsome symbol of the German "New Order"...

The Palace appeared to be devastated on the inside as well. As we were told, it was made into the barracks for the soldiers of the Blue Division [A unit of Spanish Fascist, Royalist, pro-Nazi and anti-Communist volunteers sent by Franco to aid Hitler on the Eastern Front - Alexander Shmidke], which barely managed to escape complete destruction [In February-March 1943 it suffered around 75% casualties resisting the Soviet offensive - Alexander Shmidke]. The right side of the central enfilade where the palace church was located was completely destroyed. The composite marble of walls and columns in the remaining gala rooms was inscribed with numerous swear words in Spanish and indecent drawings.

The former Emperor's half of the palace that belonged to Nicholas II [Starting from 1905 up to 1917 this palace was the de-facto main Imperial residence of the Russian royal family - Alexander Shmidke] was destroyed too. Not only the interiors of his rooms were not preserved, but even the internal walls between the bedrooms, the dining room and the study were ruined.

Of course, the chambers of the "Most August family" were of little artistic value - they bore stark evidence of the primitive Philistine tastes of the last of the Romanovs, reflected in the architecture and decor of their living rooms. However, it's sad that our descendants will never see, say, the bedroom, the walls of which were hung with hundreds of icons by the Imperial couple so steeped in religious bigotry.[These interiors have just been restored, however the complete restoration will not end sooner than 2023. See more information here: https://tzar.ru/en/news/1637886434 - Alexander Shmidke]

We left the Alexander Palace with a heavy heart, but it transpired that even more depressive sights awaited us ahead..."