Now and Then - German POWs in Tula 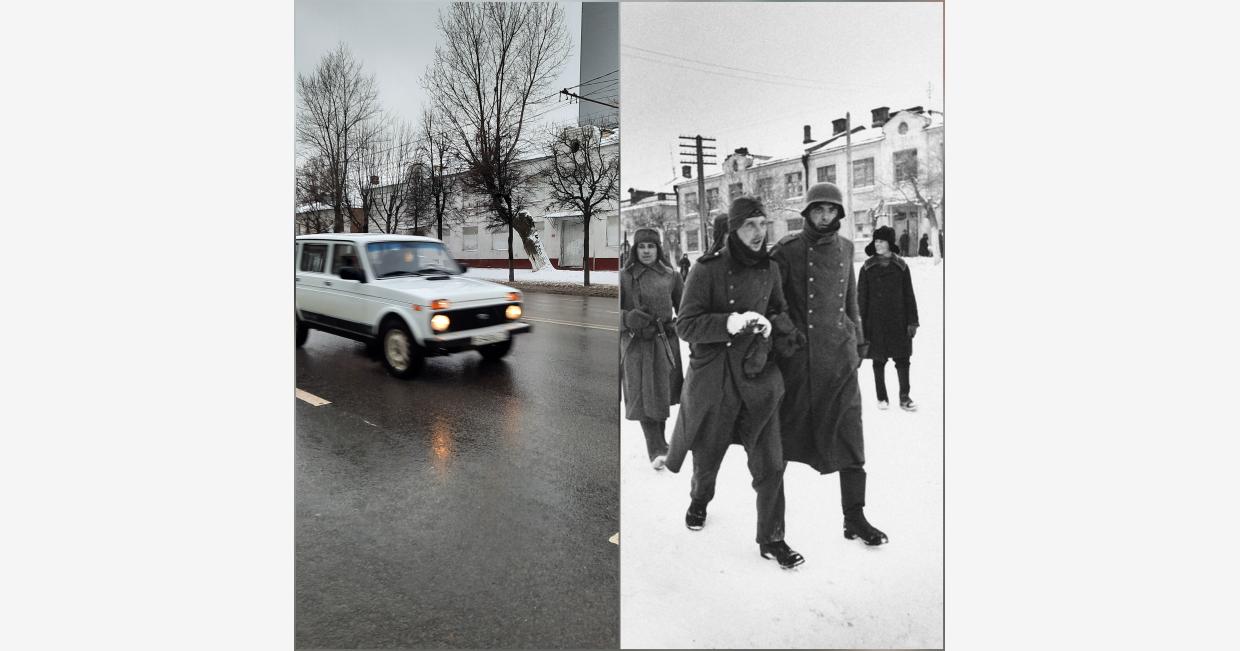 German POWs being marched along the streets of Tula

The only source of fuel that remained in the central part of Russia in November 1941 were the coal mines of the Tula province, which laid in ruins after the occupation. The last available human resource was used to rebuild them: "special settlers" and "special personnel", which stood for former Soviet POWs, convicts, Soviet Russlanddeutsche and German POWs. The main task of filtration camps for liberated Soviet POWs, namely weeding out enlisted German agents and traitors, was all but abandoned when the primary objective was to meet high production quotas. As a result, many innocent men spent years instead of expected months there.

According to the local historian Andrey Klochkov, former Soviet soldiers had relatively decent living conditions and were provided with food and basic amenities according to basic army norms. They were fed twice a day: in the morning and in the evening they were fed "balanda" soup, often made of rotten groats and spoilt vegetables. No one ever saw meat at all, and even stchi (Russian beef soup) was made with fish bones or herrings. This dish was especially loathed by German POWs.

Two filtration camps and three POWs camps were built on the territory of the Tula province. There are still people living in Novomoskovsk [previously called Stalinogorsk, located about 60 km to the east of Tula - Alexander Shmidke] who remember where German POW barracks were. According to Klochkov, Hitler's personal pilot, Hans Baur was interned in one of these buildings twice. First time he worked at coal mines and he was appalled by horrible working conditions there and complete absence of safety protection. He was quite right about it, as quite a few POWs and "special personnel" died of work accidents: electrocutions, elevator failures, falls, traumas and typical miners' diseases. Baur didn't like the coal from the Moscow region either as it couldn't burn without firewood. In his memoirs he wrote that the walls of the barrack were covered with ice and piercing wind blew in between the barracks. During his second prison term Hitler's personal pilot learnt to carve chess figures out of wood. According to his memoirs, it was his favourite pastime in the camp and every day he got better and better at this.

In the end of the 1940's women in white kerchiefs tied in an unfamiliar manner appeared on collective farm fields around Tula. These were the German women who were sent to the USSR as forced labour. They mainly worked in agriculture and taught local farmers to grow tomatoes. A special prison camp for Poles was located in Dubovka in Uzlovsky district. This prison camp happened to be "frozen in time", as this settlement still retained two storey barracks, special house for service personnel and a library, where many Russian families still live to this day. Next to this camp there was the "ghetto" - a settlement of Labour Army Germans [ethnic Germans who lived in the USSR in 1941 and who were deported and used as forced labour - Alexander Shmidke]. The outlines of the former camp are still visible to this day, only there are regular town streets instead of barbed wire fences and there's a supermarket instead of the guard tower. Locals wrote in their memoirs that Polish prisoners sang very well. Indeed, there was an amateur choir in the camp and the inmate Stankiewicz organised a choir for his countrymen from Vilno.

There was another interesting fact: local residents actively traded with the POWs. On the day when POWs were paid their wages (from 150 to 500 roubles, but those who performed less physically demanding tasks only got 75-100 roubles), local residents approached the gates of the camp with pies, doughnuts, pickles and tobacco, selling all this to the inmates. This was formally forbidden, but the camp administration turned a blind eye to this. According to Pavlo Gritsak, a former inmate of Uzlovsky camp: "When we got our wages, the trade at the gates flourished. Old ladies came and brought boiled potatoes, onions, cucumbers, tobacco, "cigarette paper" (the newspaper called "Moskovskaya kochegarka" which probably never read even by its editor), sometimes eggs, milk or even salo [unrendered pork fat, a traditional Russian and Eastern European dish - Alexander Shmidke]. The prices were as follows: a pot of potatoes - 5 roubles, a kilo of bread - 25-30 roubles, a piece of salo - 15-25 roubles, 100 grams of tobacco - 25 roubles, newspaper and cigarettes - 10-12 roubles".

Disobedient prisoners were sent to a penal camp, which was located in Plavsk [60 km south of Tula - Alexander Shmidke]. The fates of those who ended up there became know only a few years ago, when the documents of the documents of the POW camp Directorate #406 were declassified. The main category of prisoners who served their time in this camp were jailbreakers. One of such men was Karl Kurt Fitz, who escaped from Tula on December 6, 1947. The prisoner got so tired of his work in the USSR that he decided to escape from the camp and the country. He was quite lucky at first, making it to Moldavia very fast, and arrived to Kishinev in 6 days, probably by train. This is where he was held up and delivered back to his camp, where he was punished by serving a 3 months punishment term in Plavsk. Once a prisoner served a punishment term there for... romance! In the night of June 20, 1949 the prisoner Herman Willy Wurfelheinz hopped over a barbed wire fence of his camp in Oryol and headed straight to a house on Cherkasskaya street. This is where he met the lady he got acquainted with during the occupation of the city. The German Romeo was arrested at 3am while being on his way back to the camp.

For all the hardships, being dispatched to a penal camp for 3 months was considered a relatively soft punishment. The story of Herman Hans Schmidt is particularly illustrative in this regard. He took part in the fighting against the Red Army when he was only 17 and got captured in 1945. The young German tried to shirk his labour duties in the USSR by whatever means possible. He got so passionate at trying to avoid hard physical work that he deliberately struck his left leg with an axe twice. The Military Tribunal sentenced him to 5 years of labour correction camps.

Deceased POWs were buried in specially allocated places. The location of 20 such cemeteries is known already, but almost all of them are either completely abandoned or levelled. For example, the location of one such cemetery is known in Novomoskovsk, but the authorities don't want to know anything about it despite the availability of archival documents. These days there are memorials on the sites of mass graves of German, Hungarian and other POWs, while the burials of Soviet "special personnel" have not been found up to this day and their contribution to the victory hasn't been marked by any symbolical markers at all. Search activists and historians still have a great deal of work ahead of them.