Now and Then - girls in front of a 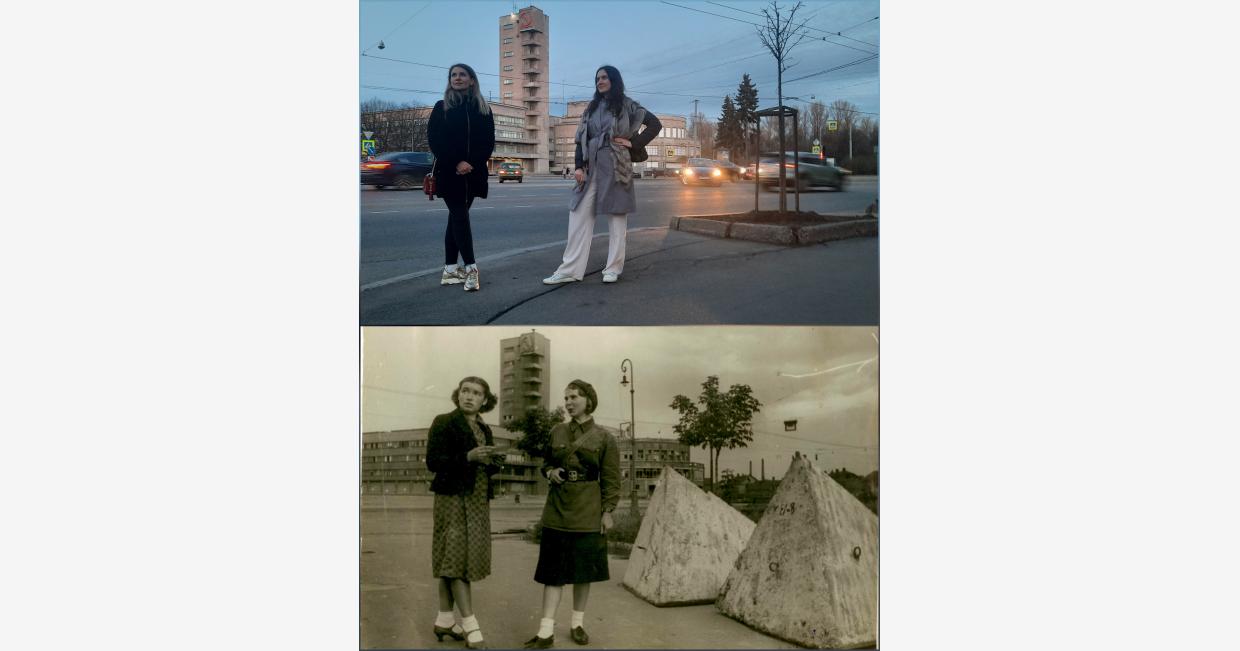 An MPVO [local anti-aircraft defense] lady and her friend photographed in front of the House of Soviets of Moskovsky-Narvsky district of Leningrad.

From the memoirs of Tabachnikova Evgenia Konstantinovna [published at Iremember.ru]. Born in Leningrad in 1923. Worked as a draught copier at the Leningrad Stalin Metalworks Factory.

"When Stalin spoke on the radio on July 3, 1941 and said about the formation of militia groups and partisans, a People's Militia regiment was formed at the factory. When we saw off the militiamen, they marched past the bust of Stalin. I and my friend went to the Young Communist League committee in order to volunteer for the army. They had no issues with Alexandra, she was taller and bigger than me, while I was petite and thin and they asked me: "How old are you?" - and I wasn't even 18. I spurted: "Nineteen!" They answered: "Fine, bring us your passport tomorrow". Our mechanical drafters taught me to erase mistakes in drawings on tracing paper and clean up India ink blots. I took my passport, erase the "3" in my year of birth and put a "1" in its place. But the passport wasn't checked anyway. On July 11 we were summoned to the Red Cross committee to sign the power of attorney. There was a practice among the volunteers who departed to the front to transfer their average monthly wage to their relatives. I gave the power of attorney to my grandma, and on July 12, 1941 we were already seen off to the army. There were thirty of us girls who went to war from our factory. The head of our unit was Eva Bravaya, if I remember correctly.

We were seen off to join the "Stalin's regiment". Solemn music played, we were lined up, there was a meeting - even now I'm a bit excited when I remember this. A solemn meeting and suddenly there was an air raid alert! Everybody ran to the bomb shelter. After the alert was called off we continued the meeting and we were taken to our regiment. There was even a newspaper article about it, it was taken to our regiment and shown to us. When I made a dash to the shelter I stumbled and nearly fell, and even this was mentioned in it. When we departed on July 12th, we wore our civilian clothes, we even had shoes on little heels. They told us to take only a change of clothes in the district Red Cross committee. We got our military gear only after pledging the oath of enlistment.

I studied to become a radio operator. They taught us how to shoot at the shooting range at Bolshaya Okhta. And then it happened that one night a combat alert was announced, and the regiment was immediately sent to the front and we, girls, were sent to the Mechnikov hospital. I worked in the 14th Pavilion: to be more precise, I and Shura [Alexandra] worked there as nurses. We dressed soldiers wounds, and took care of them - we did all the work. The first wounded who I personally saw being operated, was wounded by a shell splinter to the buttocks. And right in my plain sight the doctor delved into his wound to pull the shrapnel out. I felt my cheeks becoming cold, blood flowed away from my head, I became dizzy and felt like I was about to collapse. The doctor lady, who saw me losing consciousness, shouted at me - and it all went away in an instant. She ordered me: "Bandage him!" So that was the trick with the first wounded soldier...

We worked at the Mechnikov hospital until November 1941. In November the hospital became an evacuation hospital: right behind the building there was a railroad line and the wounded were evacuated by train. The hospital started getting slowly dismantled, it was said it was about to be sent to the front. At this time I got acquainted with one doctor from the 20th NKVD division - he came to visit one soldier. They were resting after Nevskaya Dubrovka [Nevsky Bridgehead] here. I talked to him, and I told Shura: "Let's go and ask them to let us go to the front. What's the point of staying here?" Besides, everybody was starving already, and the army too. Nowadays Siege of Leningrad survivors tell us: "You had it good in the army, it were us who really starved" - well, our ration was 300 grams of bread, but we were handed only 150 grams of bisquits which we could neither soak in water nor chew. And twice a day we had a bowl of millet stew where tiny grains whirled around each other. So we, girls, had all our female physiology disrupted by this starvation. Serving in the army during the siege was no vacation!"