Now and Then - Holocaust in Novgorod 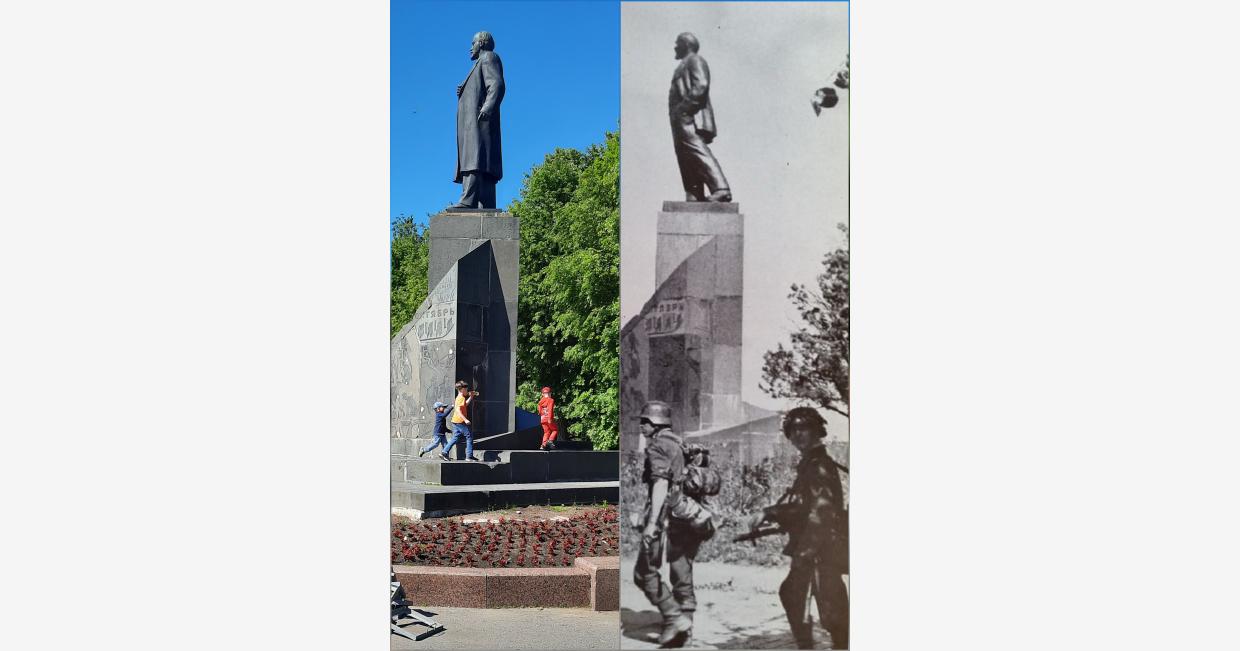 German soldiers walking past the monument to Lenin. A few days later it was toppled, broken into pieces and defiled. After the war a new monument was placed on the same pedestal.

In the course of fighting along the Luga Defensive Region from July 12 to August 12, 1941 the population of Novgorod was largely evacuated: 45 out of 48 thousand people were moved to the Soviet hinterland and Leningrad.

All remaining 3 or 4 thousand people who lived in Novgorod proper were resettled to neighbouring villages by German authorities after the occupation which started on August 19, 1941. Along with anti-partisan actions, wanton executions of local Russian population and robbing the locals of food supplies, the Nazis began their "Holocaust by bullets" in Novgorod and its outlying areas. By December 1941 the headquarters of Enisatzgruppe "A" reported that all territory south of the lake Ilmen was "judenfrei".

One of the Russian nurses who lived in the village of Kolmovo, which is now a city district of Novgorod, managed to save the Jewish girl Frida Rabinovich from imminent death. Here is her story, as relayed by her niece in her response to Yad Vashem's request.

From the letter of Vera Fyodorova to Yad Vashem:

"My name is Fyodorova Vera Nikolayevna, I'm writing to you from Novgorod. The letter your organisation sent me left me greatly agitated and made me remember and relive the terrible years of the Fascist occupation.

You are asking me to tell you in detail where, from whom and under which circumstances I first heard the story of the rescue of Frida Rabinovich.

Nobody told me this story. I stayed with my mother, Olga Antonovna Stolyarova, Ekaterina Antonovna Korolkova's sister, in the occupied Novgorod. And all our family directly took part in saving Frida.

Before the war we all lived in the village of Kolmovo, where a psychiatric hospital was located. Most adult residents of Kolmovo worked in the hospital, including my mother, aunt Katya [Ekaterina Antonovna Korolkova] and the parents of Frida Rabinovich.

Ekaterina Antonovna and my mother Olga Antonovna worked as nurses in the hospital. Frida's mother worked as a nurse in the dentist's room.

When Fascists entered the town, mental hospital patients were taken outside the town and shot, while the hospital blocks were used to accommodate wounded Red Army POWs and, separately, the German wounded.

My mother and Ekaterina Antonovna worked at the POW hospital, which received wounded and starved Red Army soldiers from Myasnoy Bor. Being malnourished themselves, they shared their last pieces of bread with the prisoners, because the Germans fed them with a thin stew with sour cabbage.

We, teenage girls, were forced to work at the hospital for the Fascists. When the Germans suffered large casualties and many of their wounded arrived, the German walked around in an angry mood and threatened to kill us.

In the winter of 1941, when the first snow fell, the kids ran into the courtyard. Frida played next to her house with the other kids. Suddenly an artillery shell [hand grenade in the main article on Yad Vashem website] exploded at that spot. One boy had his head torn off, another one lost his leg. Many others were injured, including Frida - she was injured in the leg by a piece of shrapnel.

This is what saved her, because she was put in a hospital while at the same time German punishers gathered all Jews of Kolmovo and took them to the town where they were kept under guard.

Once Emilia Borisovna managed to visit Frida in the hospital. She tearfully asked aunt Katya to take care of Fridochka and said she hoped to visit her daughter and take her home. However, she was never seen again. The rumour had it that the Jews were exterminated by means of "Gasenwagens", specially equipped trucks.

Aunt Katya took care of the sick child as much as she could. She and her family lived in the same communal appartment with the Rabinoviches. They got on well and cooked at the same kitchen. Aunt Katya lived with her mom at the time, my grandma Natalya Matveyevna. Aunt Katya had 2 kids - daughter Ekaterina Vasilyevna, born in 1922, and her son Vasily Vasilievich, born in 1926.

Her son was shot by the Fascists in 1941 after taking him for a partisan and her daughter was deported to Germany the same year.

Aunt Katya took Fridochka home from the hospital and raised her as her daughter. Sometimes, when aunt Katya left for her night shift at the hospital, she brought Fridochka to spend the night at our place. When the German patrol came in for a security check, she hid under the bed.

Once, when I was walking down the street and held Fridochka by the hand, a German soldier approached us and asked: "Judische Maedchen?" I answered: "No, she's Russian". Whether he believed me or not, he let us go. This is how we lived under the fear of death.

In order to save the child from the Fascists, aunt Katya found a Russian Orthodox priest and he baptised her. [She was given a baptismal certificate with an earlier date and for the name "Lyuba Korolkova", which allowed Ekaterina to pass Frida for her daughter]

When Soviet troops started approaching Novgorod in 1943, Fascists started driving local civilians away from the town. Aunt Katya, our grandma and Frida were sent to Latvia, while I and my mother ended up in Lithuania, near the town of Siauliai, Joniskis farming estate.

After the liberation of Novgorod in 1944 we returned to Kolmovo, while Frida and my grandma (mother of Ekaterina Antonovna) arrived a bit later. Aunt Katya went to Germany to look for her daughter, she managed to find her and they both returned home.

In 1945 Frida's uncle came to Novgorod, his name was Fima. When he learnt of the fate of her mother and sister, he cried bitterly and wanted to take Frida to his apartment in Leningrad. But Frida refused, she didn't want to part with our family. When uncle Fima came for the second time, aunt Katya persuaded Frida to go with him, telling her that her uncle would be able to give her a better education and take better care of her in general. The whole Novgorod lied in ruins, people had to live in cellars. Those who stayed under occupation had great difficulty finding work."

Frida regularly communicated with Ekaterina Korolkova till her death of cancer in 1950. In the 1990's Frida Rabinovich emigrated to Israel. On November 15, 1999 Ekaterina Antonovna Korolkova was recognised as Righteous Among the Nations by Yad Vashem.