Now and Then - Horse statues on the Anichkov bridge 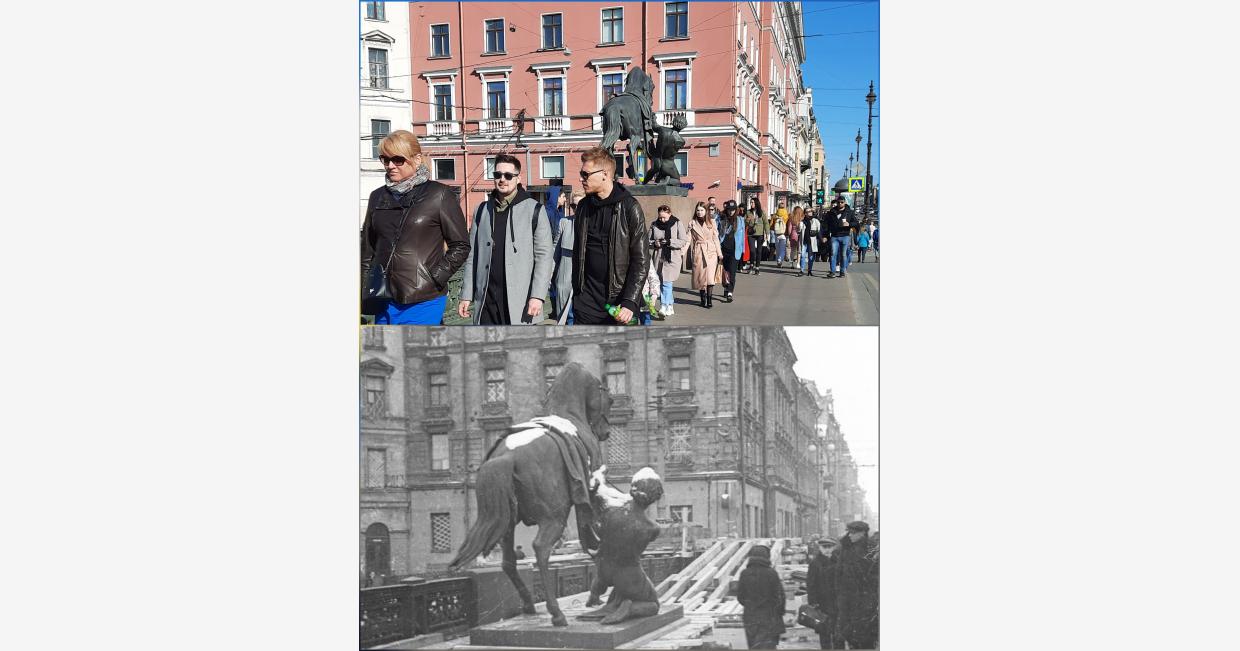 One of Baron Klodt's Horse Tamers statues taken off its pedestal and prepared for towing to the Anichkov garden. It was buried there in a big pit, where it stayed throughout the siege, and dug up and returned back to its place in June 1945.

Yesterday, while walking across the Anichkov bridge in the darkness, I saw Klodt's horses lifted from their pedestals and being towed away. At night I thought about them and the monument to Peter the Great, which had already been buried under the ground next to the Engineers' Castle and other masterpieces of art we're trying to safeguard. This evoked my thoughts about the entire city, and today I wrote an article with gusto, which I titled: "This won't happen!" Here it is:

"Winter night. Impenetrable darkness is only pierced by brief green lightnings. They are scattered by the bow collector of the tram creeping along the Prospekt of the 25th of October. Ah, yes, there are also ominous flashes reflected by the dark shroud of clouds: these are the bursts of artillery shells which the wild barbarians are lobbing at out city. While walking across the Anichkov bridge, I see: giant youths with horses, these wondrous Klodt's horses without which you somehow can't even imagine Leningrad, were taken off their pedestals, and now they stand on hugs wooden pads-sleds. They are tied to tracked tractors, today they will be towed some place away...

The mighty horse restrained by a bronze hand looks strange, standing not at the spot where it stood for exactly one hundred and one year, but next to the wall of a building on the corner, opposite to the windows of a pharmacy shuttered by wooden boards. In complete darkness its outlines are only visible against a snowy background. It's as if it jumped down all by itself and froze in deliberation for a moment: should it seek refuge from Fascist bombs and shells or linger for a bit more and stand by its eternal post just as all indefatigable Leningraders stand at theirs?..

No, we shall preserve our centuries-old values! We shall bury these horses under the ground just as we've buried many other treasured monuments. We will bring them to light again on that splendid solemn day when the rotting corpse of Hitler will go under the ground and the victory celebration of free nations will wash over our blood-stained planet.

On that day we will restore the broken fence of the House of Pioneers, we will build new palaces in the place of five storey buildings ruined to the foundation - the graves of our brothers and sisters, our children and mothers. We will strip the camouflage cover off the golden spire of the Admiralty. We will throw earth-filled sacks off the allegorical figures on Vorovsky square - they symbolise Faith, Wisdom, Justice and Strength, all of which we are rich in and which weren't depleted by the severe ordeals the besieging barbarian hordes have inflicted upon us...The marble statues of Italian masters Tarsini, Bonazza, Branelli, Borotto will rise in the Summer Garden again, reminding us that Italy hasn't always been a source of obscurancy and Hitler's petty knave...

Streets lit by bonfires from the books by Pushkin, Lermontov, Tolstoy, Gorky, from the genial treatises of the harbingers and founding fathers of our Soviet state. On these bonfires there will be charred bodies of our best people, their hands bound by barbed wire, raped women lying on the snow, children chopped to pieces - our merry, fearless children, schoolkids, Young Pioneers... At our gigantic factories there are we, proud and free Leningrad workers, turned into slaves. We are being forced to forge the weapons of death, turned by the oppressors against our Russian, Soviet people. We're being beaten by cat-o-nine tails for every slow movement in our hard labour. We're paid for this with starvation that kills us slowly... Right?.. Can human fantasy set the limit to the terrors the untrammelled German hordes might bring us if we allowed them to break into our dear Leningrad?..

No! Never! Never! Never!.. This will not happen!.. No matter how hard it is for us, whatever we are to endure in our selfless defense of our besieged city, we shall safeguard it from the enemy, we shall surrender to him neither our honour, nor our freedom, nor our bright future!

Our cause is just. We are unbending and indefatigable. We shall prevail!"

Translator's note (Alexander Shmidke): For all the dramatic propaganda tone of the article, the imaginary horrors depicted by Luknitsky appear to be quite realistic in hindsight. Many statues and books in the Imperial suburbs of St. Petersburg, which were deemed "un-Aryan" were either burnt or thrown away to rot in the open air, while the European art was looted and shipped to Germany. The statue of Samson in Peterhof, which was essentially as symbolical for Peterhof as Bronze Horseman was for Leningrad (and St. Petersburg), was dismantled and most likely melted for metal in 1943. Tolstoy's family estate in Yasnaya Polyana near Moscow was looted and burnt down by retreating German troops. According to numerous testimonies, nearly every tree at main street intersections of Leningrad suburbs was used by German troops to hang local residents for any minor transgressions, the dead bodies left to hang for weeks to intimidate the remaining population. As for the cases of mass murder and slave labour, they are quite well known and require no special clarification. 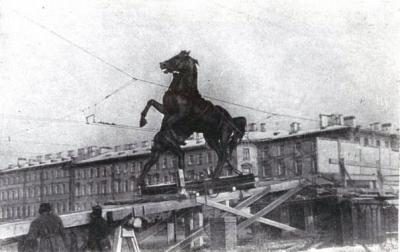 One of the statues being taken off the pedestal, November 1941 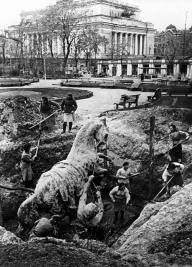