Now and Then - Ivanovskoye Bridgehead 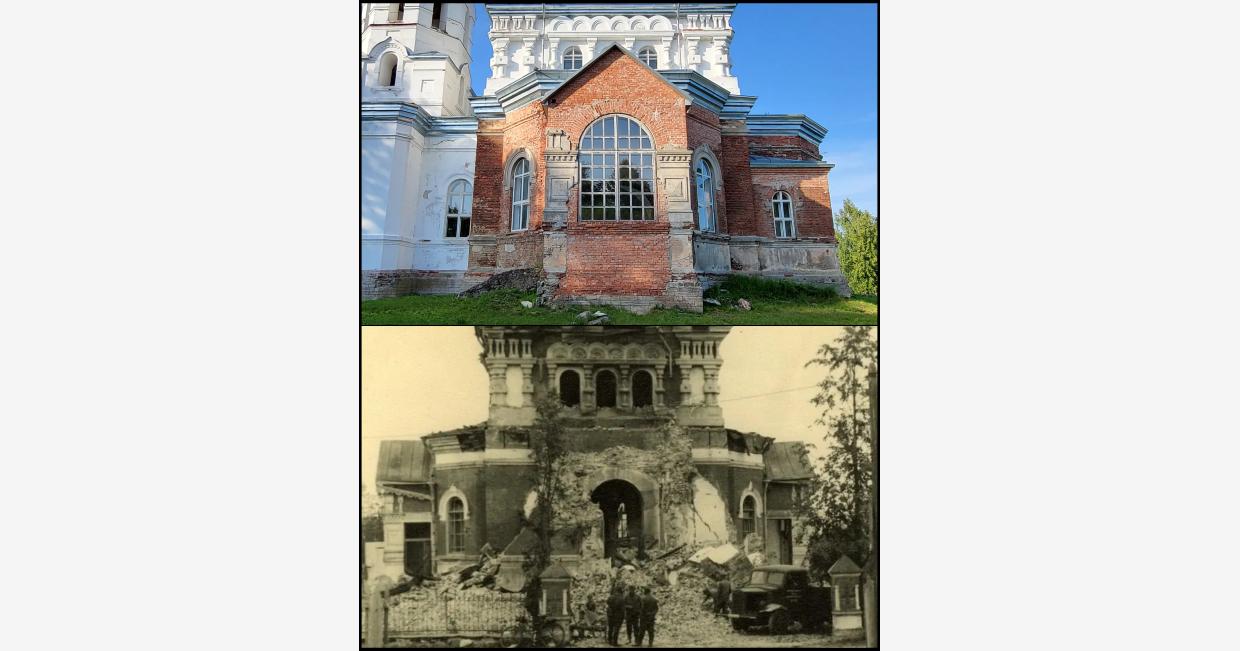 German soldiers standing next to the HQ of I.Battalion 4.IR (mot) led by LtCol von Waldenfels. I took this picture in August 2022 when I was preparing a Luga Bridgeheads tour for a group of history enthusiasts from St. Petersburg. Unfortunately the front view was hidden by tree branches and I took this picture from the side so I'll have to wait until late autumn to take a proper comparison photo. The events which unfolded around this church could have had a dramatic impact on the battle - see Raus' memoir below.

On July 12th, 1941 two Panzer divisions of Army Group North were suddenly issued an unexpected and unorthodox order to make a sudden dash across 100 kilometres of thick forests and bogs, the kind of terrain deemed completely unfit for tank operations at the time, in order to capture two bridgeheads across the river Luga. Having faced stiff Soviet resistance at the approaches to the town Luga, only 170 kilometres from Leningrad, they were sent to the area where they were the least expected. After crossing more than 100 kilometres in 2 days, building bridges and corduroy roads, the 6th Panzer Division seized a bridgehead on the bank of the river Luga which, as the division's Kampfgruppe commander Erhard Raus admitted in his memoir, was "the most difficult bridgehead he ever defended". After the incredulous Soviet Northern Front commanders received reports of tank columns traversing impassable terrain, they threw whatever few forces they had immediately at hand to contain the German expansion. These were the 2nd People's Militia Division, hastily raised with volunteers from Leningrad factories, a third of whom didn't even have basic rifle training, and a tank battalion made up of tanks and cadets of the Leningrad Higher Tank Officers Training Courses. Right upon their arrival they engaged the enemy from all directions, often having suicidal courage alone to oppose their enemy's vastly superior organisation, training and communications.

"In the Ivanovskoye area, only some isolated local actions took place. One attempt, made by weak Russian forces advancing from the north to push along the reservoir up to the bridge at the lock, was easily repelled. However, the effects of one surprise attack, launched from the forest by a Russian infantry unit which advanced from the west accompanied by one superheavy tank [KV-1 - Alexander Shmidke], were more distressing.

This attack was aimed at paralysing the German operational control which, as the Russians presumed, was centered in the vicinity of the church. Although, through a counterthrust, we were able to quickly drive back the Russian infantry troops who had broken through our security line, the superheavy tank emerged from the forest and drove with such speed and so close past the well-camouflaged 100mm gun that there was no possibility to fire it. The tank circled the church and crushed everything which appeared suspicious, including our regimental headquarters.

Our tanks were powerless because their fire had no effect on this monster. At long last, one particularly plucky noncommissioned officer put an end to this critical situation. He jumped on the tank and kept firing his pistol into the driver’s vision slot. The latter, wounded by bullet spatter and his vision obstructed, was compelled to turn back in an attempt by crossing the Russian lines to force his troublesome passenger to abandon his ingeniously chosen position. Shouting and swearing, the driver of the tank again passed the 100mm gun. Not until the moment they were just about to cross the German lines did the noncommissioned officer jump off the tank, leaving the giant-size vehicle to its fate. Thus the smallest weapon had put to flight the heaviest tank. However, no sooner had the tank reached no man’s land when it burst into flames, struck by a direct hit from the 100mm gun."