Now and Then - Kaluga Ghetto 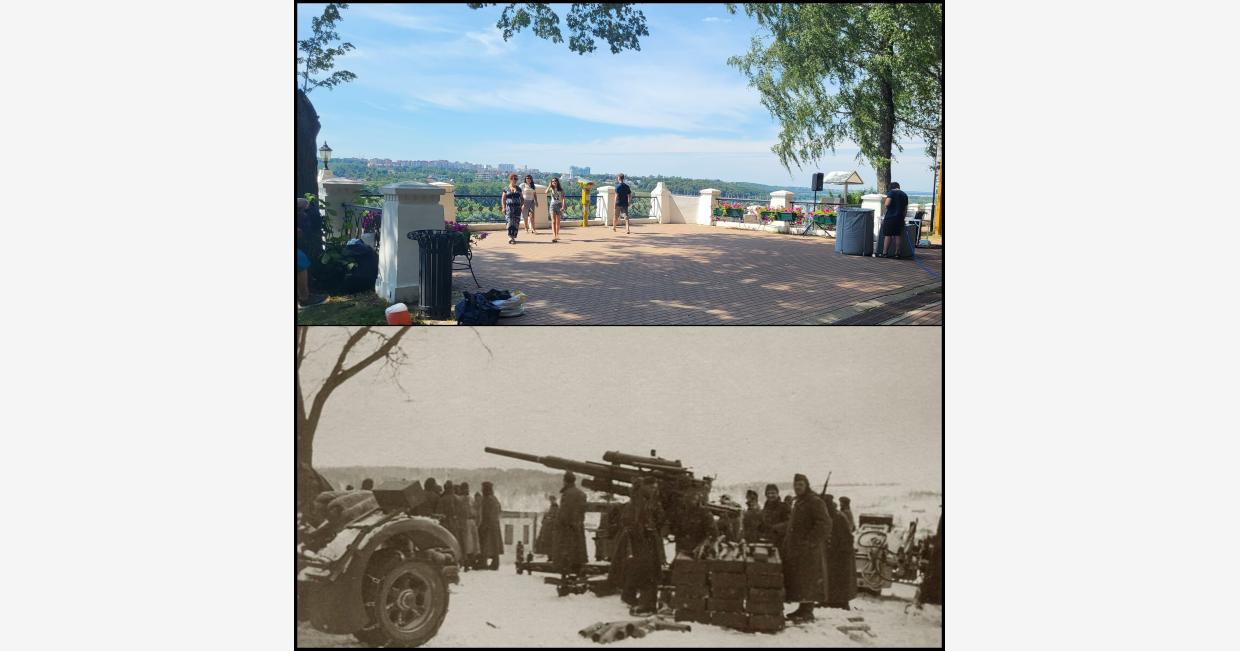 A gun from an 88mm Flak battery at the high bank of the river Oka.

Just before my trip to the Kaluga province I didn't collect information about the battles that took place there during the war or the fate of the city during the occupation, hoping to quickly glean whatever information I needed from quickly googled articles during my train ride to Moscow. Eventually, I only learnt about the existence of the Jewish ghetto in Kaluga only while driving there from Moscow with my friends. On the one hand, this must have been the first thought to cross the mind of anyone dealing with WW2 and Holocaust history in Europe, however I was sort of misled by the history of the occupation of the Northwestern areas of the USSR, where the Nazis under the command of the most ruthlessly effective SS leader Walter Stahlecker immediately proceeded to "Holocaust by bullets" without waiting for the Final Solution to be announced. This was the reason why no ghettoes, except the Riga ghetto, were organised in Army Group North area of control, and all Jews the Nazis could immediately capture were exterminated before December 1941. When I stayed in Kaluga I decided to visit the local synagogue, but since we came there very early there was no staff available, only a security guard who was courteous enough to provide us with a newspaper article about it and pointed out the location of the ghetto on the map. We drove up to the Kazan monastery, built on top of a high cliff overlooking the river Oka, and noticed a small memorial built by the kids from a local school. The question why even a simple granite slab hasn't been put up there so far is a difficult one, considering the number of Holocaust memorials that have been built across the country in the last decade. Both the town authorities and the local Jewish community have made numerous statements declaring their willingness to commemorate the ghetto, and probably funding is the real issue here. According to the latest newspaper articles on the subject, the plan is to build a memorial "in the memory of both ghetto victims and Red Army soldiers who liberated them with yellow and red stars on it".

From the article in "Moskovsky Komsomolets - Kaluga":

The Jews were herded into the so-called "Cooperative settlement". The inmates could only take what they could carry in their hands or pull on sleds. During the resettlement they were subjected to mockery and abuse. Local German-appointed policemen robbed them of their belongings, money, musical instruments. The Ghetto Headsman was appointed after the first visit of the head of the police to the "Jewish quarter" after the resettlement. After the proposal to "elect a Yid headsman from your Yiddish kahal" the candidature of the accountant M.I. Frumkin was proposed. He was ordered to submit the lists of all "Yids and Yidlings". The headsman was to watch the order in the ghetto, appoint guards and select able-bodied inmates for forced labour.

The ghetto consisted of 155 inmates, whereas one woman was identified as Jewish and taken to the ghetto after the registration; she was brutally beaten. There were only 17 men of work age; 64 persons were over 60 and disabled. There were also 46 children under 14. The number of inmates was reported by the newspaper issued by the occupation authorities next to the article on the Protocols of the Elders of Zion.

Announcements posted on the town's electricity and telegraph poles read: "No work beside removal of horse carcasses is available to the Yids". Local policemen "welcomed" the Jews before the start of their work by the words: "carry by your hands, gnaw by your teeth". Leaving the ghetto was allowed only 3 times per week from 8 to 11 during the "non-market days". It was forbidden to visit the bathhouse. Any communication with the rest of the townsfolk was forbidden under threat of execution. All city residents received coupons for pickled cucumbers. The coupons handed to the ghetto inmates read: "Yids are only allowed to take half of the portion". However, not once they were allowed to get even such small amount.

Several inmates died of starvation. Medical aid was not provided - the head of town healthcare department forbade his former colleague, his former colleague, to open a medical post. Germans and policemen systematically visited the ghetto and robbed the Jews of warm clothes, bed linen and blankets, kitchenware. There was no organised resistance, however a 12 year old David Khanin (his brother, a Young Communist League member, was executed in the first few days of the occupation), cut a telephone cable and fixed the writing on a propaganda poster from "Hitler the Liberator" to "Hitler the Enslaver".

The life of Kaluga ghetto inmates teetered on a hairpiece throughout the 1,5 months of the occupation. Once they were herded on a street and stood in the cold for several hours, waiting to be deported to the Kommandatur. However, the execution didn't take place on that day. One elderly Jew was doused with gasoline and set on fire in front of the crowd. In the last 10 days of December the Germans made a chaotic attempt to exterminate the prisoners - the ghetto was set on fire. Several elderly and sick people died on that day. German soldiers opened fire at the fleeing Jews, killing and wounding some of them. In extreme cold the Jews were not allowed to enter the houses of the town's Gentiles, who were warned that "15 Russians would be shot for each sheltered Yid". Despite the announcement, many local townspeople let the Jews in and saved them from certain death. In total, around 25 Jews died in Kaluga during the occupation. When the Red Army entered the town on December 30, 1941, it was the first ghetto in Europe to be liberated from the Nazis and abolished.