Now and Then - Kronstadt gun on Anchor square 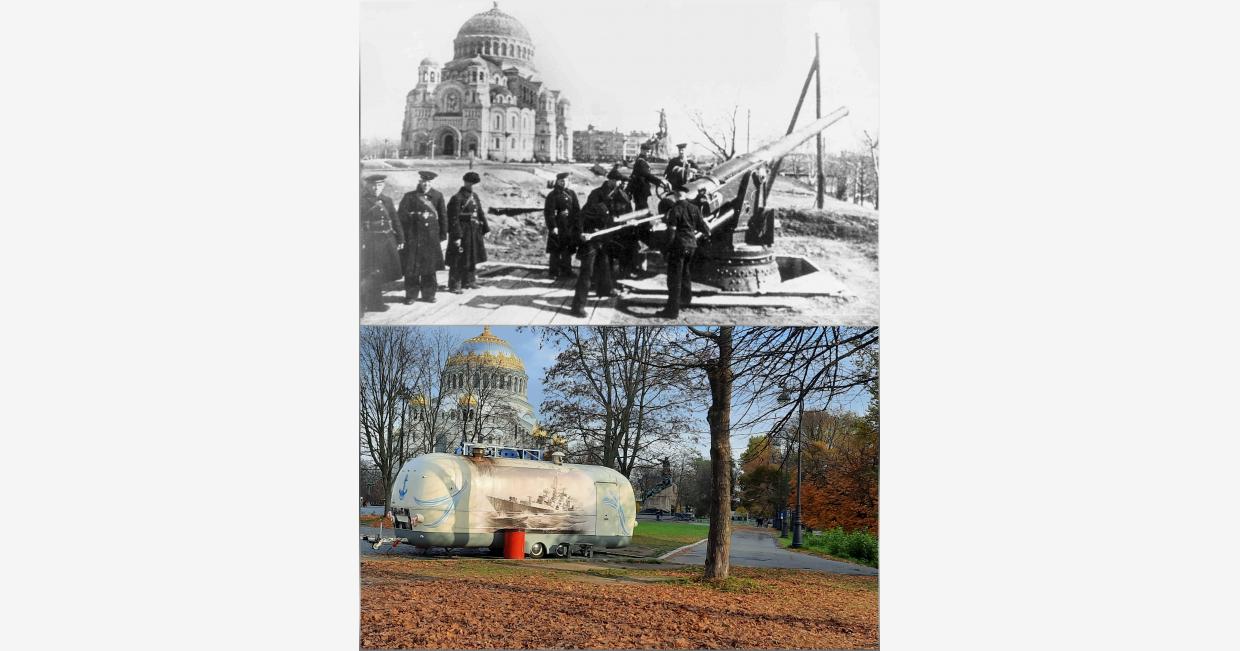 Kronstadt, square of the Victims of the Revolution. 1942 / Kronstadt, Anchor square. October 2021

A 152mm gun of Lieutenant Naryadchikov's battery preparing to open fire at enemy positions in the area around Peterhof. The Kronstadt Naval Cathedral of St. Nicholas and the monument to Admiral Makarov can be seen in the background.

"At the Tuchkov bridge we waited for a long time till it got completely dark: speedboats depart only in the night. But this moonlit night was so bright it could hardly offer us any cover. Nevertheless, everything was very quiet. Only occasional signal flares went up from time to time.

Smokescreen boats followed us, going between us and the coast. Black outlines of their wary little were clearly visible in the moonlight. We sat on the deck until we started shivering with cold, and then entered a small room where it was forbidden to smoke since it was facing the enemy-held coast.

In Kronstadt (we arrived there late in the night) we were met and escorted to the Navy House. The moonlit town was absolutely quiet. A patrol checked our passes on the square, using a flashlight with blinds, holding it low at the very ground level. Anyway, the yellow light was completely dissipated by the moon. Her head and eyes were wrapped in gauze

Here the war is even more palpable than in Leningrad. Streets are even more deserted and damage on buildings is even more ostensible. Hundred years old chestnut trees are maimed by bomb splinters. I met a woman who was taking her child to change his wound dressings. His head and eyes were wrapped in gauze, he hung loose over his mother's shoulder, his hand wagging in the air. The boy was wounded three days ago during artillery shelling. It's wrong there are still kids remaining here. I would take them out of here, all of them.

The image of the ship where we performed still persists in my eyes. [Here Inber speaks of the battleship "Marat", which was sunk in the harbour of Kronstadt near the main pier on September 23, 1941. After an airstrike the bow part of the ship was destroyed along with one of the main 3x12 inch gun turrets with 326 sailors killed in action. Due to the shallow depth of the sinking site the ship was only half-submerged and its remaining part was recovered thanks to the close proximity of port cranes and repair services. Two of its 4 original turrets were put back into action only a month later, on October 31, 1941, to the great chagrin of German propagandists and Wehrmacht soldiers in field positions close to the Gulf of Finland. After lengthy repair works the third turret was put back in operation on November 3, 1942 - Alexander Shmidke] Effectively, it was no longer a ship but a fortress which grew into the water. Last year enemy dive bombers inflicted deep wounds on it: the turrets lost connection between themselves and fought disjointedly as separate fortresses.

When the commander of the central turret sent a messenger to the bow turret, he reported back that such turret no longer existed, and the Kronstadt Cathedral could be seen through the gaping hole in its side.

An entire mountain of rusty, horribly deformed metal, lying on the stones next to the stones of the breakwater near the ship, is what was extracted from it after the fighting. Even being immobile, it's still fearsome to the enemy.

When its remaining turrets open fire, we can hear them in Leningrad. And Yevfrosinya Ivanovna [Vera Inber's maid - Alexander Shmidke] says: "God bless!"

Our literary performance took place in the wardroom where it was warm, even hot because of the close proximity to the engine compartment and because of the large number of people who came to listen to us.

The town in general is a veritable naval nest. There are very few women in the streets. Standing in the courtyard of the Navy House, I can see a racked fish in one of the windows: a fair haired actress from the frontline brigade is sun drying a whitefish she received from her grateful listeners.

And the listeners are grateful here indeed."