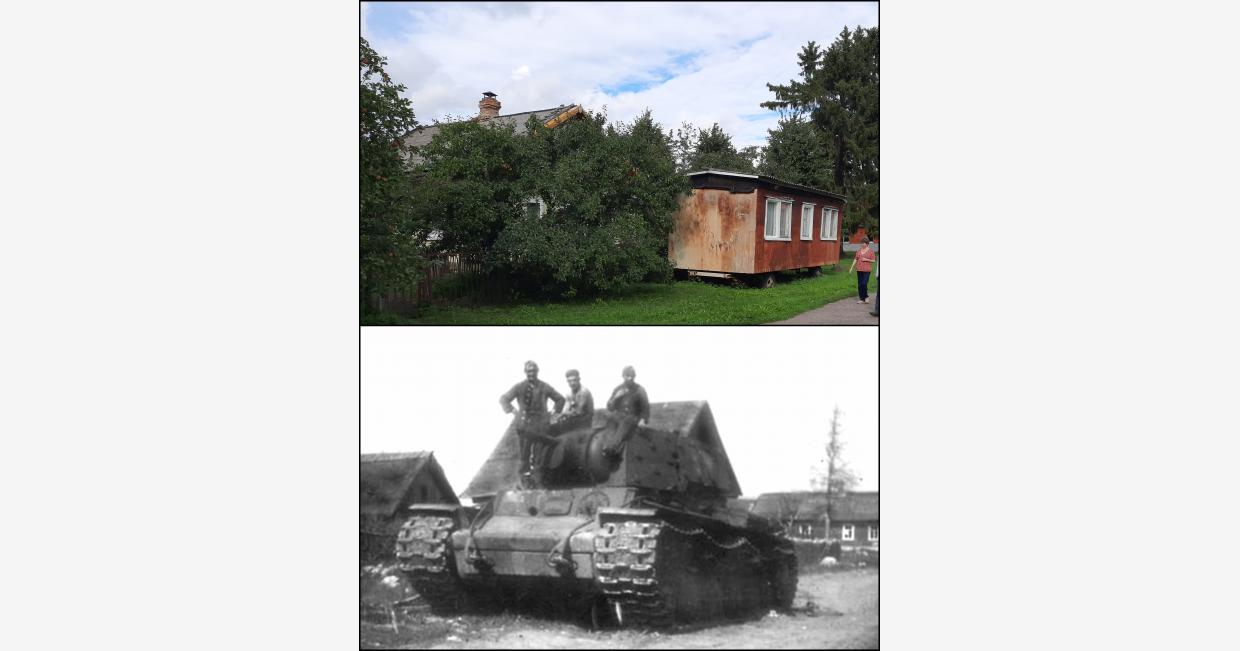 German soldiers sitting on top of a KV-1 tank of the 1st Red Bannered Tank Division destroyed by an 88mm gun. On August 11, 1941 the Leningrad Front committed its last mobile reserve in an attempt to contain the German breakthrough from the Luga bridgehead. Instead of deploying for a proper counterattack, the 1st Red Bannered Tank Division ran into the units of the 1st Panzer Division in a meeting engagement. With its units scattered over a large area, its anti-tank guns deployed on open positions and without air cover, the division suffered very heavy losses in a couple of days at the cost of destroying several dozen Panzers. The position of this particular tank was shown to me by a local villager who said the tank stood there for many years after the war until it was scrapped for metal. With all wooden houses on the picture burnt down or demolished over time, only the tree on the right side could be used as a reference point.

The honorific "Guards" title was given to the division "in advance" at the time of its formation, in contravention to the usual practice of awarding this name for excellent battlefield performance. By doing so the city leadership expected it to become a morale boost and a kind of "credit of honour" which would oblige the volunteers to fight harder to live up to their Guards title. However, as the first battles showed, slogans and honorific titles could not make up for lack of weapons and training.

The division first entered combat on August 11, 1941, organising partially successful counterattacks against the breakthrough of armoured divisions of the 4th Panzergruppe for several days. On August 14 the militiamen started fleeing from their positions, having lost most of their artillery, with their supply lines disrupted and communications with their commanders severed. By August 16 the remnants of the division retreated to Volosovo in panic, having lost about 50% of its personnel in 5 days.

"The division got unloaded from the train in Volosovo. We drove off by 5-6km and set up our positions in a forest near the train station of Vruda and villages Knyazhino and Moloskovitsy. On the same day our battery shelled the village of Knyazhino. There were German soldiers, they fled into the forest.

Rare short trees and shrubs. Our guns were deployed on a small forest meadow. Shell crates lay on the grass not far behind us. Grooms took the horses aside to a nearby forest. A German reconnaissance plane which looked like a U-2 appeared and started circling around us. The plane had 2 optical devices on its bottom. One of our soldiers shot at it from his rifle. Then another one, and then hundreds of rifles started firing at the plane. And yet it kept circling above us and then turned back and left. In a few minutes we were engulfed in a squall of mortar shells whistling through the air. Having barely touched the ground, the shells exploded, shredding people with their fragments. The entire meadow groaned. The wounded shrieked in unbearable pain, the dead remained lying on the ground. This was our first encounter with the enemy, the first baptism of fire. We had to change our position as fast as possible. German planes persistently pursued and bombed us, and their guns shelled us every time we stopped at a new place."

This place on Google Maps