Now and Then - Liberation of Gatchina 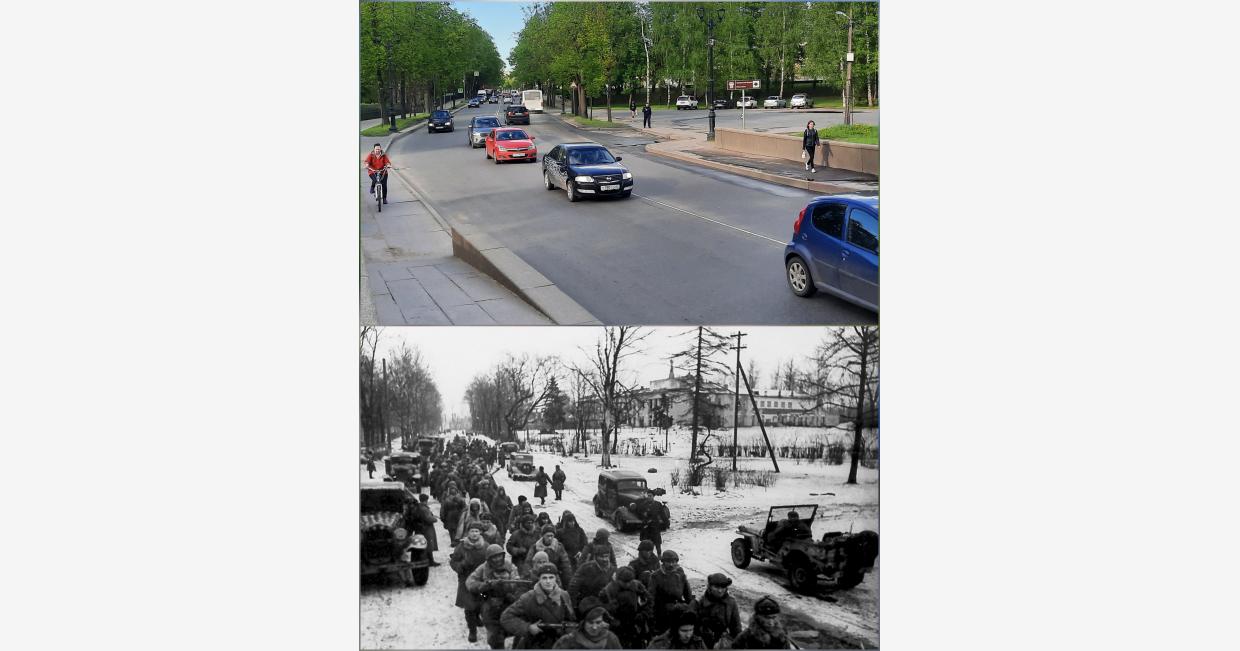 Extracts from the diary entry from Feburary 1, 1944.

"Yesterday I went to Duderhof, Gatchina, Pavlovsk and Pushkin as part of a group of artists and museum staff. On the way back we drove past Pulkovo. There were employees of 3 museums with us: from Pavlovsk, Gatchina and Pushkin palaces. If only one could see the stark sorrow in their eyes when they first faced the devastation in these towns...

There used to be a granite ball on top of a tall obelisk at the entrance to the park in Gatchina. The Hitlerites knocked it down and planted a huge swastika instead of it. When we were approaching the park we saw that this swastika, mockingly covered in crow faeces, had already been dismantled by our troops and lied at the foundation of the obelisk. What remained of the Gatchina Palace was, as the museum staff said, an "architectural ensemble": the general outlines of the building, its concept and the proportions of its parts. The Germans weren't going to surrender Gatchina. Quite the opposite, they herded people from Peterhof and Strelna here. At the last moment, when our troops were already entering the city, the fascists doused the palace with termite liquid and set it on fire. Flames burst out of every window, leaving black trails of soot on the outer walls in their wake...

Right at the main entrance to the palace, near the facade there are two allegorical Italian-made statues: the War and the Peace. Both of them were perfectly preserved in these wooden cases. The Gatchina palace-museum employee was so glad to see them as if they were alive. She was the one who hid them in these cases [buried under the ground before the town was occupied].

One of the palace walls bears an inscription in German made by a chemical pencil: "We were here..." and further on, verbatim: "When the Ivan comes, everything here will be empty". It was followed by the address: "Richard Wurf, Stettin, Uhlandstrasse, 2. Telephone D-28-10-43".

So where is this "Wurf" (which means "dash") now? Isn't he the one who was dashed into the snow somewhere between Gathina and Pavlovsk, naked, half of his head smashed, with clots of bloodied snow instead of eyes, lying dead and prone? An SS patch was visible sticking out from under the snow. We saw plenty of such corpses. Terrifying and loathsome marks of Hitlerite occupation in Gatchina: a prison, surrounded by two rows of barbed wire, "officers' club", signs in two languages, Russian and German: "Pawn shop", "Bakery". And their "owners" names: Eisen, Maslyannikov.

During the liberation of Gatchina our troops found about 4 thousand civilians herded into the town. Here's a man in rags, frail, pale, with a bandaged arm, staring and staring at us - he still can't have enough of us, those who came from Leningrad.

A new life is springing up on deserted roads and by the bridges, the one of a military and nomadic kind. Little bonfires are burning, water from melted snow starts boiling in little pots. By the looks of it, a horse has just got slaughtered somewhere near. There's a "campaign office" on another road intersection. Right in the open air there stands a writing desk and a chair, hauled from a former German dugout. A man in a sheepskin hat concernedly blows at the ink in a little jar, warming it up with his breath. Two small our tanks are stuck in the river Izhora, bearing inscriptions "For Leningrad" and "Suvorov". Both of then were hit, and icy water tirelessly washes their wounds, painting itself with rust as if it was blood. On the way back we saw a large group of POWs, about three hundred men."