Now and Then - Lifting of the Leningrad Siege Day 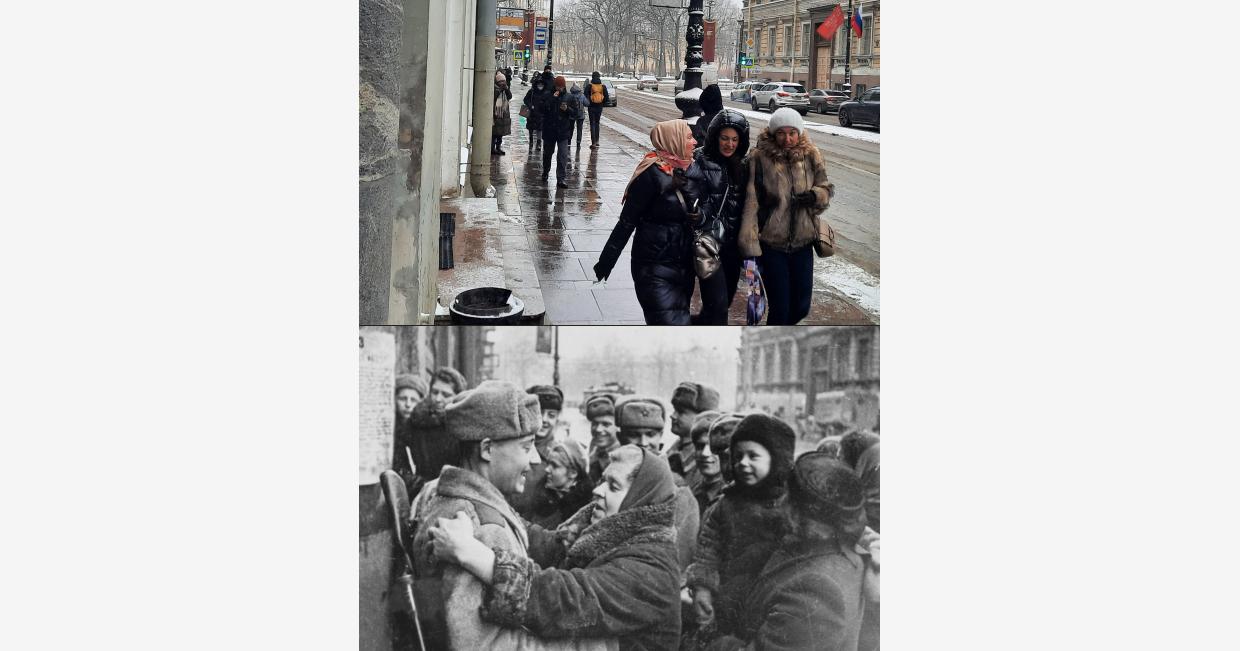 An old lady congratulating a Red Army soldier on the announcement of the lifting of the Siege of Leningrad.

This day, sometimes nicknamed "Leningrad Victory Day", is commemorated by numerous meetings at war memorials in the city and the wreath laying ceremony at Piskaryovskoye cemetery. The pre-war population of the city was 3 000 000. According to February 1944 census, Leningrad had only 546 000 residents, 80% of them were women working at factories.

Diary entries and memoirs about this day.

"January 27, 7.30pm. In a quarter of an hour the announcement of the lifting of the Siege of Leningrad will be broadcast. There will be a gun salute. Historic and solemn minutes! Now one can start making a summary of the 2,5 years of the siege. We've been through so much: what a load of grief, worries, pride and tenacity, deep sorrow and inexorable sadness! Can this all be expressed by words? I'm behaving disgracefully. At about 6pm I got a call from the district Committee and they told me there would be broadcasts, and now I feel like I have a metal ball in my throat. I keep weeping and weeping. I can't stand this being seen by others and yet I couldn't help crying at work. I ran away to the canteen of the district executive Committee and I'm sitting at the table there and crying. I came back home to bring myself to senses and sat down to write these very lines. A solemn voice came out of the loudspeaker: "Attention, attention, an important announcement from Leningrad will be broadcast... Listen to our broadcasts!" In front of me there's a heap of telegrams - victory congratulations. How can I not think about my Stchenik [husband] now? Somewhere in the area where the fighting is coming to an end, his body lies, already unrecognisable.

Or maybe it's not there at all. Maybe, he was tortured to death somewhere in captivity. Who will tell me about his last minutes, and when? How was all this for him, what did he feel, what did he think about? Will there ever come such time when I'll be able to think about this without the boundless terror of sadness?
And there's no one to share my sorrow with, because I don't want to spoil these joyous moments for others. And this is how it will be for the rest of my life. Any joy of mine will be darkened, poisoned by my sorrow.

My mom, my poor mom, looking so terrible with her eyes full of sadness, so dear and so close to me...

All I can do is cry alone.

I even regret I wasn't whacked by some stray piece of shrapnel.
A 320 gun salute, 24 salvos! I'm going to the street to watch it."

Extract from a memoir:

"When the offensive aimed at lifting the siege of Leningrad started in January 1944, a special reinforcement group was formed from among the medics of our division and sent to the 64th Guards Rifle Division led by Romantsov, the former commander of our 10th Rifle Division, and I ended up being part of this group. We liberated Krasnoye Selo, there were many wounded. Once we took a truckload of wounded to Leningrad.

Having handed them over, we decided to drop in at aunt Polya's place, to drink some tea. Just as we sat down for it, suddenly there was an announcement the siege was lifted. We ran outside into the street. The people around were dirty and black with soot, they cried, kissed, complete strangers hugged each other. And there was a gun salute and fireworks - it's the first time I saw anything like this. I think I've never seen such fireworks in my life. Even on Victory Day there was no such joy as what I saw on that day."

Extract from a memoir:

"In ten days after the start of offensive only 3 SU-76 remained in the regiment. The regiment commander ordered me to collect "dismounted" driver-mechanics and take them to Leningrad to Yegorov Tank Repair factory to pick up reinforcements and vehicles. We rode there on an APC.

When we made it to the Pulkovo Heights we saw the whole sky over Leningrad covered in searchlight beams and bursts. Having decided it were the Germans again who tried to bomb the city out "before the curtain fell", we decided to wait this air raid out. Since we were pressed for time, I ordered everyone to lie down on the APC floor and that's how we rode into the city. But we weren't able to make it far cause the streets were literally clogged by people. Covered in soot and dirt, we were dragged "into the light of God", kissed, hugged, people tried to throw us in the air, shoved wine and vodka in our hands".

"January 27th. Today is a joyous day for us, Leningraders. At 19.45 radio announced the decree on the complete lifting of the siege and that the enemy was throw 60 and 100km away from Leningrad and that now we are not going to be shelled by artillery - it is a great joy for us, because we were not sure about our survival before, as any minute a stray shell could end one's existence, and now these fears are gone.

At 8pm we had a gun salute and fireworks which I watched from the roof of our workshop: they launched coloured rockets by the bundles, bunches, up to 20-30 at a time, searchlights were on and guns fired. Today morning I heard Gatchina was liberated, but probably there's nothing left of it".

"January 27th. All tram stops were back in their places [By 1943 German heavy artillery sighted its targets in the city so well it could accurately fire at tram stops where people amassed to wait for trams. In order to reduce casualties and confuse the Germans it adopted the practise to suddenly move tram stops a few hundred meters back or forth - Alexander Shmidke] The evening looked like Easter night. It was warm and dark, quiet, big stars all around in the sky, lots of people. Even policemen went out of their way being courteous. A crowd around every loudspeaker. Complete strangers exchange short phrases, the meaning of which is only known to Leningraders. A solemn voice starts reading the decree. Everything goes quiet, trams stop. Disjointed shouts can be heard, someone is crying, people sneeze and snivel. After the phrase about 320 guns comes the applause. We walked from Eliseevsky to Anichkov and back. Some military unit stopped by the roadside and thunders with laughter. Excited boys run around. And suddenly the sky around went dazzlingly bright".