Now and Then - Luga partisans part 1 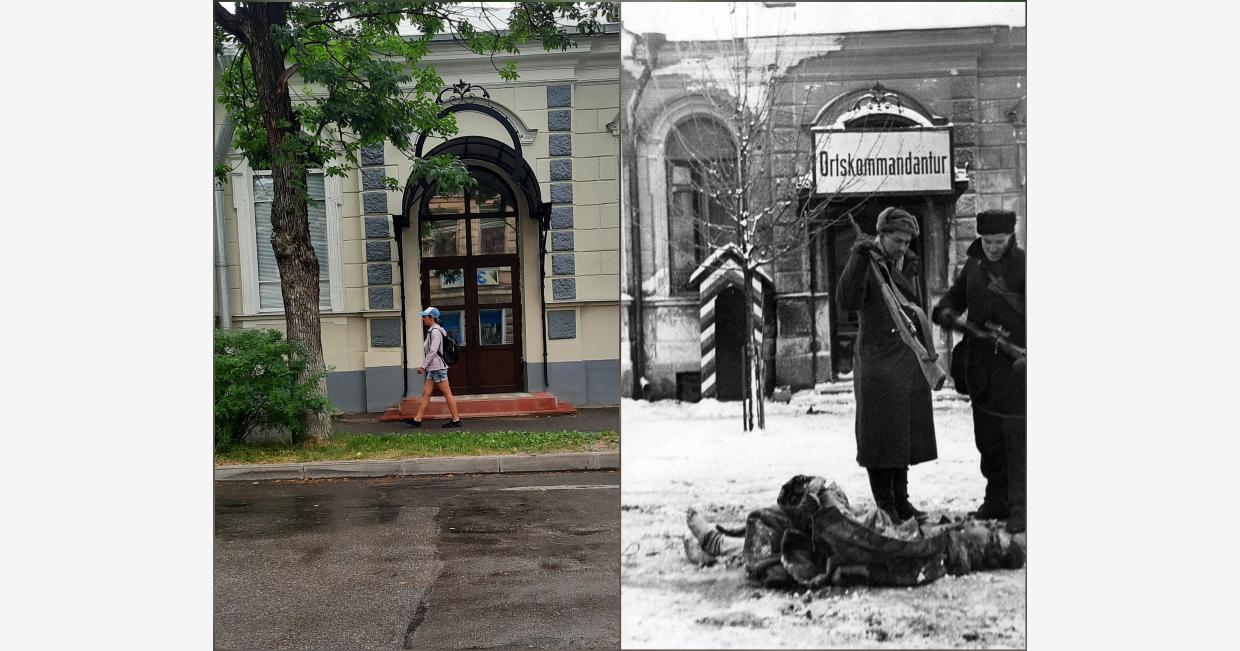 Partisans standing next to the body of a dead German soldier or a local collaborator next to the entrance to the former military commandants' office.

From the memoirs of the partisan Nikitin Alexander Alexeyevich, born in 1928. Taken from the book "Occupation of the Luga District of the Leningrad province during the Great Fatherland War. Eyewitness memoirs" Luga, 2014. Translated, shortened and edited by Alexander Shmidke.

"...So how did I end up becoming a partisan? When I worked in Tolmachevo (village near Luga) in 1943, I felt the times were becoming restless judging by the Germans' behaviour. And they started paying somewhat less attention to us and stopped herding us for forced labour. And there were quite a few of us, mainly young people. And we conspired to escape to the partisans at dawn - so we pulled our slanted overcoats on and off we went along the road to Pskov, then across the Luga river and made it home across the floodplain. This was in the autumn of 1943. We came home then and the village elder told us: "Listen, kids, the partisans are going to admit you to their unit. I'll send you along the road to Verkhutino" - this is where the Germans gathered young people to build a road. We came there and worked for a short while. The partisans found out there were many young people, and the partisan movement started growing large by that time, and they raided the work camp to get us. And there were no Germans - only Poles [probably Polish nationals conscripted into Wehrmacht]. And they were stationed right there too. This was on December 25, I remembered it cause they celebrated their Catholic Christmas. So I heard shooting all around. And we rushed downhill immediately. The Kommandant was a Pole, and when we ran across he started shooting from the machine gun, but he clearly took no aim and had no idea what he was shooting at.

These Poles joined the partisans, like everyone else. They fought alongside us later. The entire work camp became a partisan unit, and there were about 80-100 in it, and about 8 Poles. And then we went to the Chyornoye lake. This is where our U-2 planes flew and delivered us weapons and mail and evacuated the wounded. Not a lot of them came, though. They also brought food, like crackers and cookies, but it was all for the commanders, we got no such things. Our unit comprised two companies, or maybe more. Then there was a separate women's company. All the submachine guns they delivered us were given to the women. Our squad was named after our commander Stepanov (Anatoly Fyodorovich), he was killed during the liberation of Oredezh on January 30, 1944.

When we went on a mission for the first time, I think it was Mshinskaya (January 14 or 15, 1944). When we got there, the Germans were fast asleep and they just stayed lying there dead in their underpants. We blew up telegraph poles and and rails. We were all loaded with equipment. I had an anti-tank grenade. It was quite a heavy little bastard. Where would I carry it? I had a gas mask bag, that's where I kept it. I had lots of rifle rounds too. I had frag grenades (I don't remember how many) and TNT charges with safety fuses. So we tied this safety fuse to a poles and blew it up, and this was enough. There were days when I would get back and my shoulders were aching from all this burden. Oh, and I carried a rifle too. I didn't even notice how a bullet came through the handguard and tore off a part of it.

When the Germans realised what was going on they pulled an armoured train. They started shooting from it and we retreated. We carried our wounded next to us and they groaned all the way. Someplace further there were horse carts waiting for us, so that we could put the wounded on them. But it was a whole 20 kilometers from Mshinskaya to our camp, and we needed to pull the wounded by their coats to get to the carriages. I remember we carried one such guy, Valya Bogdanov from Betkovo, and he was wounded in the stomach. He had strong pains and just keep crying "Shoot me!" He was wearing an overcoat at the time, I don't know where he got it. So we dragged him along the snow by the flaps of this overcoat for about a kilometer across swampy watery ground. And then we put him on a cart and took him to the camp, and there was a hospital on that side where the brigade set its camp. The Germans didn't pursue us, they just shot at us from their train. Well, it was a success overall. I only lost half of my rifle's handguard. This is how my young years passed.

We also went to sabotage the railroad, but without success. We approached it in the night, but there was a German patrol, they walked around it all the time. We crawled close and planted the TNT charge - our intel said a military train had to pass there. Then we walked away from the rails, burying ourselves in the snow. Then we heard the Germans coming along the railroad, and they saw it, no matter how hard we tried to disguise the spot. We had a rope fuse with us, which we were meant to pull when the train approached - the so-called "fishing rod". However, they didn't follow this rope, and we immediately retreated. They got afraid - they also wanted to live, and there were just 2 of them and they didn't want to face a whole squad of partisans. They didn't want to charge into certain death. And we didn't shoot either and retreated. There were older and more experienced men than I, they knew what they were doing. So I didn't go to rail sabotage missions any more."