Now and Then - Luga partisans part 2 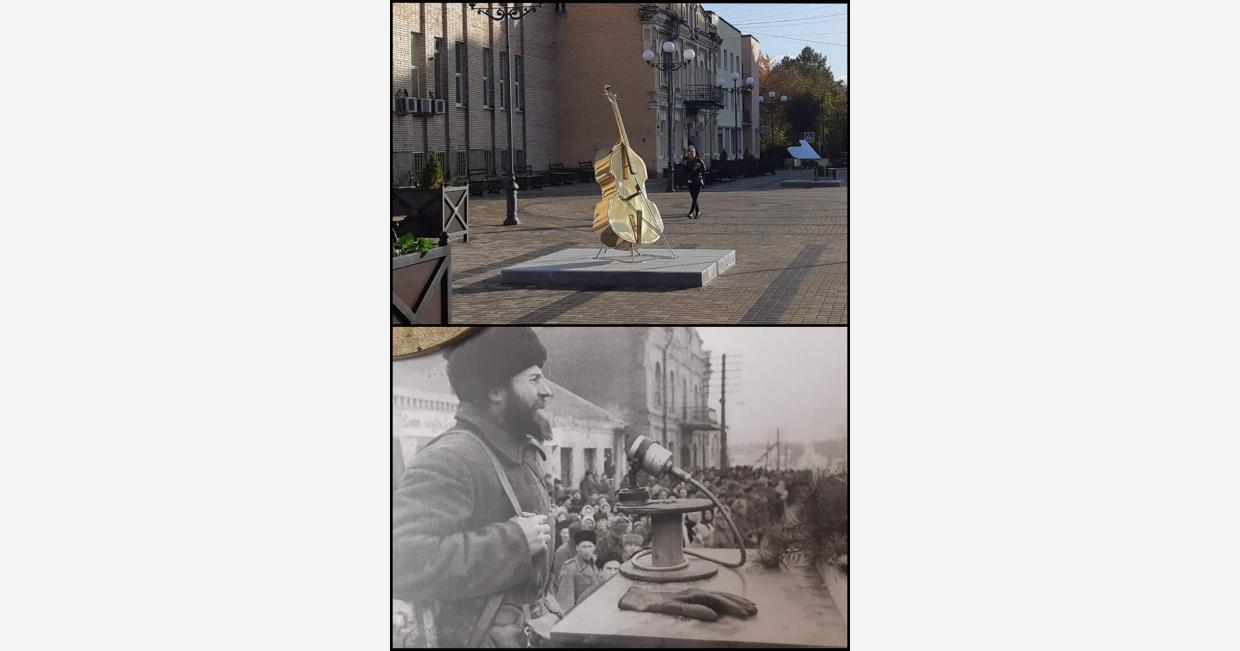 Organiser of the partisan movement in the Luga province, Commissar of the 9th Partisan Brigade, Member of the Military Council of the 6th, 9th and 12th Partisan Brigades, First Secretary of the Luga District Communist Party Committee, Ivan Dmitrievich Dmitriyev ("Comrade "D") delivering a speech at the partisan parade in the honour of the liberation of Luga.

From the memoirs of the partisan Nikitin Alexander Alexeyevich, born in 1928. Taken from the book "Occupation of the Luga District of the Leningrad province during the Great Fatherland War. Eyewitness memoirs" Luga, 2014. Translated, shortened and edited by Alexander Shmidke.

"And then there was that Oredezh. This was in the very end of January. We waded waist deep in the snow - and it was a boggy place. When you drive to Oredezh bogs are all one can see. And I've just remembered we crossed that bog. When we needed to smoke we did it by covering cigarettes with our hats, so that no fire could be seen. So our squad attacked Oredezh from the side of Panteleevichi village. The plan was that other squads had to arrive from the side of Batetsky district, while we had to capture and hold Oredezh. And they didn't arrive. We had to retreat with great casualties. So many people died there, so many people. Two people from our village died: a lad and a lass. And it's hard to tell the total number of the dead. I know the squad commander Ivan Anatolievich Stepanov got killed. I remember the Commissar ordering to recover his body. I don't know where we buried him though. So many people got killed! That's partisan's life, as it is. Not just partisan's though: it happened at the front too: a lot of panic, chaos, the commanders' skills leave much to be desired. So many wounded were left behind! A lot of wounded girls were burnt alive. That's it. The wounded were left behind, and we, the healthy ones, just fled. Simply fled. We only managed to blow up a train car full of TNT. Now that was a massive explosion! A full carriage of TNT - that's something!

When we crossed the alley near the train station, a young lad was killed on the spot, a machine gun loader. Just a young lad. However, we captured some Germans too. About 12 of them. (Son's interjection: A lot of dead bodies were left under the hill, both their and ours) More of ours...

[According to the accounts of partisan commanders, 38 men were killed and 51 was wounded in the entire operation which took place on January 30, 1944. According to the plan, the partisans were supposed to link up with the 377th Rifle Division, but it wasn't able to reach the area, having encountered stiff resistance from German troops. The partisans captured Oredezh train station and held it for the entire night of January 30/31, blowing up several train carriages of explosives and a number of gasoline trucks. When it became clear there would be no help from the Red Army, they were ordered to retreat just German reinforcements with tanks and motorised infantry started arriving from Luga. When the partisans fled, soldiers from Wehrmacht units and the 4th SS "Polizei" division collected both dead bodies and the wounded the partisans left behind, doused them with gasoline and burned them down. - Alexander Shmidke]

And then they started pursuing us. We went to the village of Khabalinka and on the other side of the lake there's Patrushina Hill. Just as we started crossing the lake, the Germans caught up with us and slaughtered a great many people. They started hitting us with shrapnel - this is when I felt very scared! The shells exploded somewhere above the ground, in the air. It hit everything with such great force it was terrifying! We had to dig ourselves into that frozen ground...

Then we went to our camp at Chyernoye lake. We came there in the daytime and all our camp was burned down. There were many of our wounded left behind there, but thankfully they all managed to escape and hide from the Germans. These Germans were much better armed anyway. Only our group commanders had submachine guns, everyone else had rifles only. They even gave me a rifle without a sling. I found a rope somewhere and tied it to the rifle.

That's how the Oredezh operation passed. We walked out of our camp in the evening, walked for 20 kilometers for about 4 hours, there was fighting for 6 hours, then we retreated, spent some time under Patrushina Hill and then 20 kilometers back. All all this time we had neither food nor drink. Oh gosh, what food are you talking about? Take a paratrooper, for instance, he gets cookies or a chocolate bar, these calories can really sustain him. It might not be a lot, but still some sort of sustenance. And we got nothing! I didn't even see any dry bread there. I remember we dug up some rye from village pits and I ate it like it was rice. (Chuckles) I really wanted to eat, I even ate tree bark.

So I ended up becoming a partisan when this movement was at the very peak of the action. And this Oredezh operation - what kind of heroics was it? The town was captured by storm, but so many young untrained lads got slaughtered. I know and remember all that.

And then we marched on to Luga. We were told to capture it by storm. But there was no storming as the Germans just abandoned it. We entered it freely - they just fled. [according to several other accounts the Germans left several infantry squads to provide delaying rear guard action - Alexander Shmidke].

I remember there was our partisan parade there. We marched across the square, and there was a podium. I don't remember where exactly - so much time has passed! I hadn't even been to Luga before, just once maybe. And yes, we had a parade. We had red ribbons tied across the front of our hats. Everyone had them, they were mandatory. God forbid getting captured by the Germans while wearing them. "Partizan, partizan!" And there goes a bullet straight through your head."