Now and Then - Maly Kazachy lane 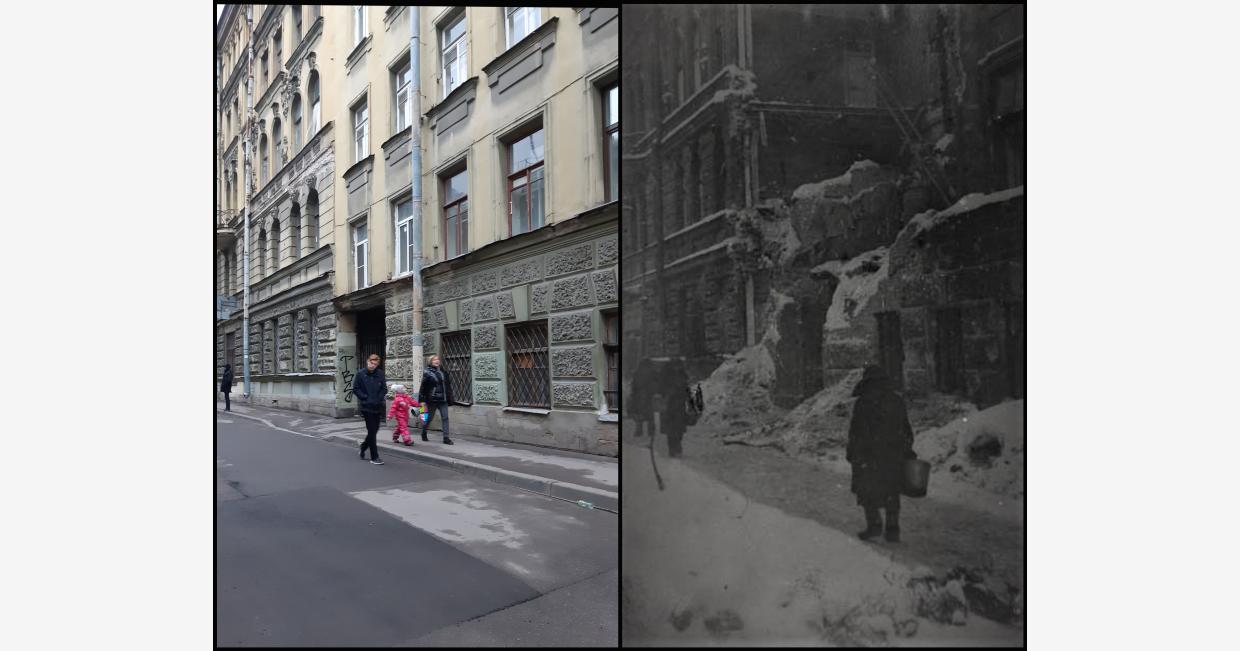 Leningraders walking along a path in the snow-driven street to haul water from a hole in the ice of Fontanka river.

From the diary of Boronina Ekaterina Alexeyevna (1907-1955). Children's writer, Siege of Leningrad survivor.

"The city's water supply has been inactive for the 4th day. The entire city is hauling water. They carry water, dead bodies, firewood. Fires are becoming increasingly more frequent. It's impossible to put them out. Bread lines. No water at the bakery combines. There are ever more deaths. No light anywhere. The radio has been silent for the fourth day. We haven't heard any news bulletins. We subsist on rumours. The cold is terrible - from -25C to -30C.

The Union [of Writers - Alexander Shmidke] is a complete mess. Nobody works. The frost is desperately bitter there. Kugel's son is dying is a small room of "Zvezda" editorial office. Panfilov's daughter is right there too. She's creeping with lice. Roza Solomonovna is lying on the sofa. Diarrhea. Horror. Toilets don't work. It's about -10C in the canteen.

Yesterday and the day before yesterday telephones didn't work in the city either. Artillery shellings. Kronstadt fires back. The blaze of fires. People take apart [wooden] houses and fences.

"Now radio isn't working either. We have no idea what's going on there. And they say the Germans are coming at us in a zigzag pattern".

I walked along the Kirovsky recently. There was a tram conductor by my side. We talked. I told her: "They're gonna increase our bread rations". "Really?" She was so happy. "What's going on at the front?" I tell her it's not going to be easy to drive the Germans away from Leningrad. They are being encircled. They'll all be exterminated.

"It's such a right thing you've said. That's so right. They all have to be exterminated. All of them. For our torments, for our dead".

"A relative of mine managed to escape from the Germans", said the conductor. "It's better to die of starvation here in Leningrad than live under them". We say farewell to each other.

"God bless you with health, you're such a sweet person", said the conductor.

Valentina Mikhailovna's story about a woman who cooked aspic jelly from human remains. She was shot. They're looking for her accomplices. Today I saw this jelly at the marketplace again. I went to the hospital on Sunday. I performed [read poems and delivered speeches - Alexander Shmidke] in two wards, spoke to the wounded for a long time. The morale is good. They kept asking me about the city. The hospital is cold, there is no water.

These dastardly politruks [political officers - Alexander Shmidke]. They gave me no extra food.

Politruk Morozov, the duty officer at the kitchen, declared: "There are lots of the likes of you hanging around. You've got your rationing cards, so use them".

Water freezes in pots and pans in the kitchen, although I heated the stove yesterday."