Now and Then - Nakhimson square 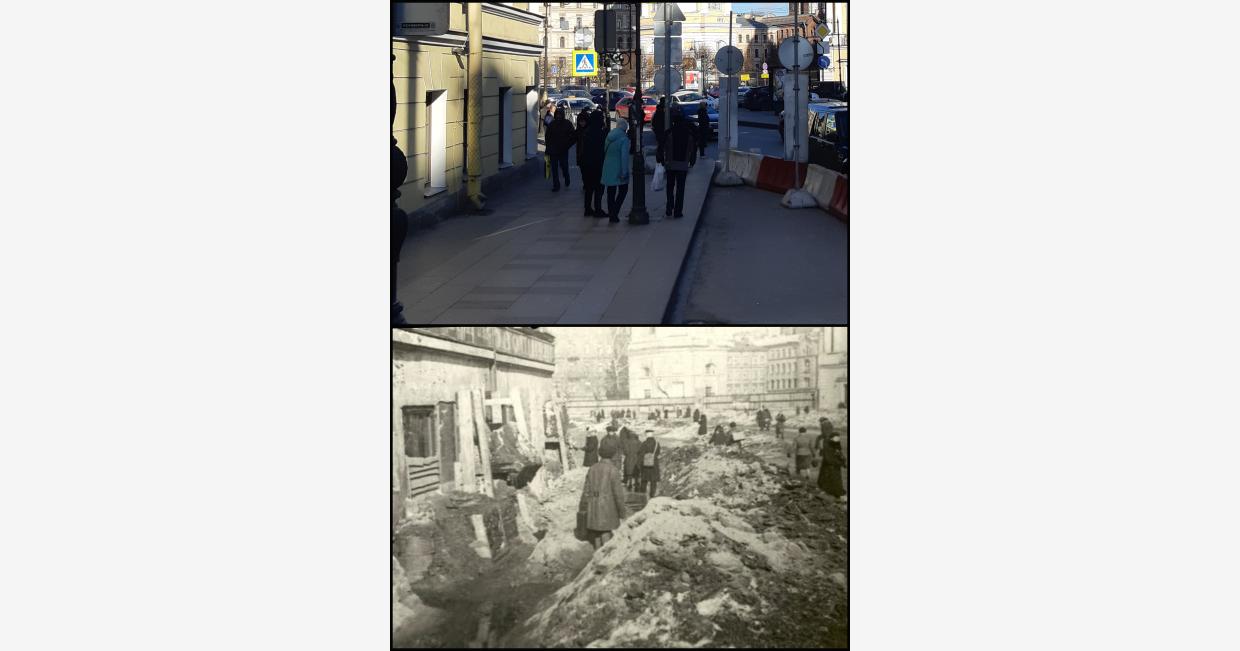 Leningrad residents braving through the snowdrifts by walking along narrow footpaths.

From the diary of Elena Mukhina (1924-1991). Soviet applied artist and designer. High school student at the start of the siege of Leningrad.

March is over. Today is the first day of the second month of spring. April has arrived.

Welcome, April, the month that comes before May, what do you have in store for me?

So far it's all the same. Bread rations haven't been increased. I got my dependent's card [Bread rationing cards in Leningrad were issued according to the category a person belonged to: industrial workers, office clerks, dependents and children. In February 1942 bread rations were increased to 300 grams of bread per day from the lowest point of 125 grams set in November 1941 - Alexander Shmidke] Yesterday evening Yakov Grigorievich came and told me to meet him at the 10th Line, house #25 at 11am, he will be there. I left home at half past nine. I decided to buy bread on the way back, but then I thought I would have to leave my cards there to exchange them [Lena was expecting to get employed soon which would have required from her to exchange her dependents' cards to workers' cards - A.S.] and that's why I bought my 300 grams on Leshtukov lane already. I had a knife with me and I immediately cut the bread in half, slicing one half into small pieces, and decided that one half would be for the road and I would not touch the other one until reaching home and then I would eat it with sunflower oil before going to work. But I ate the first piece even before reaching the Neva, because the bread was so soft and tasty it melted in my mouth and couldn't stay there for long. This way or another, when I was approaching the house #25 on the 10th Line, I only had 1/4 of my bread left.

Yakov Grigorievich forwarded me to the directorate to write a job application there. But when I came the office, I met their guy in charge and he told me no applications would be reviewed until the 8th. It turned out I walked all the way there in vain and the only silver lining of this long trek was that I knew where exactly to go next time. I barely managed to walk back. I came back home by 1pm, went to the zhakt [House-leasing cooperative partnership - A.S.] and told them I was totally unable to work that day. I came back and lied in bed right away. By 3pm Rozalia Pavlovna came and handed me a pass to the canteen on the corner of Zagorodny and Nakhimson square. It was Izabella Abramovna who gave it to her for me, cause she had an extra pass. I immediately went there and bumped into Izabella Abramovna, whom I thanked profusely. There was no porridge, only pea soup and blood sausage. I managed to take 2 portions of this sausage and one soup. Actually, they give only 1 soup and 1 main dish for 1 pass.

I've got a nice room, I especially love it for the reason the sky takes up the greatest part of the window, and this is very pleasant. I love my room, it's so fair and spacious. Oh, what a jolly live I'll live there! What a splendid display of nature I'm going to have on my window-sill. Fishes in aquariums, flowers in pots and birds in cages. Dear birdies, when will I finally get you? I will never pet cats or dogs, but specifically small animals and birdies, for the most part.