Now and Then - Neva Bridge near Kuzminki - 2 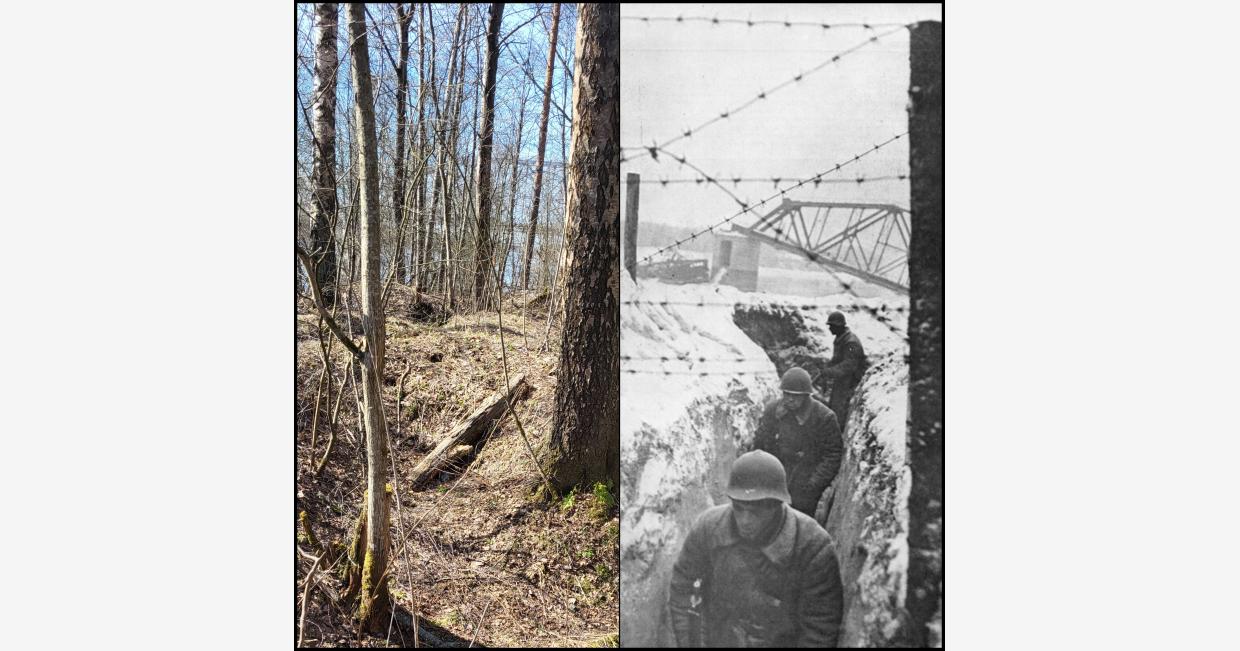 Red Army soldiers taking up positions in trenches along the Neva river next to the wrecked railroad bridge.

Another picture of this bridge from the German side can be seen here: https://histours.ru/news/now-and-then-neva-bridge-near-kuzminki

"We fell off our feet with exhaustion. Our position was easily observed from the left bank of the Neva and in daytime the Fascists opened mortar fire at any moving target. We weren't able to cook any food, just crawl across the communicating trench lines. Our dugouts were built with at least 3 layers of beams to protect us from mortar and artillery shells. There was no dedicated female dugout. We just expanded the Command Post dugout. We hung a cloak tent there, crafted bunk beds, covered them with fir branches and laid them over with cloth. The Master Sergeant brought us cotton padded trousers and vests along with winter hats. That day we didn't even realise we would have to wear all that for 3 months every day.

I recall that the phone connection died after some time, a wire got torn someplace. Having grabbed my wire spool and a field telephone, we went to inspect the line for the damage. It was dark. In order not to lose the "thread", we kept the wire in our hands. We fell through into bomb craters and holes again and again, connected our phone and tried to speak into the handset quietly, but distinctly:

A few days later "Viola" became "Rose", then "Lilac" then "Lily of the valley". Who was that odd person that came up with them, these callsigns, so wondrous at a frontline night when mortar shells fly over you, light flares spark up the sky, when you feel terrified and lonely. These were hard days and nights. I remember terrible fatigue and the desire to sleep, sleep, sleep. Then I got used to it day by day. Four hours on the radio or telephone, four hours of sleep, and then over again. At first we went to inspect the line in pairs, then we started going alone. My mate either went as a messenger to the divisional HQ, or stood guard at the ammunition dump.

The battery had to change its positions frequently. As soon as it opened fire at an enemy plane from the tall left bank of the Neva, it was immediately detected by enemy artillerymen. I remember an incident when an enemy shell exploded on the firing position of one of our crews. The ammunition which was amply stacked along the breastworks in order to open suppressing fire, blew up in flames. Our lads were wounded. We rushed to help them. We saved them all, dressed them and sent them to the hospital. The new crew was staffed with fire control machine operators while during air raids we had to operate the fire control.

The losses were significant. I still can't forget how we found unburied corpses of our soldiers, killed by bombings and shellings and frozen into the ground, when we crawled along the wire to repair it. I was especially struck by the young and very handsome Lieutenant, slightly powdered by the snow. He lay prone, spreading his arms wide. His open eyes gazed into the sky. The body was frozen into the ground so hard it couldn't be moved, and our lads covered him with lumps of rock-hard soil, putting fir branches on the top."