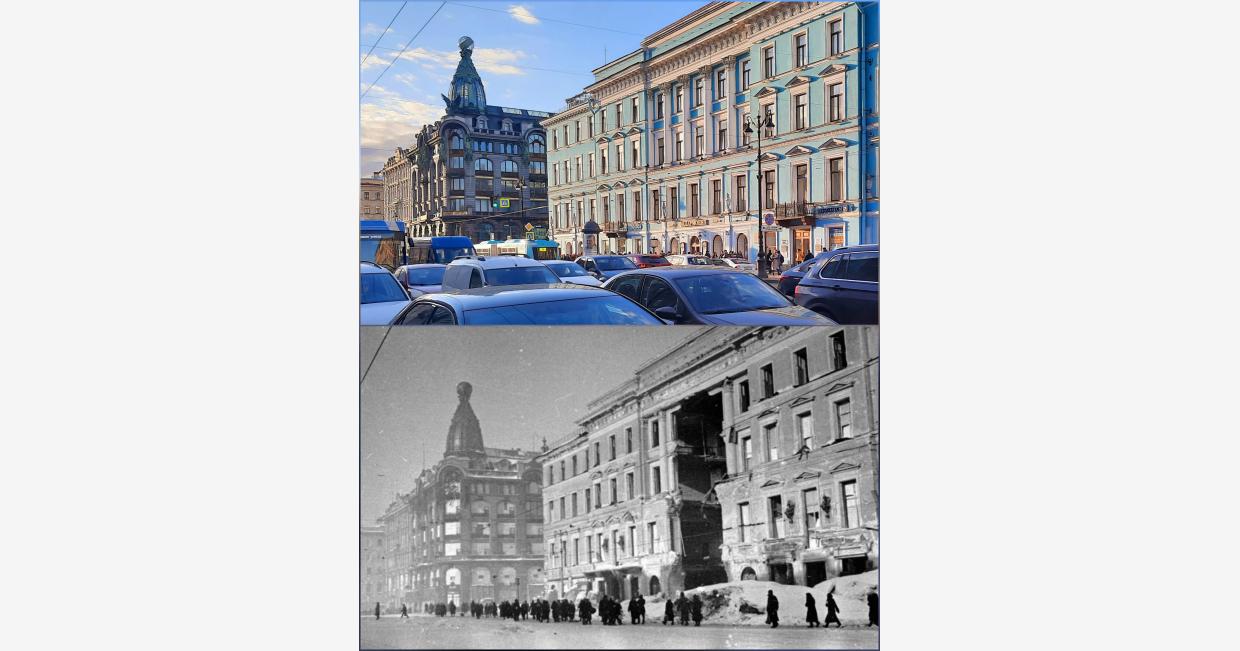 House #30 on the Nevsky prospekt, severely damaged by an air bomb in November 1941.

Electrical engineer. Senior master of the 3rd shop at the Stalin Metalworks Factory in Leningrad.

"Monday. Ever since my live got improved I started feeling the urge to write in my diary increasingly more rarely. This way I started cheating on the stalwart friend of my dark days. This isn't good, but it's a remarkable sign. We started gathering at home with Tanya more and more frequently. The food is decent, close to peacetime, and maybe even better. This restores my strength a lot. Tanya has put on weight noticeably, and I have simply revived: I don't feel exhaustion in my legs, I became very agile and unrecognisably energetic - this is the result of my gratitude to Tanya for her care for me.

I've been getting increasingly concerned with Gita's well-being [Gita Moiseyevna, his wife] for about a month already. I qualify my attitude to her in no other terms than "deplorable": I stopped sending her help while her letters are becoming more and more anxious. We've got it incomparably worse here, but they aren't doing so well either [in evacuation]. High prices, difficulty with procuring food - this is the motif of her last letters. How are they doing now? After I get my wage I'm definitely sending my Gitele some money. However hard they might have it there, she'll be able to purchase something for an extra 100 roubles. We don't have a lot of food here either, and once again, there are no prospects for the future to be seen while the month of March is approaching its middle. Is it true the siege won't be lifted until the end of March? Informbureau reports are so scant and unclear it's very difficult to judge about the situation at the front and us mortals can hardly see about the future tribulations that are already in store for us. I have only one wish, that Tanya would work at her old place and then we won't fear any siege.

On March 7 Fascist planes appeared over Leningrad for the first time in the entire winter and despite the fierce fire from AA guns, the air raid siren wasn't sounded. Right now it's useless, though. During this cruel winter several hundred times more people died than in the entire autumn - the period of heavy bombing of Leningrad. How we have to wait for our repulsive and merciless guests again, these 20th century barbarians, who assumed themselves to be the masters of the world. No, Fuhrer's dreams are doomed to fail, no matter how strong the German army might be, and they will be buried under the snow of the Great Russian Plain.

Now the artillery shelling of the city has just started again, senseless in its aftermath and barbaric in its objectives. They are shelling peaceful civilians, while military sites don't suffer at all. One can't help hating the Germans for this fact alone. I only wish one thing, that the war would end and with our victory exactly".