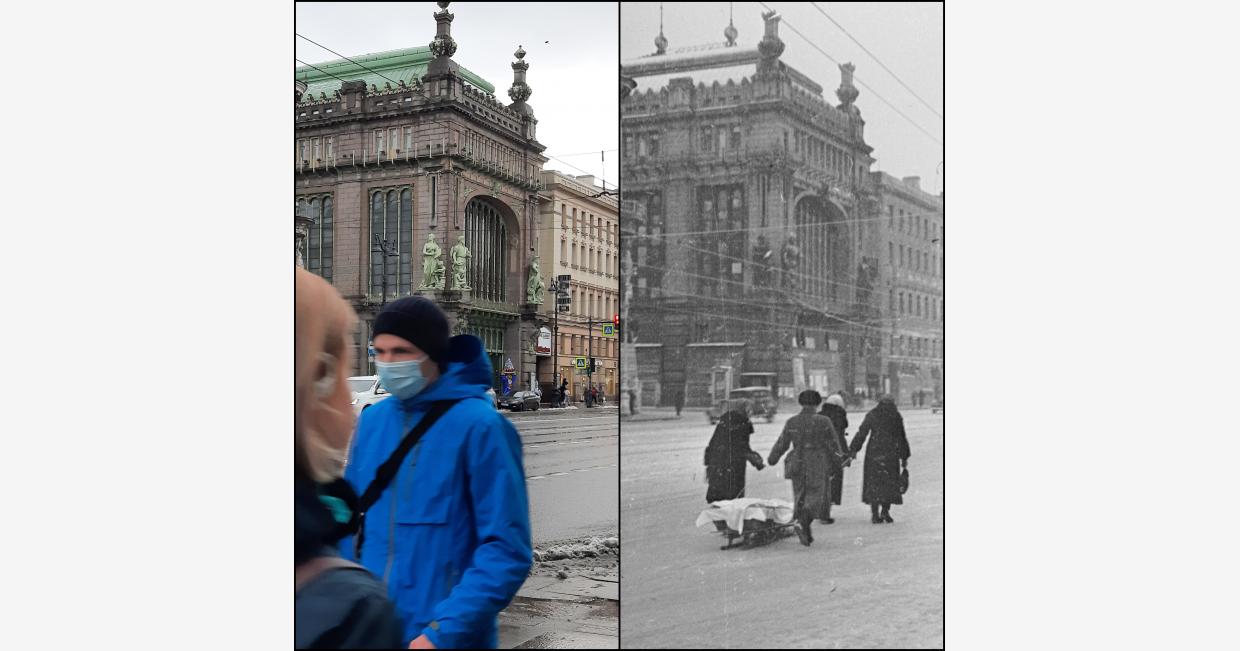 Food rationing norms were set in Leningrad to the absolute minimum in the entire duration of the siege: 250 grams of bread for industrial workers and 125 grams for white collar workers, children and dependents. The calorie value of the 125 gram slice was around 180-200 Kcal depending on the percentage of additives in the flour. Getting other types of products for rationing coupons became extremely hard, and starting from December - nearly impossible.

The movement along the Road of Life had practically ceased 2 weeks ago due to the increased ice thickness, and the day before the tugboat "Sealion" towed the last two barges to the western coast of the Ladoga lake. On November 20, 1941, a convoy of horse drawn sleds set off to Kobona from Kokkorevo across the Shlisselburg Bay along the freshly reconnoitered ice route. The next day it would bring 63 tons of flour - just 10% of the daily citywide consumption norm, or 12 grams per person for 1 day.

There were no air raids on this day and about 100 explosions of heavy artillery shells were registered. Air temperature had increased strongly in the last few days from -20 to -5/-1C.

Funeral procession towing a sled with the body of a victim of hunger on the Nevsky prospekt.

"The number of corpses lying in the streets is ever increasing, there's a corpse on Gardnerovsky lane that's been staying there for the third day, it's being torn apart by dogs already, on Orenburgskaya street there's one corpse after another - these are the sick who were unable to make it to the hospital. Workers get 250 grams of bread, clerks and dependents get 125. One can't get any food for rationing cards. People keep standing in queues in food stores day and night, although it's totally unbearable as the temperature dropped to -20 C.

Air raids are becoming increasingly more frequent and long. Today, while walking home from work, I and Suzik were caught by an air raid near Baburina street. Suzik got cold feet at the idea of walking during the air raid and jumped in a ditch, while I kept walking on. AA guns kept firing ceaselessly and the shrapnel from the shells kept falling like hail. But I was so tired I paid no attention to it. This air raid lasted for 7 hours. The next day Suzik told me he spent all this time in a cold ditch."

"I have finished my work at the Leningrad Komsomol Firefighting Regiment for good today. Yesterday I gave them back my uniform and received my working card today. I didn't eat at their canteen today. In the morning my mom bought stchi soup and mixed it with buckwheat and we had breakfast with this so-called soup. Then we drank tea. At about 12 we cooked rice and we'll have dinner with it too. We ate about 70 grams of bread each. I had to do quite a bit of running around in order to get my rationing cards. But I got them in the end and now I'm done with my platoon. Today I went to the district committee to get my registration terminated. I handed them my registration coupon and received the service termination certificate. Now I need to prepare some of the thing I will need at the trade school. I have a small suitcase, I think this is where I'll put my stuff. I'm not going to take a lot with me.

Today I was riding a tram and overheard a soldier say: "I look at 15-18 year old boys and they either stay silent or complain, but in 1918 we only had 100 grams of bread per day". It was bad in 1918, but now it's not good either. It's cold, and we're starving, and we're bombed daily. What were you before, Leningrad? There was joy and happiness in the streets. Few people had sad faces. One could get almost everything he wanted. There were shop signs "hot meat patties", "pastries, kvass, fruit", "confectionery" - you could just go in and take them if you had the money. It was pure joy of a street life. And what have you become, Leningrad? The people on the streets are sad and irritated. They can barely drag their feet. They are thin. Once you look at the ruined houses and broken windows, and your heart tears apart. When you read a shop sign, it makes you think: "This was before, but shall we ever see such life ever again?" Leningrad was a city of joy and happiness, and it became a city of sadness and sorrow. Previously everyone wanted to get into Leningrad, but few were given residency permits. Now everyone wants out of it, but it's not allowed. Does this spell anything good if a dependent person only gets 125 grams of bread per day, waiting for it to go down even lower every moment? One should add nighttime air raids and artillery shellings. Morale means a lot, and now it's gone low. Children are dying very often. These are the facts. And facts are stubborn things."

"Food rationing norms have been lowered to 125 grams. It's a little slice of bread, and it has to be cut in three parts: for breakfast, lunch and dinner. This is not easy!
... I endure hunger easily. I only want to eat when everything I was supposed to eat for lunch or dinner has already been eaten. I endure the cold worse, but only at home, while I have no time to think about it at school. While at home I sit on my bed under a heap of blankets almost all the time.

It's November, but it feels like fierce winter. Strong wind is blowing from the Neva river. It's unusually frosty for this time of the year. Everything's white around me. The snow is sparkling. And the sky look so blue. In the Alexander Garden the trees are covered with a shroud of frost. On moonlit nights the city is filled with a silvery light. Huge shadows of houses and trees seem black on the snow.

Mentally, we all understand that moonlit nights are scary: they make it easier for enemy bombers to aim. However, when you're walking down the streets you can't help feeling the beauty of the city."

"Our lights went out. Yesterday there were 3 air raid alerts in a row, and when the last one was sounded my mom didn't go to the bomb shelter. Father Dim arrived today. He brought some sorrel, tomorrow we'll have it. Today I got an "excellent" score at a music class. All at the time of the 5 hour long air raid. Grandma Olya is still making me learn German. Learning German is a most unpleasant thing! Thunder of gunfire has been rolling since morning. And in the evening aunt Nina started doing exercise #20 with me. It's a terribly difficult thing! I kept sweating trying hard to do it! My aunt got really frustrated in the end!"