Now and Then - Occupation of Krasnoye Selo 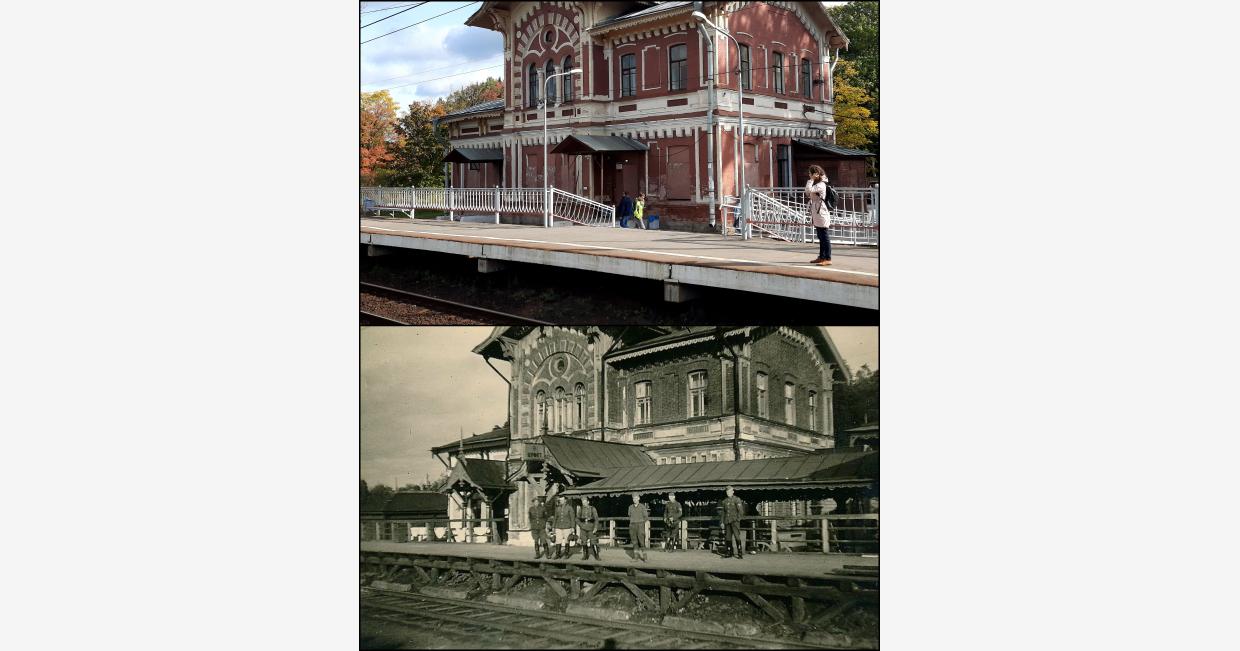 While doing my research on Krasnoye Selo, I found an article titled "In the concentration camp and under occupation", written by Yevgeny Balashov and Marina Tupitsina for "Novy Krasnosyol" newspaper. I decided to translate it and share it with you. The article is based on personal testimonies of Yevgeniya Novozhilova and archival documents.

Yevgeniya Pavlovna Novozhilova (or Znehya for short) was born in Duderhof in 1933. Her family lived on Orekhovaya street, house #11. On September 1, 1941 Zhenya was supposed to go start her first year in school but didn't start her classes because of the war.

"June 22nd was a very good sunny day. There were always lots of vacationers in Duderhof on weekends. One could rent anything he wanted for a vacation at a store on top of Orekhovaya hill, even a gramophone.

Sounds of music were spreading over the lake. And suddenly we learnt that the war began. People started rushing to the train station in haste. Dacha vacationers started packing up their belongings. On this day a sports competition had to take place in Duderhof military camps, but it was cancelled, and locals saw tanks driving out of one of the camps' gates.

In the summer of 1941 Yevgeniya's parents wanted to leave to the Yaroslavl province, but they didn't manage to. On September 9th there was heavy shooting and everybody took cover in the trenches. One little trench was dug next to her house. On September 10th the sky was lit by a stark glow of fires in the distance.

Brother Dima walked out of his house and heard German speech. German soldiers were already walking on the streets of the village.

On September 11th the staff employee of the village council Hilda Petrovna Maslova evacuated the village archive together with the groom who worked at the collective farm. Having reached Pushkin, they got to the first state bank office and handed the archive over. However, it was lost during the war.

The life under occupation was very difficult and hungry. The father butchered a pig to provide meat for the family just before the Germans' arrival, but they took it from him. The miraculously survived goat was a great aid. In spring, when the first grass appeared: goutweed, saltbush, stinging nettle, dandelions - children gathered it in sacks and brought home, where mother made flatbreads and stews from them.

The Germans opened a school in Duderhof on Promyshlennaya street in house #1. All children in the village were ordered to attend it. Those who skipped their classes were flogged. The children who played truant were sent subpoenas from the kommandant's office and collaborationist policemen delivered them. But the starving children could hardly sit through their classes and they ran away to search and beg for food."

Yevgeniya Pavlovna remembered that the children who entered the school building were undressed first. The Germans were afraid of typhus. The only classes at school were reading, writing and Bible studies. Children were flogged for every fault.  Yevgeniya Pavlovna remembered the teachers Olga Ivanovna and Alfred Yanovich, who had Estonian background. After the war they were both sentenced for collaboration with the Germans.
Finnish and Russian kids studied separately, they had different teachers. The Germans treated local Finns much more leniently than Russians. Finnish houses were neither razed nor plundered.

[These were Inkeri Finns who were resettled to the territory around the modern-day St. Petersburg by the Swedes who captured these lands from Russia in the 1610's. The Swedes wanted to gain a firm foothold on this territory and actively worked to replace local Orthodox Christian Russians and Karelians with more loyal Lutheran Finns. After Peter the Great's reconquest of this land the Finns stayed and continued living there in large numbers up until the war in 1941 - Alexander Shmidke]

The father of Yevgeniya Pavlovna, who was a railroad worker, died in October 1941. Her mother worked at a logging camp. All village residents who lived near the hill to the left side of the railroad going to Gatchina were resettled and their houses were levelled for security reasons.

Those who worked were fed with cabbage leaf and flour soup once a day. The cook was one of the locals, Mikhail Kolchin. Whenever people net him, they bowed to him and begged him to give them a piece of bread.

Many mothers made an effort not to let their kids outside whenever it wasn't necessary and feared for them. There were repressions. Seva Svirin was hanged on the corner of Sovetskaya street on a birch tree for stealing a loaf of bread. The birch stood there for a long time after the war until it was cut down.

Opposite Yevgeniya Pavlovna's house there was a small German cemetery. There was a German hospital in the village near Duderhof and the Germans buried their dead soldiers nearby.

All residents of the occupied territories were handed passports. These were blue cardboards which contained information on the name, the age, the time from which the person started living in this village/town, pre-war occupation, current occupation, information on one's dependents.

In the summer of 1943 the German kommandant's office in Krasnoye Selo issued subpoenas for all Russians as part of preparations for their deportation to the Baltic area and Germany. The regional elder Ivan Kaulin came and said the Germans were preparing to capture Leningrad and that the locals would be in the way of the offensive, and they had to be resettled for their own safety. The subpoena said where and when one had to turn up and which belongings one could take. People were allowed 24 hours to pack up. Only good quality belongings could be taken, as well as fuel. The subpoenas were signed by Count von Kleist-Retzov.

On September 26th, 1943 the family of Yevgenia Pavlovna came to Krasnoye Selo. They managed to take their goat with them as it was allowed by the decree. They were first taken to the town of Kreisengen in Lithuania in freight cars and then to the German town of Weiden. There they were accommodated in a camp. Adults were taken to work in the daytime and children, about 40 of them, stayed in the camp. Once a Polizei guard came and said: "Hey children, dress up pretty, we'll go to the circus". However, instead of the circus local bauers (farmers) arrived and started buying children for their households. Only 2 little girls remained unsold. No one wanted to take them as they were too weak - the bauers feared they might die on the way. Zhenya was one of these two girls. When the parents came back and didn't find their kids, they howled and wailed loudly. They managed to return three or four, but the rest vanished without a trace. Boris, Yevgenia Pavlovna's older brother, herded cattle for one of the bauers.

In Weiden all inmates of the labour camp were nearly sent to a gas chamber. Yevgeniya Pavlovna remembers how they were once taken to some place, where everyone was undressed: men, women and children. They were lined up in front of the gates, but for some reason the gate mechanism jammed. The whole crowd was driven back and ordered to put their clothes back on. They narrowly escaped death.

From Weiden Yevgenia Pavlovna's family was sent to Korice, located 30 km from the Czech border, where they were liberated by the Americans in May 1945. They offered the liberated Soviet people to emigrate to America or Canada. However, Zhenya's mother said: "Only Russia". All those who wanted to go back to the Motherland were sent to Prague to a quarantine camp. There the people passed the security check of the Soviet secret police: when and how they lived on occupied areas, what they did at the time...

The train with repatriates arrived to Pskov, and further on the repatriates had to get back to their homes by themselves. The Novozhilovs had papers which allowed them to return back to Leningrad where they lived before the war. Her mother managed to preserve some pre-war money throughout her ordeal and she paid for the passage in a freight car which took the family to a station in Leningrad.

Everything was devastated in Duderhof. Some people came back earlier and proceeded to rebuilding their houses by scavenging for whatever material was available from destroyed houses. Novozhilovs' house was already being pulled apart log by log and plank by plank. Had they come later, there would have been nothing left.

Yevgeniya Pavlovna said that shortly before their deportation to the Baltic area the Germans evicted them from their house and placed their field kitchens in their courtyard. All the apple trees were cut down.

They had to start their lives anew, repair the house and remove war debris from their land plot. All the land around Duderhof was stuffed with artillery shells and mines. Her mother went to work as a nurse in a children's TB hospital which was organised in the former Kartsova hospital, or the "stone school" as the locals called it.

Zhenya and the kids who came back from the evacuation or occupation went to school. The school opened in a wooden building on the Prospekt of the 25th of October in September 1944. There were only 2 classes there and 2 teachers. There were no desks, copybooks, it was cold and food was scarce. Only in 1946 the school was transferred to the 2 storey building on Teatralnaya street.