Now and Then - Operation Eisstoss, part 2 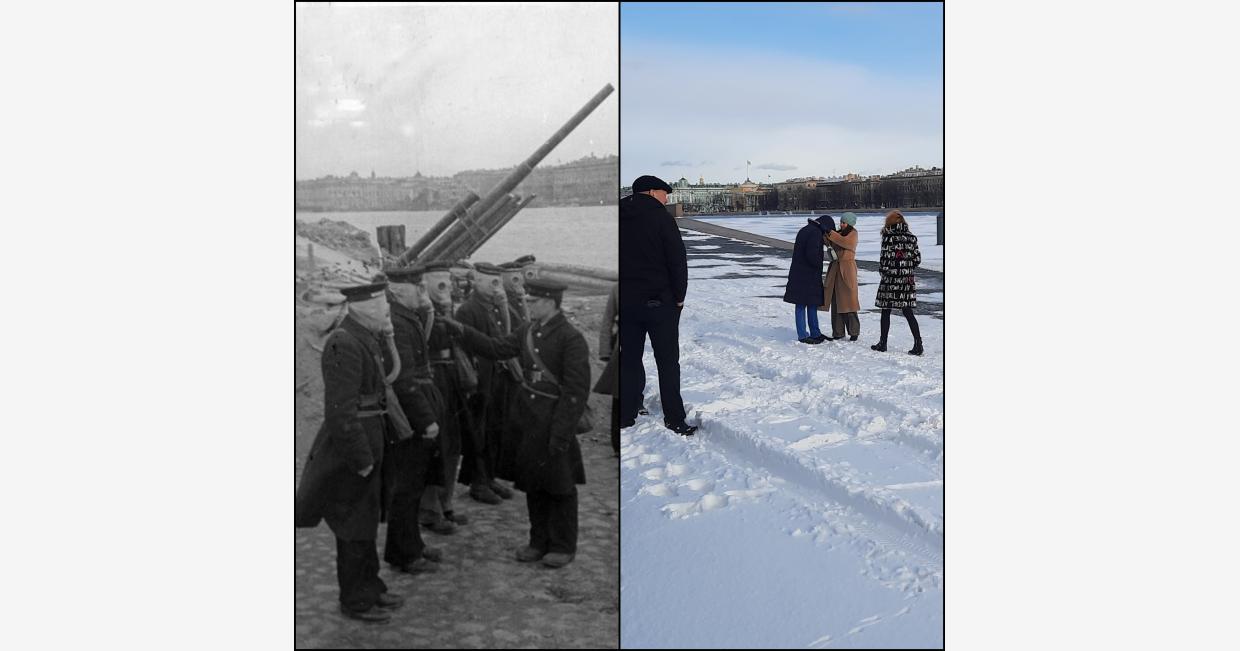 Red Army soldiers in front of their 76mm AA gun during a gas attack exercise.

From the diary of Trifonov Vladimir Ivanovich, born in 1925. Signalman on the icebreaker Suur Tool.

"I had stchi [Russian beef and cabbage soup - Alexander Shmidke] with onions for dinner. I went to do my laundry. I washed my uniform jumper, and when I was finishing the long johns, I heard gunfire. At first I didn't understand whether it was another shelling or it were our AA guns. Then I realised it was our flak fire. So very close. Then I heard automatic guns "talking", seemingly on Stoikiy. [Destroyer - A.S.] The gunfire is getting more intense. It seems like our ship joined the orchestra too. But why is there no air raid siren? I run to the berthing area and ask Panov: "Was there any air raid signal?" "Nope, haven't heard it" I get dressed quickly and run up to the main deck. The gunfire is terrifying! Stoykiy's 3-inch guns are totally deafening. I pulled down and tied my ushanka's earflaps. The sky is all speckled with flak bursts.

Now I see 4 Junkers approaching. The height is around 4000 meters. The fire is becoming even heavier. I have to keep my mouth open.

Popov fires the 1st gun. The gun mount's fastening bolts got loose. He wants to move over to his gun, but the crane stands in the way of the gun barrel. He goes to the 2nd gun. Suvorov is the gun layer. Koshel is the ammo server. No commands are being given. Chekhlov stands with the firing table in his hands and has no clue as to what to do with it. Our commissar, firing unit commander and First Mate stand on the bridge, continuously shifting their sights from the firing gun to the sky and back.

My iron sights are fitted on the 1st gun. I take them off and mount them on my gun. There's no one around it beside me. Popov fires HE shells. When he runs out of them, he starts firing AP's. Finally they organised the serving of shells from ammo racks... HE shells once again. Tons of casings all around the guns.

I look at the settings of the sights: it's 1-30. Who the hell adjusted them? I set it to 2-30. I'm positive all our shooting is totally pointless. We're shooting wildly without taking any aim. Airplanes arrive from different directions in groups of 3-4 machines in each and head for the city center. This is where Kirov and some kind of destroyers are moored near the Winter Palace. Suddenly I notice that several planes are diving on us from the stern side, which is opposite to us. I point Popov towards them. Well, it's not a nice feeling, I'd say... Well, they dive upon me one after another. Roaring wheezing of planes, whistle and thunder of falling bombs... Just to the right of us three bombs hit a shop of the Baltic Shipyard.

Now a massive lump separates from one dive bomber, whistles past us and flies towards Maxim Gorky [Kirov-class light armoured cruiser - A.S.] Airplanes just keep coming. They fly over us and then dive at the targets we cannot see and then escape from our firing sectors at low altitudes. The thundering doesn't stop for a second. Now one of the "divers" is lit up by an explosion - an artillery shell has just hit its belly, but it keeps flying. Now the left motor of another one is hit by the shell from Stoykiy's automatic gun. It bends to the side and vanishes behind the buildings. Stoyki's crew bursts in applause to the gunners. Soon the shooting goes silent. The sky looks like it's spotted by flies. It's the first time I see such air raid and such shooting. The 2nd gun is so overheated its barrel paint bubbled up and cracked. It fired 75 shells.

At the end of the raid I persuaded Manyshin to come over to me. I asked Bykov's permission to open fire but he didn't allow me as the raid was coming to a close. "Divers" didn't approach us from the stern side, although it would've been very convenient for me to shoot at them from that direction. The last two planes approached from the from the left side of the bow. I manage to take one shot at them before they left my sector of fire - the crane which the electricians forgot to turn back was in the way. Our DShKs [12,7mm machine guns - A.S.] also tried to join the action, but after firing about 10 shots each broke down as their ammunition rounds started bending and breaking.

An all hands on deck call was sounded on Stoikiy and the crew gathered at the aft. The destroyer's captain kissed the gun crew which shot down the plane, a "hurrah!" sounded and everybody was back to his post again. There was quite a bit of noise today alright, but the results were lacklustre. The Germans were more bark than bite too. If one considers there were about 25 planes that dived on us today, only 8 machines actually released their bombs, and there were just 1-2 bombs coming from each. The rest just dived for the sake of intimidating us or got too scared to stay in the zone of our wild fire and took evasive action. There were no fewer than a 100 planes in the raid. After the shooting with cleaned the guns with lye and went down to our compartment. Panov was already half dressed and prepared to climb up just in case. It's indeed not so nice to sit in the berthing area and listen to hellish fire and bomb explosions without having the slightest clue as to who is actually being bombed. I look at my watch - it's 8pm, and I somewhat thought it wasn't dinner time yet.

This raid demonstrated what kind of organisation we had: most of the crew crawled under the afterdeck, as if it could protect them from a bomb hit. Now everyone is guessing whether the Germans would fly back in the night or not? Will raids get more frequent or not? Everybody remembers the autumn raids well [Devastating air raids on the Baltic Fleet in Kronstadt on September 21-23 which prompted the relocation of capital ships and destroyers to the Neva river in city - A.S.] Now the Germans sent us their Easter greetings. In the evening I started my AA guard duty. The entire battery was ordered to go to bed without taking their clothes off.