Now and Then - Operation January Thunder 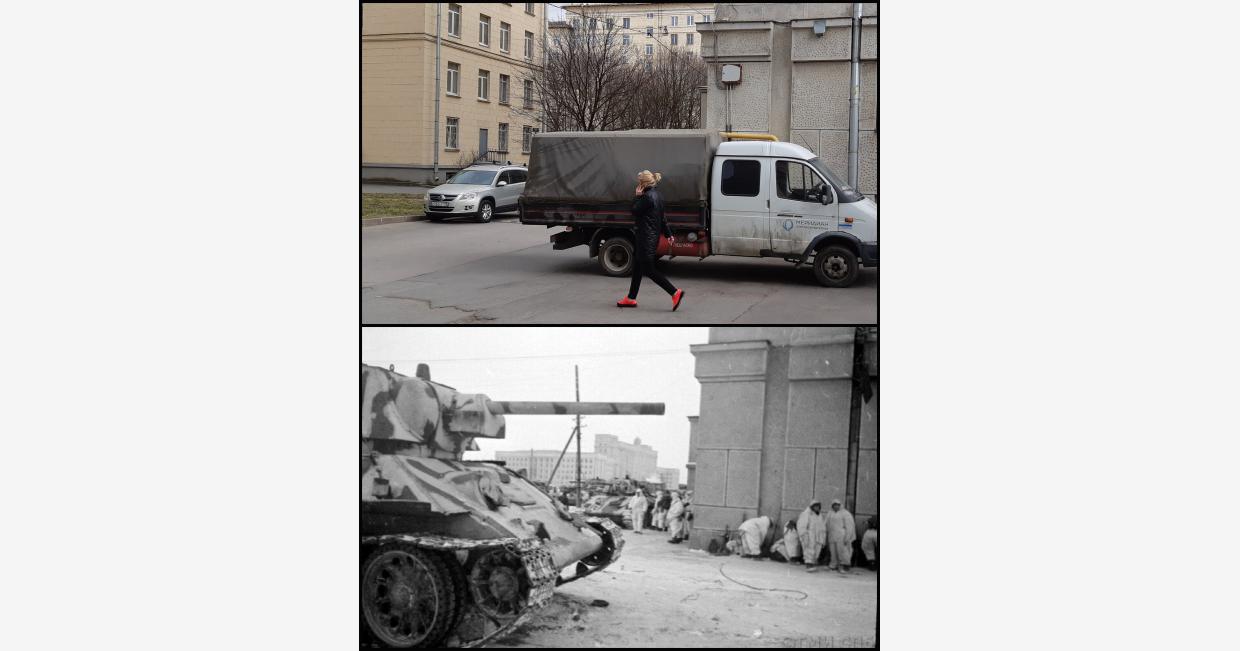 Red Army soldiers at a short break before marching south to the frontline towards the Pulkovo Heights. The House of Soviets can be seen in the background.

"Today's grey and damp morning seemed to be no different from yesterday's. Low brooding clouds and grey mist hung over the city. It was a disgusting January thaw, which covered pavements with puddles and loosened the blackened snowdrifts.

And suddenly at ten minutes to nine the city silence was literally exploded by the thunder of the gunfire we hadn't yet heard before. Buildings were shaking, glass shook with a loud clinking sound in window frames, and it seemed like the entire planet was shaking and vibrating. Crimson flashes of explosions covered the sky which was still dark at this point of time and gave it an ominous tint. The thunder of the artillery barrage was growing in its intensity. Fear and concern grew among the people who scattered into the street. I could hear shouts: "What does this all mean? Who's firing? Us or the Germans? Why are there no radio announcements?.."

In the first minutes the feeling of uncertainty overtook many people, as it seemed like it was the enemy firing his guns at us, full of resolve to storm the city decisively, and the people who got used to shellings started taking cover inside the nearest houses. But soon it became evident that the gunfire wasn't followed by shell explosions, which meant that it were our guns that were shooting!

This is how the just payback and long-awaited retribution for the deaths of hundreds thousand Leningraders, for our tortured and wounded city, began.

Joyous animation reigned in the Directorate - the employees walked around with happy faces and congratulated each other.

After lunch a meeting in the Smolny Palace was held, after which A. Kuznetsov congratulated the attendees on the start of the offensive of our troops on the Leningrad Front. He said: "Now it's time to properly prepare to rebuild not only the city itself, but its suburbs as well..." Someone asked him how the offensive was developing. Alexey Alexandrovich replied that despite the powerful artillery barrage the enemy was still offering stiff resistance on the main - Pulkovo - direction. Our troops have broken through the first line of their defenses, but throughout the years the Germans managed to build several lines of fortifications. How the situation will unfold will be seen in the next few days..."