Now and Then - Palace square 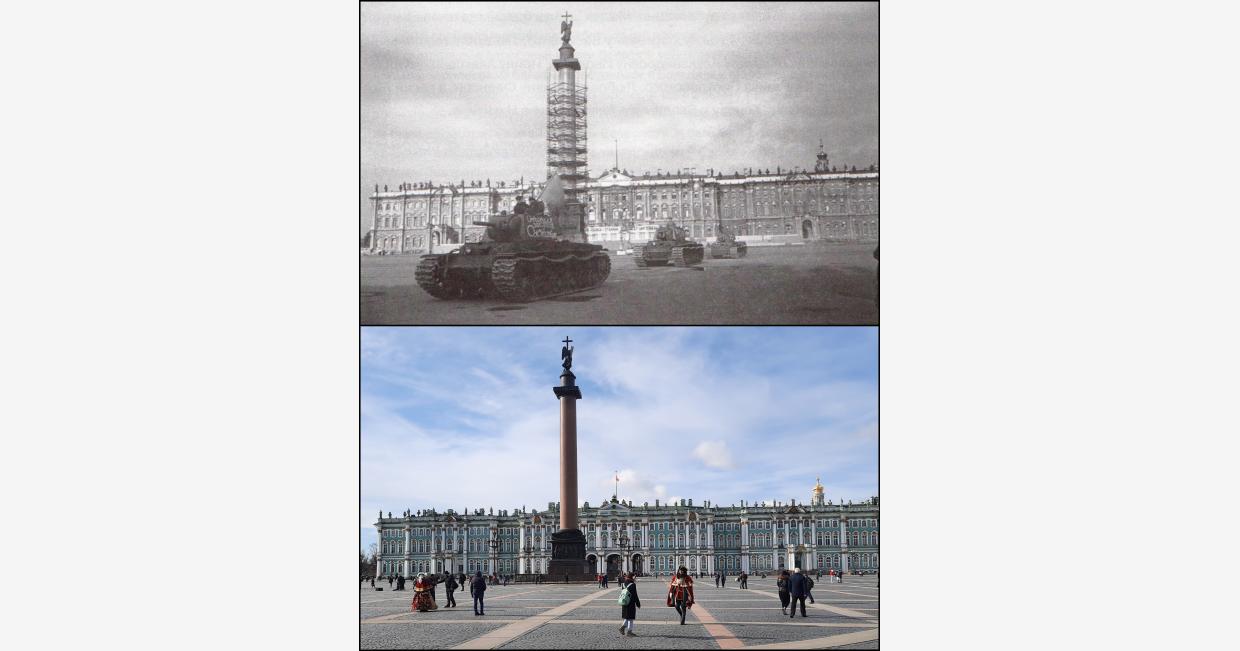 Column of KV-1 tanks carrying a red banner with the inscription "Let's defend the gains of October!" drives across Uritsky square.

"Today is the 24th anniversary of the October Revolution. Yesterday all our people listened, with bated breath, to the ever clear and wise speech of comrade Stalin. He provided an unparalleled analysis of events that happened in more than 4 months of the war. He outlined the tasks of the army and the people, conveyed to us his vigour and confidence in victory, despite the heavy territorial, material and human losses, urged us to exterminate the occupiers without mercy. They forced a war of extermination upon us. Well, they will get it...

We're living in a besieged city. The frontline goes across the city area. The city became the front. Shells are exploding on our streets. The enemy is within a cannon shot from us. What this distance means we know by the bursts of shells on the streets.

Artillery batteries are deployed on the outskirts. War entered our city. Boulevards and gardens are cris-crossed by air raid ditches. Shopwindows are protected with wooden shields.

Next to our house there are sand crates and water barrels. Posters on the streets urge: "Leningraders, learn to put out incendiary bombs". The golden dome of the St. Isaac's is painted over. The spire of the Admiralty doesn't shine any more. The mighty horseman is covered by a wooden cap. The horses on the Anichkov bridge have been removed. This is humane. We have always loved our city. We loved it like people like the air they breathe. This love is so natural we never noticed it like we never notice our heartbeat. But when one's heart is wounded you learn the depth of your love by the strength of this pain. Like a wound, a gaping hole is yawning on the beautiful building of the Kirov ballet theater. So many memorable evenings have been spent there by every Leningrader. Smashed by a shell, a roof hangs on the building of a school which Leningrad has presented to its children recently. The beautiful Palace of Young Pioneers which gathered thousands of young Leningraders under its vaulted walls. Blood reddens on the snow of streets, calling to revenge. Our love for our city is consecrated by this blood now.

Our life, our happiness are melded with the city from now on. It is our flesh, we are its Soul, we studied at its schools. We worked at its factories. We had our time of joy in its parks. We whispered our words of love on its embankments during White Nights...

This cold November night, the silence and calmness of which can be exploded every minute by an air raid siren, a shell burst, the night, full of military wariness and strenuous labour. For the first time in 24 years we won't come out to the Uritsky square and won't carry our banners along the revelling streets. The stern clarity of the holiday won't belittle its greatness.

We promised no to stain the honour of Leningrad, we won't besmirch it with weakness.

If it gets cold, we'll endure.

If we get hungry, we'll tighten our belts.

If it gets difficult, we'll stay strong.

We'll persevere, we shall win."