Now and Then - Pavlovsk Marketplace 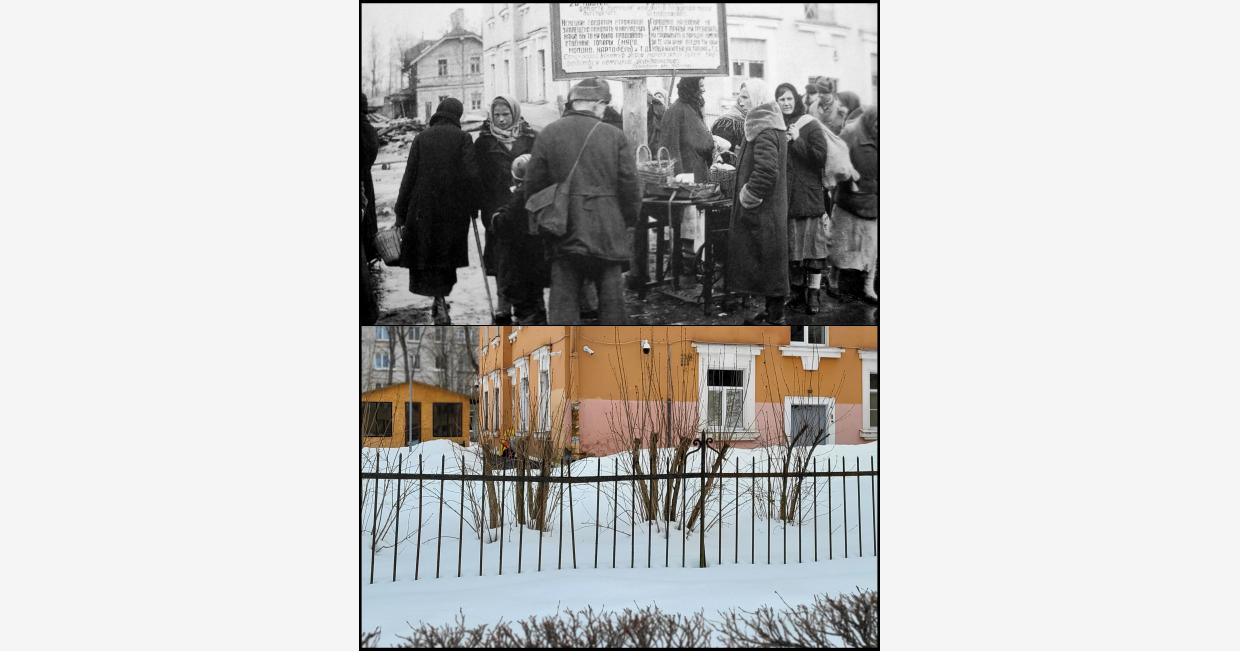 Trade at the Pavlovsk town marketplace. The plaque reads: "German soldiers are strictly forbidden to buy any kind of foodstuffs from the population (meat, milk, potatoes), etc. The townsfolk has no right to ask [German soldiers] for either bread or tobacco, etc. or accept it as barter in exchange for household items, etc. This will be monitored and enforced by the German gendarmerie in the strictest way possible. Commandant of Pavlovsk".

From the article "Pavlovsk in the years of the occupation" by V. Tsypin:

"The Germans weren't concerned by the food supply of the population and because of this the locals were in a constant pursuit of food. Many people left Pavlovsk in order to find it in nearby villages. On the other hand, the residents of Pushkin tried to get into Pavlovsk to exchange things for food as their supply situation was even worse. Such "vagrancy" was strictly punished. It is known that in December 1941 the Germans shot 38 Pushkin residents who went to the Pavlovsk marketplace. By the winter of 1941-1942 mass starvation began. Water pipelines didn't function and city residents went to the river Slavyanka to fetch water. Firewood was in short supply. Dead bodies were buried in a ravine by the cemetery, but they could often be seen scattered across the streets. The plight of Pavlovsk and Pushkin residents was no better than the life in besieged Leningrad. While tiny amounts of food were still distributed in Leningrad for rationing coupons, no one cared about the population on occupied territories. There were food stores in the town, but people had no money as they couldn't find any jobs. Finding employment was extremely difficult and normally required giving a bribe. Those who succeeded at getting a job received a small ration which allowed one to pull through, even if by the skin of one's teeth. Some managed to get temporary employment at repair works, sorting potatoes or laundering soldiers' clothes.

Most of the population subsisted on the food they could exchange for barterable things at the market, or on leftover vegetables they could find on the fields after the harvest. Normally they had to be dug from under the snow. People exchanged their personal possessions for cabbage leaves, potato peels and sunflower press cake. There were testimonies confirming the sale of human flesh on the marketplace. Once Pavlovsk residents saw a man hanged on a pole near the marketplace, who had a poster saying "Cannibal" hanging on his chest. It was also the place where the commandant carried out show punishments and even flogging. Quite often vendors were beaten for wrapping food in Soviet propaganda leaflets and their goods were confiscated. For example, a local woman named A. Mitenkova was shot for wrapping berries in such leaflets. After the liberation of the town the priest Travkin testified there was a gallows next to the fire station. He saw a chimney sweeper, whose name he didn't remember, being hanged on it, and the music teacher P.P. Razumov along with his wife."

From "Combat and Genocide on the Eastern Front: The German Infantry's War, 1941–1944 (Cambridge Military Histories)" by Jeff Rutherford:

"Conditions within Pavlovsk fit into this general picture of famine and misery in occupied northwest Russia. They also highlight the logistical problems that afflicted the Wehrmacht in late 1941. Though the 121st ID’s supply system functioned reasonably well during the drive on Pavlovsk, once the advance stopped, the supply of cattle dried up and the men were forced to rely on deliveries from the army’s butcher station in Krasnogvardeisk or on their own foraging. In response to the latter, XXVIII Corps declared that the following actions all contributed to an increasing bitterness of the civilian population towards the Wehrmacht: the forceful requisitioning of cattle without compensation, especially when children were present; the taking of a farmer’s last grain or cow without payment; and rummaging through a house and confiscating items used daily by the inhabitants. It then ordered an outright ban on “wild requisitions.”

Though “wild requisitions” were theoretically banned, the organized plunder of Pavlovsk received official sanction. Soon after their arrival in the town, German authorities confiscated all food stocks in warehouses and markets as well as those held in individuals’ homes. According to the Soviet Extraordinary Commission, this “created a situation of incredible hunger in the city, the result of which caused the intentional death of the population.” Over 6,000 inhabitants of the town died due to starvation and the various diseases that accompany hunger. In the most tragic case of organized starvation, 387 children between the ages of three and thirteen died during the winter of 1941–2 while staying in an orphanage established by the Germans. According to witnesses, the death of ten to fifteen children on a single day due to hunger occurred more than once."