Now and Then - Poster on the Nevsky 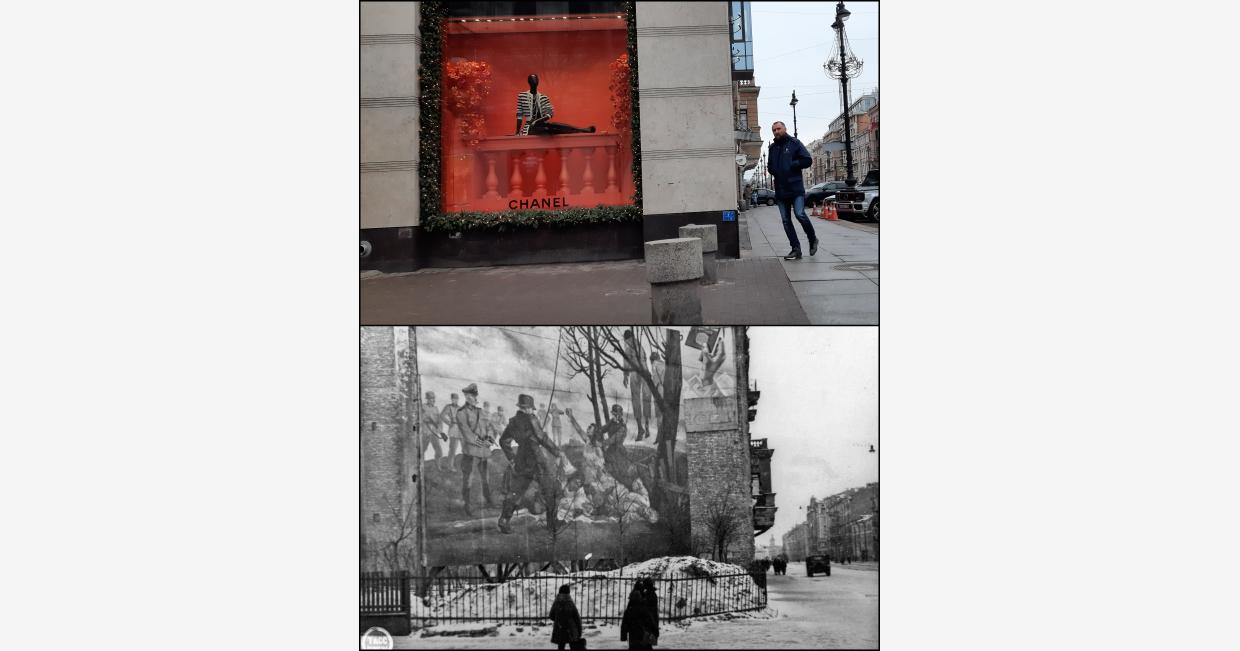 Residents of Leningrad looking at a huge propaganda poster on the wall of a building on the main street of the city.

From the diary of Georgy Knyazev, historian, director of the archive of USSR Academy of Science.

"Yesterday I couldn't stay under the portico of our apartment building upon my arrival home: shells were bursting somewhere beyond the Neva; today they thundered somewhere further at the same time of the day. I walked among the columns. There are fewer pedestrians here for some reason. Many people are looking for evacuation centers and get nervous cause they can't find any; others ask the whereabouts of Social Security departments - the disabled ones. Others can barely walk due to exhaustion or old age. This departure of humanity is gruelling to observe. The snow-laden quay still has driving paths cleared though it. Vehicles drive along rarely there: some occasional trucks and very rarely one can see passenger cars: probably, special purpose cars or ambulances.

While I'm driving or standing at the columns I always see the sight which has become very mundane recently: people towing empty coffins, its planks hastily nailed together and painted, or the ones with dead people in them, and two or three people towing "funeral sleds". It is said piles of such coffins get built up on the city's cemeteries.
Joyous tidings about the new blow struck at the enemy are arriving from Moscow. Hitler himself has declared he was going to postpone the capture of Moscow until spring. Our winter didn't suit to the Germans' taste. Ah, if only they all froze to death around Moscow, Leningrad, Ukraine, their supply lines thwarted by snowdrifts. I wish these damned bandits who invaded our land, who bombard streets, squares, residential houses of Leningrad perished one and forever. What if the final defeat of German armies has begun at last? I wish their machinery broke down on our snowy expanses! Then these bandits would suffer our retribution for their terrible crimes.

They will not escape retribution. I brought home one of the most effectual posters which were glued to the walls of buildings in the autumn. A tormented mother carries her murdered child, and it's signed: "Revenge!" Millions of devastated, tortured, suffering people are crying for revenge, for retribution. And it will be done! These bandits will never be our overlords, new Oryol or Tula landed gentry-conquerors!

Roosevelt declared: "We have to admit we're facing a long war against cunning and strong bandits". He recognised the United States suffered a great setback on the Hawaii islands and probably lost their outposts in the Pacific: Guam, Midway, Wake: "Hard work awaits us in the future, hard work day and night, every hour and every minute".