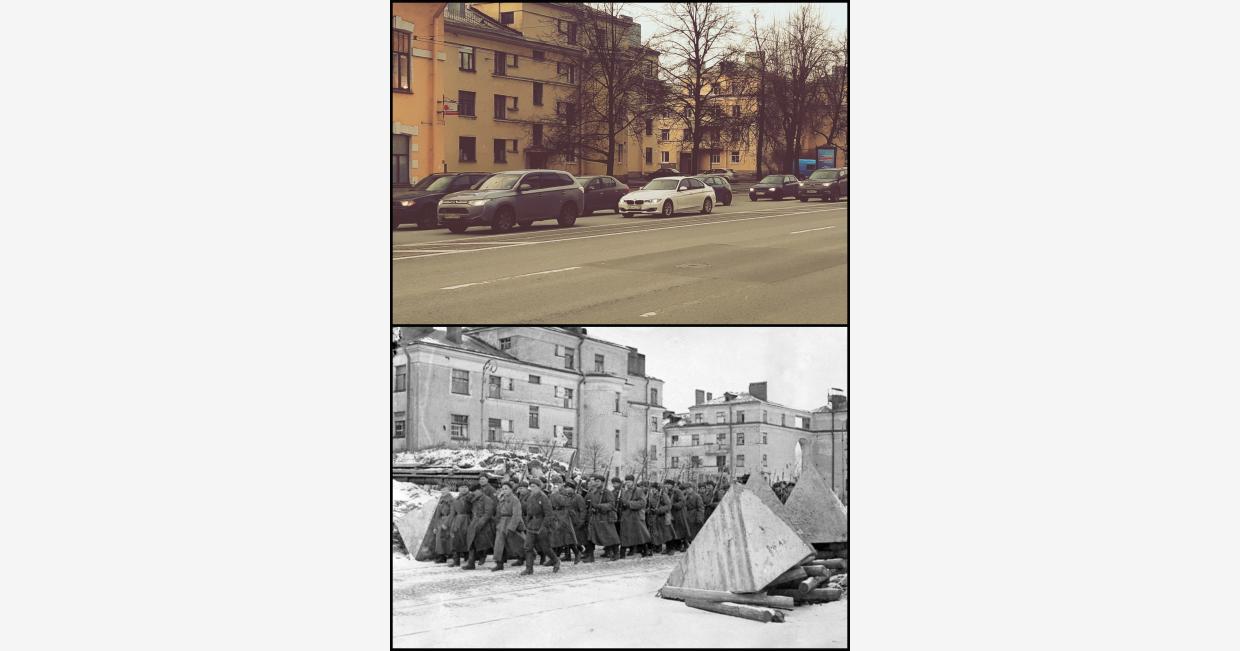 Soldiers marching along one of the main thoroughfares leading to the southwest of the city. Most likely they belong to the 30th Guards Rifle Corps which assaulted heavily entrenched and fortified German positions in this sector.

"The cannonade has been going on since yesterday, it grew stronger by the evening and could be heard throughout the whole night, and in the morning its rumble got so intense the windows were ringing in their frames. It's our guns that are firing, and everybody's thinking our offensive has begun. The cannonade is ceaseless, one can't hear separate salvoes but overwhelming din and thunder. Occasionally an especially big or closely located gun strikes like a battering ram against the wall. When it bangs, it seems to me like all window pane are about to shatter. And I want to pray, and I pray for all those dying here now, somewhere very close by, for us all, for Russia.

I wish all churches held services for the fallen warriors: "Save, o Lord, the people of Yours". And it's strange to me that there's life going on the streets as usual, that people go to cinemas, Belyakov said over the phone he had puppet shows every day, Anna Iv. and her friend went to watch the "Front" in our cinema. It all seems strange to me. People are falling by the hundreds, by the thousands every minute, every second...

In the morning a short, affable telegram delivery girl said: "Can you believe this - I'm working now, I'm healthy, and the doctors have just put me back on my feet, cause I was about to die. My mother died in that terrible winter, I lost my four months old daughter, she died on my own hands. I wanted to give my child a proper burial, but how could I save so much bread for the coffin and for the grave*. So I carried her to the morgue - imagine what it was like for me to go back home. I didn't manage to make it, I fainted on the street. They took me to the Erisman hospital. They worked so hard to save me, I'll never forget it.

They made me some kind of transfusions, treated me with their medical procedures for so long, and now I'm healthy again. Now I only live by the hope my husband will survive. He's on our front so far, still alive".

At about 6 or 7pm the cannonade stopped, and I suddenly felt how tired I grew today because of this terrible thunder. What future awaits us? Now they have got this idea to restore the names of streets**, having noticed for the first time in 26 years that the former names are "closely connected to the history and specific features of the city". Huh? Il faut avoir du toupet.

I got so angry tears appeared in my eyes. Where have they been all this time?

I wrote Natasha about this sensation and told her that I believed Sonya and Petrusha will soon live in Gusev lane."

* - in the winter of 1941 the ground became frozen solid and digging an individual grave became extremely difficult. Grave diggers charged a loaf of bread for their work - the only hard currency in Leningrad at the time.
** - on January 13, 1944 the Leningrad City Party and Executive Committees decreed to return historical names to several main avenues renamed after the Revolution. Prospekt of the 25th of October became the Nevsky prospekt, etc.