Now and Then - Pskov under occupation 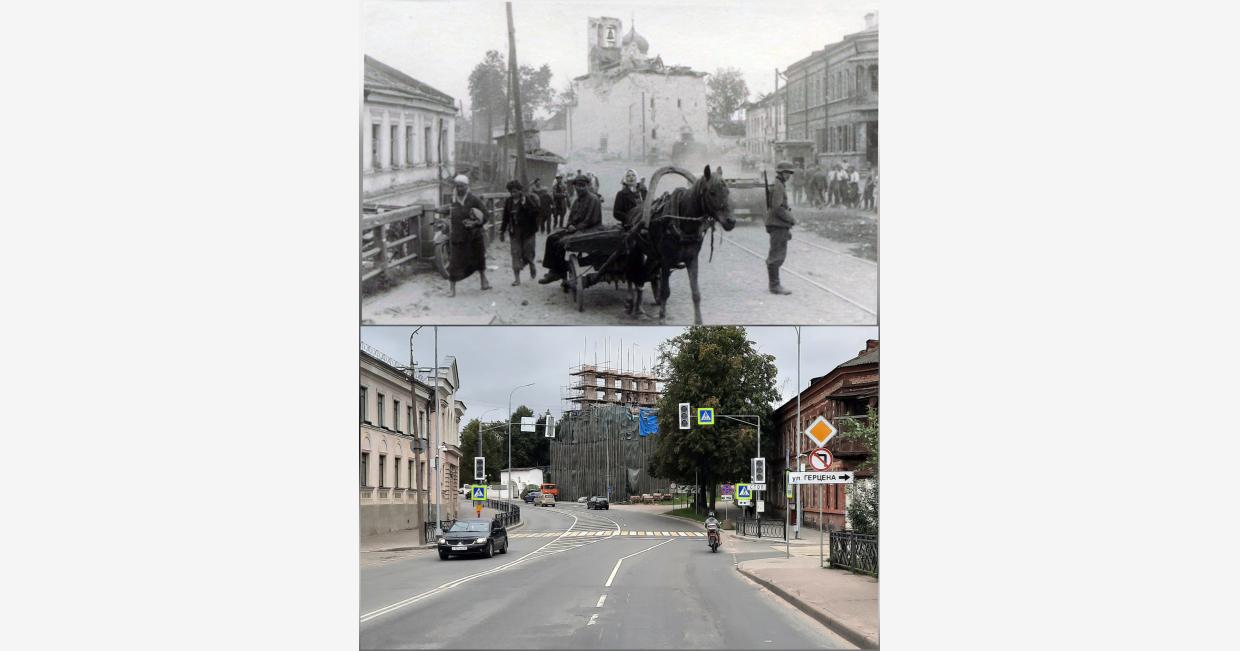 Local residents pass by a German sentry towards the Troitsky bridge. The Church of Saints Cosmas and Damian can be seen in the background.

From the report of the director of the State Archive of the Pskov Province Natalia Isakova, presented in the article of Alexey Semyonov on the losses caused by the occupation to the Pskov region:

"Everyone who was left alive by the Fascists had to work on the occupiers, and for this purpose people were issued special passports. Special laws regulating all spheres of life were announced, curfew was introduced and a whole system of penalties and punishments was developed. First of all, everything was meticulously inventorised and accounted for: starting from people and cattle and ending with skis, bicycles and the last handful of grain in village granaries. Regular peaceful life in Pskov was paralysed - one couldn't travel long distances, turn on the light in one's house or trade at marketplaces while the prices were sky high. A liter of milk cost 30-40 roubles, a box of matches - 50 roubles, while the salary of a highly skilled worker was about 300-500 roubles.

The archive possesses a huge file with administrative punishments for violating prohibitions. For example: one person entered Pskov without permission and got fined for 200 roubles. Walking along the streets in forbidden time was also punished, just like failing to report to the police on an overnight stay of a person who didn't belong to the household. Documents were copied with carbon paper: one copy was issued to the person, another one stayed in the occupation administration office. Here's another example: one person used electricity without the power station's permission and got fined for 300 roubles. Another man traded at the marketplace on a forbidden day, buying and selling horses, and arrived to Pskov without permission. His fine was 10 000 roubles - a tremendous amount of money at the time. Here's the kommandant's order for the Lyady region: all people from 16 to 60 had to pay and annual 100 rouble tax. A tax on dogs was imposed. Refugees sent to settle in certain villages had to be immediately assigned personal numbers and listed in a registry roster, while their passports had to be withdrawn. It was prescribed to surrender heavy sleds and skis to the occupation authorities.

The occupiers robbed the locals of all their stocks of grain, vegetables and "Pskovian gold" - the nickname of flax in the region. Before the war nearly every family raised flax, using it to press linseed oil and weave linen fabric. However, the German authorities banned their production, condemning many families to starvation.

The archive possesses a decree on the harvesting of flax, and it must be mentioned the Germans not only confiscated harvested stocks from the locals, but the also the seed allocated for the next year, as well as grain, potatoes, etc. Here's another decree: "We announce for the last time that individual pressing of linseed oil is strictly prohibited. Peasants who own flax crops are only allowed to keep no more than 50 kilograms of harvested flax." This means the occupiers literally robbed them blind."