Now and Then - ROA march in Pskov 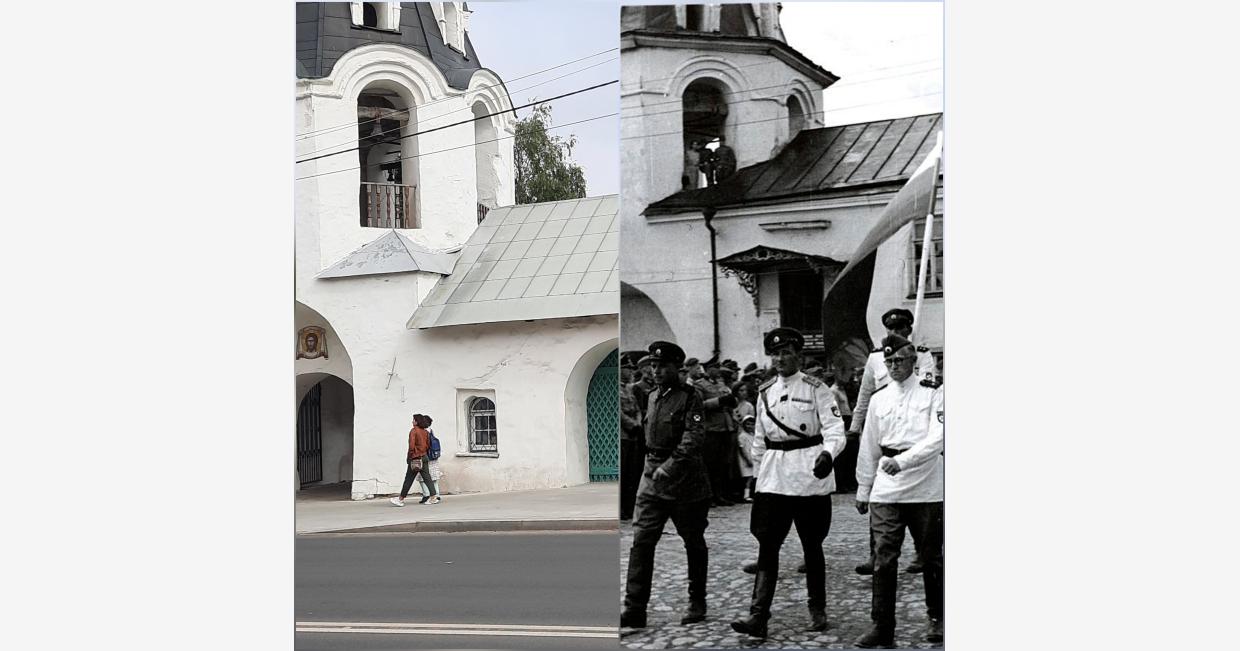 Parade march of the Guards Shock brigade of the Russian Liberation Army in Pskov.

In April 1943 the Abwehr decided to create a military unit consisting mainly of Russian defectors, White emigres and collaborationists in order to serve as rear area guards and saboteurs on the occupied area around Pskov in Northwestern Russia. By the middle of May the first and only battalion of ROA Guards brigade was formed and on the second anniversary of Hitler's invasion in the USSR, presented by the Germans as the "Day of Liberation", the brigade was allowed to have a marching parade in the center of Pskov.

In spite of all the funds invested in the project and propaganda efforts, this undertaking of German special services ended in a complete fiasco. Right after the march there was an attempt at a mutiny in the battalion which led to several casualties. The brigade spent the rest of the summer without any action, having not entered combat with the partisans even once, what undermined the unit's morale even further. In the end of September, when the brigade was split into small squads and scattered around German garrisons, many soldiers realised the Germans saw them not as a core of the future independent Russian army but merely auxiliary guards. Affected by the news of German defeats and partisan propaganda, around 150 men defected to the partisans in November 1943, which caused the Germans to close the project completely. The remaining "guardsmen" were disarmed and sent to a war camp as a reserve unit, while a small group of soldiers was transferred to the Western Front.

"In a few days before the 22nd of June 1943 Colonel K.G. Kromiadi announced on the local radio there would be a ROA parade and on the same day the march of the ROA was aired for the first time: "We are walking across broad fields..."

The battalion had no banner of its own and used a big tricolour silk Russian flag instead. The Germans who normally didn't object to the use of national flags by foreign military units were somehow against the use of the Russian tricolour flag. ROA emblems had a St. Andrew's cross emblazoned on them instead of the white-blue-red flag. Local German authorities appeared to be more lenient and approved of the use of the white-blue-red flag at the front of the marching procession...

... June 22nd was Tuesday - a work day, but quite a few Pskovians gathered on the streets. On that day I gathered the kids who attended Pskov Orthodox Mission classes in advance, arranged them along the route of the parade and ordered them to meet the Russian flag with applause, which was to be carried at the head of the column by the standard-bearer G.P. Lamsdorf (a Russian emigre) with two assistant submachine gunners. It must be noted that many people who came to see the parade also applauded. There were speeches, there were banners with slogans, and all went well. However, in the night there was a Soviet air raid which caused damage and casualties.

The second trouble came the same or the next day. Soviet agents, led by one submachine gunners, who served as the standard bearer's assistant, organised a mutiny in the Guards battalion. There were casualties on both sides, but the mutiny failed as most of the Vlasovites appeared to be principled enemies of Bolshevism. [General Vlasov surrendered to the Germans in June 1942 in the area north of Novgorod and agreed to collaborate with them as the head of the "Russian Liberation Army". Hitler never trusted him completely and only agreed to deploy them on the battlefield in spring 1945 when they produced virtually no effect on the fighting. In May 1945 Vlasov and the leadership of the ROA were captured by the Red Army and hanged in 1946 after after a closed court trial - Alexander Shmidke] I was informed about the incident by the Senior Lieutenant L.A. Samutin, a member of the NTS who was considered to be the main propagandist of the battalion." [National Alliance of Russian Solidarists - a radical organisation of Russian White emigres which promoted the ideas of anti-Communism and Corporativism/Solidarism. During WW2 it actively cooperated with Nazi secret services and after the war it was sponsored and assisted by the CIA and MI6. NTS was officially registered in Russia in 1996 - Alexander Shmidke]

The man in the center of the top photo is Colonel Igor Konstantinovich Sakharov (1912-1977). The son of a White Army general, he managed to acquire combat experience in Chile, Argentina, China and Spain. Starting from 1942 he served as a collaborationist military unit trainer and organiser, and participated in the organisation of the ROA. In 1943-1945 he served as the aide-de-camp of the notorious General Vlasov. After the end of the war he escaped being handed over to the Soviets by the Allies and attempted to coordinate the work of Russian anti-Soviet organisations in West Germany. In mid-1950's he left for Australia where he died in a car accident in 1977. According to some unconfirmed versions the accident could have been arranged by the KGB. The banner-bearer at the back of the photo is Count Grigory Lamsdorf (1913-2004), who was born in a noble Russian emigre family. He took part in the Civil War in Spain, fighting on Franco's side with distinction. In 1939 he moved to France where he was immediately drafted in the army when WW2 began. He received a Croix de Guerre in May 1940 for gallantry in combat against German paratroopers, barely managing to escape German captivity by fleeing to Vichy France. At the start of Operation Barbarossa he enlisted as a volunteer in the Wehrmacht, serving as a Russian-German interpreter and taking part in the formation of collaborationist units. After the war he emigrated to France where he spent the rest of his life running a hotel chain.