Now and Then - Samoilova mansion 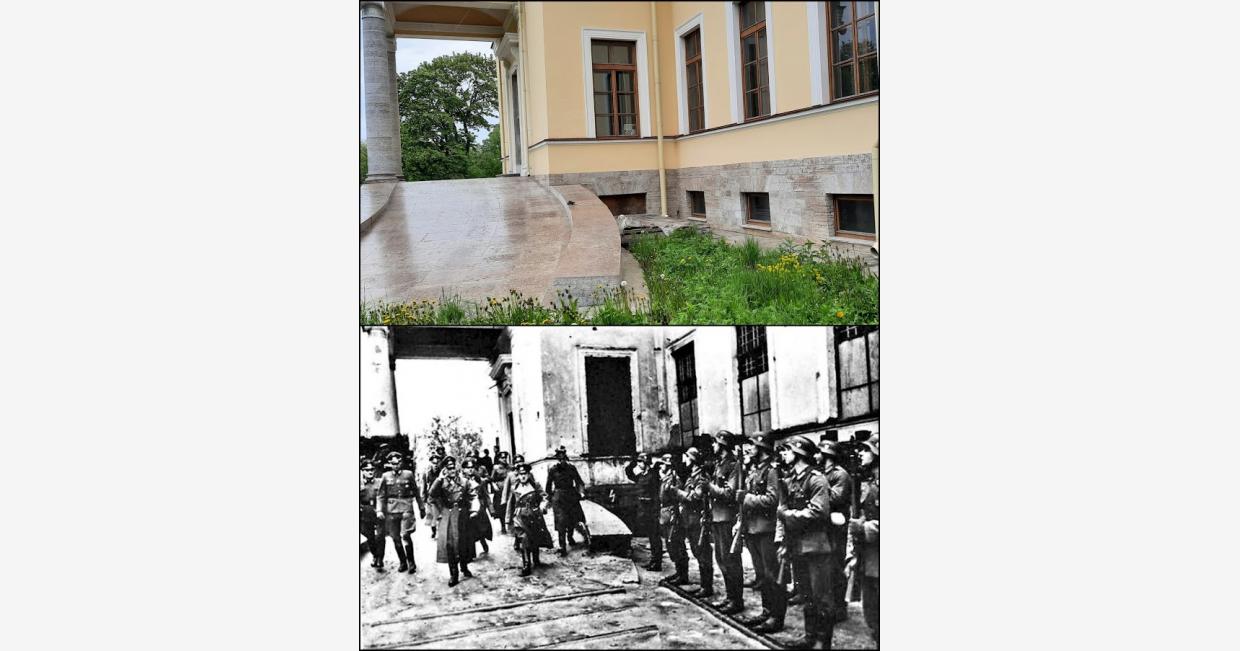 Honour guard in front of the entrance to the mansion of Yulia Samoilova, headquarters of the 250th Infantry Division (Spanish Blue Division).

I translated the following text from a local area history page. If you find any inaccuracies in their translation of General Infantes' memoirs, please let me know. I didn't translate everything to the letter either, so something might have been lost in the translation.

When the commanders of the Blue Division decided to celebrate the 7th anniversary of the "Spanish War of Liberation", a solemn ceremony was scheduled to take place in the divisional headquarters located inside the aristorcratic mansion of Countess Samoilova on July 18th, 1943 at 6pm. Its Great Hall painted with the scenes of Maltese Knights' campaigns seemed to be very fitting for this purpose.

At this event military decorations from Francisco Franco were to be presented to the top officers of Army Group North, including the commander of the 18th Army General Lindemann, General Kluffel and all their staff members, as well as to a number of Spanish officers and soldiers. As General Infantes, the commander of the Blue Division at the time, wrote in his memoirs, "Russian spies scoured all around this area".

The intelligence service of the Leningrad Front was indeed aware of these preparations, and the Chief of Artillery of the Front General Odintsov was ordered to present a special Red Army gift for this "noble assembly". The artillery of the 42nd and 55th army was tasked with opening precise and rapid fire at the mansion with 152mm guns for the duration of 40 minutes in 3 waves with the aid of artillery observers hidden in the area.

How the shelling took place is described in a passage from General Infantes' memoirs: "I opened the event with a short speech and presented the generals the awards the Caudilho sent us. After that we headed to the dining hall to start the solemn dinner party. Other commanders and officers stayed at the outlying terrace. We were happy and content, our mood was festive. Not a single shot could be heard, everything was quiet at the front, maybe even too quiet. This was truly a nice summer day. I received friendly greetings and commendations from Army representatives. Later on General Lindemann thanked the Spanish government for its concern and the decorations it presented him.

Just as the Colonel-General finished his last words, our house was subjected to an attack from the air. Window frames were blown out by shockwaves, doors started opening and closing. At first we thought it was an air raid that was being carried out from a very high altitude, but then we understood we had been under attack of Russian artillery. Within minutes the surrounding park turned into a windfallen wood mixed with a deeply plown field. All of my guests and comrades froze in shock, standing at the table with their glasses raised. After the first wave we all quickly ran to the cellar. Three days before this I ordered to equip the cellar as a command HQ with a telephone, radio, etc. We thought that on that day the entire high command of the 18th Army could have been destroyed in a single blow. Everybody was waiting for another round of shelling which was about to spell ineviatable death for us."

The first wave of explosions turned the cars around the palace into scrap metal, the second wave hit the palace building itself, the third wave struck the area around the bus which brought variety show artists and and the neighbouring premises.
The Spanish General remembered: "It was difficult for us to finish this dinner, as all drivers were wounded and their cars, including the one that belonged to General Lindemann, smashed. All in all, 38 wounded people were taken to the hospital, including Major Alemann. He sustained a head injury and died 3 days later). Among the wounded there was a priest, one officer, three drivers, several orderlies, one cook, liaisons, scribes and many others. The ancient aristocratic castle was heavily damaged: its kitchen, dining room and work study were completely destroyed. The roof and walls were all covered in holes and cracks..."

The building of the mansion remained in ruins until 2012 when a private investor purchased it and the main building was restored by the end of 2016. However, although the facade seems to have been completely restored, the building is still closed for the public and surrounded by a concrete fence I had to climb over to take this picture.