Now and Then - Sevastyanov's air ram 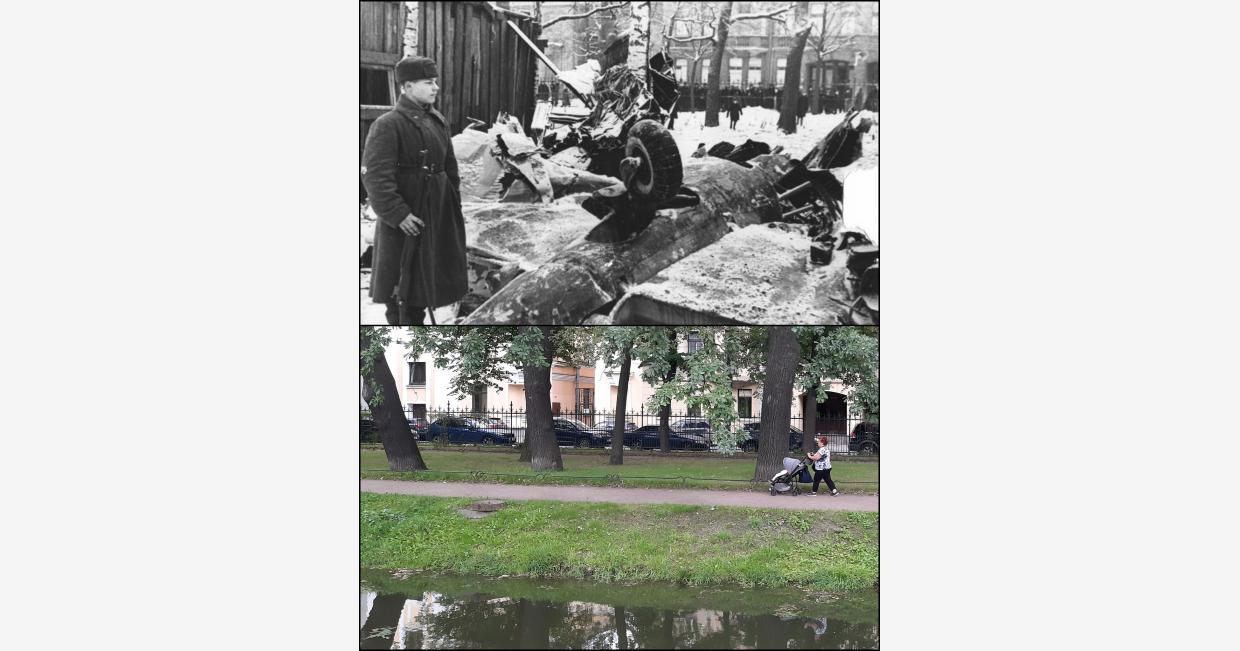 During my tour of the Siege exhibition, when I stand in front of the debris of the German bomber, I normally mention my grandmother, Shmidke Maria Serveyevna, who was awarded the medal "For the Defense of Leningrad" and who quite likely witnessed the famous ramming attack. The German plane was lit up by searchlights and I have come across memoirs and diary entries of people who saw the incident from quite distant areas of the city. However, according to the following passage from the book by General A. Novikov, who was in charge of the Leningrad Front Air Force, she could have quite possibly played an ever greater role in that episode than a mere eyewitness:

"The pilot Sevastyanov told me later that the strong collision threw him out of the cockpit and he even fainted for a moment. Having regained consciousness, he opened the parachute and accidentally landed on the grounds of Lenin Nevsky Machine Building Plant. Coincidentally, he had a conversation with the delegation of workers from this very factory the same evening at his airfield in Uglovo, just before he scrambled his plane to intercept the bombers.

"The women who captured me", continued Sevastyanov, "first took me for a Fascist pilot in Soviet uniform who wanted to escape from behind the enemy lines, and some of them even attempted to punch me when they led me to the factory director's office. This is where I was recognised by the men who had just seen me in my regimental quarters and the situation changed completely. During my descent on the parachute my fur boots fell off and I was only wearing socks on my feet. They gave me valenki, treated me to hot tea and took me to the Air Corps' HQ".

Unfortunately, there's no way of knowing for sure whether my grandmother was among the women who "captured" the future Hero of the Soviet Union, because she died when I was only 3 years old...

From the memoirs of Vladimir Kondratyev, Leningrad Siege survivor:

"The 7th Air Corps' HQ was located on the first floor of house #8 on Baskov lane. And my family lived just next floor above it. During the battle, we, 12 and 13 years old lads, stayed on the rooftop just in case incendiary bombs started falling. We saw the "Seagull" (nickname for I-153 fighter plane) crash in the courtyard of the house on the other side of the streets where tsarist stables used to be before the Revolution. The bomber plane fell further away, in the Taurida Garden. It appeared that its crew landed on Mayakovsky street where it was arrested by my mom and other female soldiers of the extermination battalion who were patrolling the streets of Dzerzhinsky district at the time. [Two men of the bomber's crew were killed during the crash, one pilot was arrested near Mayakovskogo street while another was arrested on Marat street, less than 1 km away - Alexander Shmidke]

They also took the Germans to the HQ of the 7th Air Corps. My mother said the pilot with two Iron Crosses behaved arrogantly, but when he saw Alexey, the German attempted a smile and stretched his hand out to him, but quickly retracted it, having noticed hatred and disgust in his eyes...

The next morning we, "Gavroches of the Siege" from Baskov lane, assisted First Sergeant of the special technical team P.A. Kulish, whose job was to recover both our and enemy shot down planes, to pull the Heinkel from a ditch in the Taurida Gardens. Having taken a tablet with a flight map, hand compass, pistol and other personal belongings from the body of a dead second pilot, First Sergeant Peter Ananievich told us: "These are historical documents". Indeed, I saw them all later on the war trophy exhibition panel in the Siege of Leningrad Museum"..."