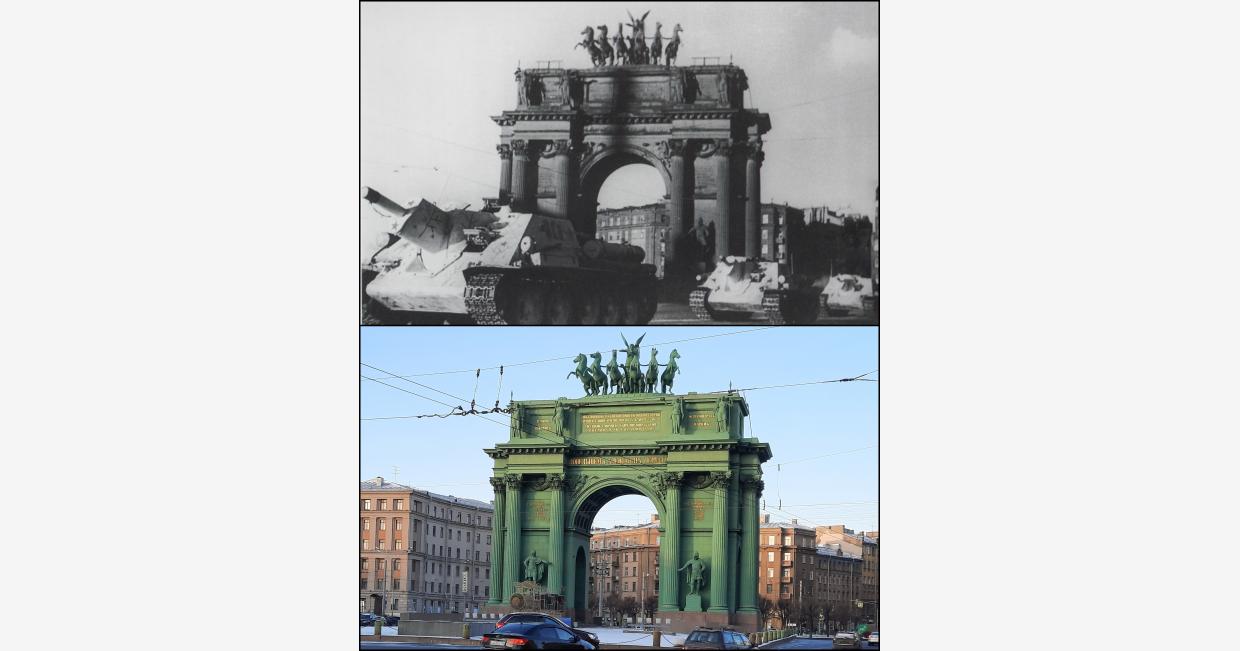 SU-122 self-propelled guns driving past the Narva Gate to the front.

"I "caught" the Party Bureau secretary Volkov and finally handed him my Party membership application I wrote just before the start of our offensive. I kept it in the left pocket of my soldier tunic along with the Young Communist League member's card all the time. If anything happens to me, consider me a Communist... It might be naive and not very original, yet it's sincere. [In January 1991 Dunayevskaya wrote a statement on quitting her membership in the party, having become disillusioned in its ideals after the revelations of the Perestroika era. As she said, "I quit it as sincerely as I joined it" - Alexander Shmidke]

The entire signals company, radio operator Larichev and deputy chief of staff Nalesny are totally wasted. It's disgusting. Now they are all lying around. Former convicts are a surprisingly sentimental crowd: scout Pasha nicknamed "Bedouin" has a tobacco pouch with embroidered inscription: "When you get tired after fighting, sit down, take rest and have a smoke!" He often follows this advice and is immensely proud of this gift that was sent to the front without a return address - "to whoever likes it" - and without the sender's name (probably female), which Bedouin wished he could have found, but never managed to.

In the evening a German plane circled over our HQ for a long time, clattering like a tractor. Then it strafed us from its machine guns with tracer bullets and left, fortunately without hitting anyone. Our 76mm gun battery was firing next to us, so probably this visit was meant for them. Thankfully, no one was hit there either.

The body of Zuikov was brought from the frontline. Zuikov, the commander of the 3rd Rifle Battalion of our regiment, that very Red Devil, was a dashing man and everybody's favourite. But those present at the time just squinted at the body indifferently, without even coming closer - only his liaison took his cap off. So much for a funeral service!

In the night I. M. Dv. called me to tell that Gunitsky was heavily wounded.

I spent the night in the construction detachment together with Captain Fyodor Demidov and liaison officers. In the morning I and Captains Demidov and Volkov (Party Bureau secretary) went to Belyaevskoye bog to examine knocked out German tanks and vehicles. They were all finely crafted, but were far behind ours in terms of steel hardness and fighting qualities, as my companions explained. On the road a very young fair-haired German lay dead in a very natural pose, as if he was alive. Three charred corpses of German soldiers were still sitting on the front seat of their huge machine. And here on the road, under the ice, as if under glass, there were more bodies of our soldiers, pressed into a narrow sheet by the heavy fighting machines which had passed there recently.

In the distance there were greyish-white surroundings, greyish-brown trunks of pines, sporadic pale green forest. All colours are austere, cold, lonely, only in some places there are tender and warm shades of green."