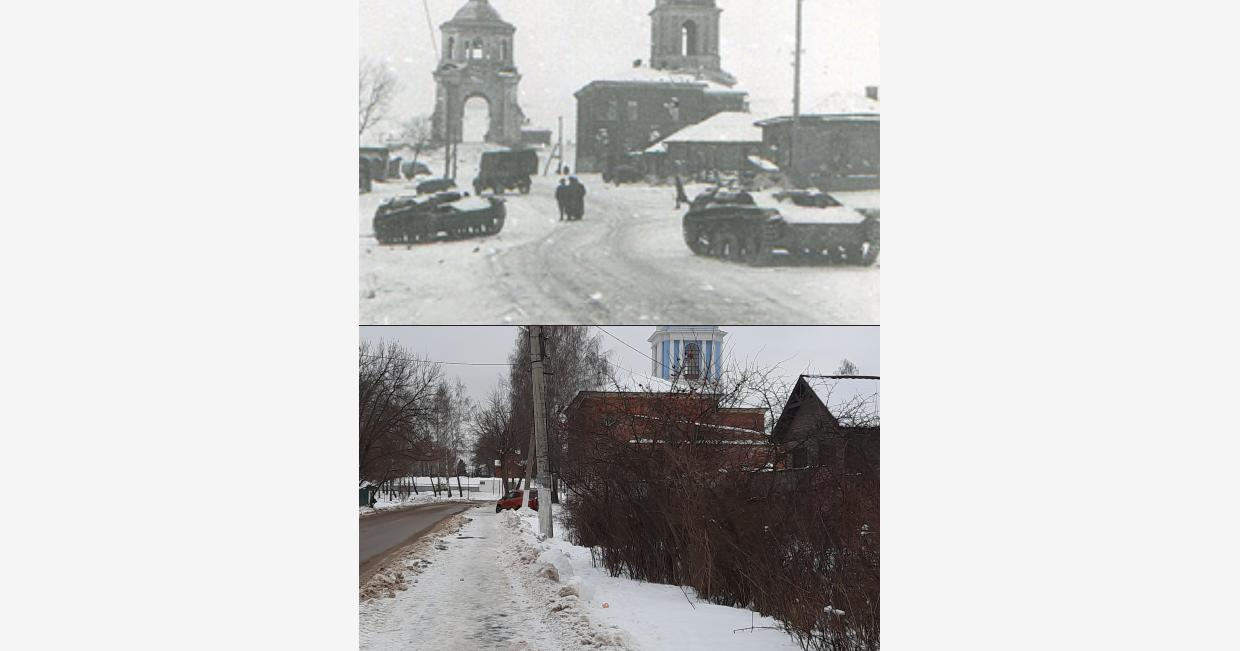 German soldiers at the crossing of Svobodnaya and Proletarskaya streets next to burnt down Soviet T-60 tanks. The St. Nicholas church can be seen in the background. It was heavily damaged in the fighting and taken down after the war as it was recognised to be both ruined beyond repair and an "ideologically harmful" religious site. The bell tower was spared such destruction during the war and proved too costly for Soviet authorities to demolish later. A few years ago it was restored.

A group of T-60 tanks took part in the fighting for Venev. Possessing weak armament which was incapable to penetrate the armour of German tank even at the distance of 100 meters, they were meant to provide support for heavy KV-1 tanks against infantry attacks. However being short on radios and a clear plan of coordination with other units, they became easy prey for the enemy and played virtually no part in the city's defense. Of the vehicles which fought inside the city 1 KV-1 tank was burnt down, 2 T-34 tanks, 1 KV-1 tank, 8 T-60 tanks, 3 37mm guns, 4 85mm AA guns, 2 122mm howitzers, 3 passenger cars, 8 trucks and a radio unit were lost. Five T-60 tanks managed to escape the encirclement. Abandoned by infantry and tanks, AA gun crews defended to the last man.

After the defeat of Soviet units the Germans captured several hundred POWs who were accommodated in unheated buildings of the military commissariat and the Resurrection church in severe cold. At the time the Germans were still hopeful of the quick fall of Moscow, after which the fall of the Soviet government was seen to be imminent. This would have spared them the necessity to take care of the prisoners. This also neatly matched their belief in the extermination of Slavic "untermenschen", especially those "infected with Communism", and the POWs were doomed to starve and die of diseases. The German commanders took as much care of the prisoners as it was only required to avoid massive epidemic outbursts which threatened their own soldiers.

One of the few survivors of German captivity in Venev, private Ivan Pavlovich Zotov testified the following during his questioning after the liberation: " We were led into Venev in the morning on the 26th of November, and we stayed there until December 9. We were liberated when the Red Army recaptured Venev on December, 9. During our captivity we stayed inside the military commissariat building. We were fed this way: they didn't give us anything for the first 3 days, then we were issued one bowl of pea soup with horse meat without bread. We weren't given any water and weren't allowed to scoop snow from the outside to melt it. I only drank water 2 times in 14 days. It was extremely cold. When we went to the the kitchen to get soup we managed to steal some frozen potatoes and bake them.

There were so many of us in the building there was nowhere to sit and we slept in standing positions. We went to take a dump in the corner over each others' heads. In these 14 days they never interrogated or even talked to us. All our best gear and clothes were confiscated and I only had boots and trousers left, everything else was taken away. Our sentries were Finns, who abused us all the time [Neither regular Finnish formations nor volunteers took part in the Battle of Moscow. Nevertheless the legend of the Finns in German ranks there appeared to be fairly widespread among both soldiers and civilians, possibly as a belated echo of the Winter War. Having struck a conversation with one woman from Kamenka, near Mordves, I learned that her mother survived the occupation in the neighbouring village of Polozkovo and that there were Finnish soldiers in the garrison. Nevertheless, there is no documentary evidence of their presence from either side - Alexander Shmidke] If someone managed to steal water, they were beaten by sticks, and sometimes shot. For example, one day before our liberation two POWs were killed for scooping water from a water tank."

From the memoirs of Marina Anatolievna Fadeeva: "The Fascists drove Red Army soldiers right here, into the Resurrection Cathedral [Located a few hundred meters from the place where this picture was taken - Alexander Shmidke], after capturing them on the outskirts of Venev. The Germans took off their shoes, clothes, mittens... In severe cold they were locked up to die in the building of the half-ruined church without food and water. Under the fear of execution the locals brought whatever scraps of food they could find to feed them. It is still unknown how many of them were inside the cathedral".

The local resident Antonina Alexandrovna Rusakova, who was 15 at the time, confirmed this: "How many of them were there is hard to count. All of them were driven there: deprived of food, water, heat, undressed and shoeless. What happened to them no one knows. No one entered there. They were locked with a metal padlock." In another interview she elaborated: "It was very cold that December, the trees creaked with frost, and our POWs were herded into the building of the Resurrection Cathedral and left there starving. Since the Germans wore light summer uniforms, they robbed Red Army soldiers of their hats, felt boots and overcoats. During their retreat the Germans set fire to all surviving two-storey buildings and use the remaining POWs as a human shield".

After the start of the Moscow Counteroffensive on December 5-6, 1941 the 1st Guards Cavalry Corps led by General Pavel Alexeyevich Belov rapidly advanced to Venev from Mordves, from north to south. The success of the Soviet cavalry forced the Germans into a hasty retreat, during which a 62 year old peasant Ivan Petrovich Ivanov from the village of Lishnyagi committed a heroic feat on December 8, 1941. After getting beaten by German soldiers for his refusal to show the road to Podkhozheye, he grudgingly agreed to act as a guide. But instead of walking along a wide road with firm surface, hidden by a thick layer of snow, he led them along a narrow path which descended into a ravine. Having realised they were duped, the Germans killed the old man, but had to abandon all their vehicles in order to escape from the pursuit of the Red cavalry. The writing on his gravestone reads that he was a partisan, however he was neither a member of a partisan group nor received any instructions from the government or the army.

On the day of the liberation of Venev, the Combat Journal of the 9th Guards Cavalry Division briefly mentions the following: "Beside that, the Germans abandoned 100 of our POWs in Venev". These seem to be the only ones who managed to survive the two weeks of German captivity.

From the memoirs of Major General Georgy Nikolayevich Perventsev, former Chief of Staff of the 173rd Rifle Division which took part in the liberation of the city: "In Venev we liberated 140 prisoners from Fascist captivity. The rescued soldiers told us about terrible beatings and shootings of Soviet POWs. During their retreat from Venev the Fascists executed and burnt more than 100 gravely wounded Soviet POWs. The building of the military commissariat where 80 wounded prisoners were kept was prepared for demolition, but they didn't manage to blow it up because our units captured the town in a storm. However, the tormentors managed to burn several of our soldiers. Their charred bodies were buried right after the liberation of the town. This atrocity was forever etched in the memory of those who took part in the burial. The liberated POW Red Army soldiers F. Knyazyuk and I. Bayanov urged their liberators to avenge for their tortured comrades".

Articles from local history websites veneva.ru, stalinogorsk.ru and "Tulskiye Izvestia" were used in writing this and other posts on Venev and the battle of Moscow.