Now and Then - Tanks at the Red Square parade 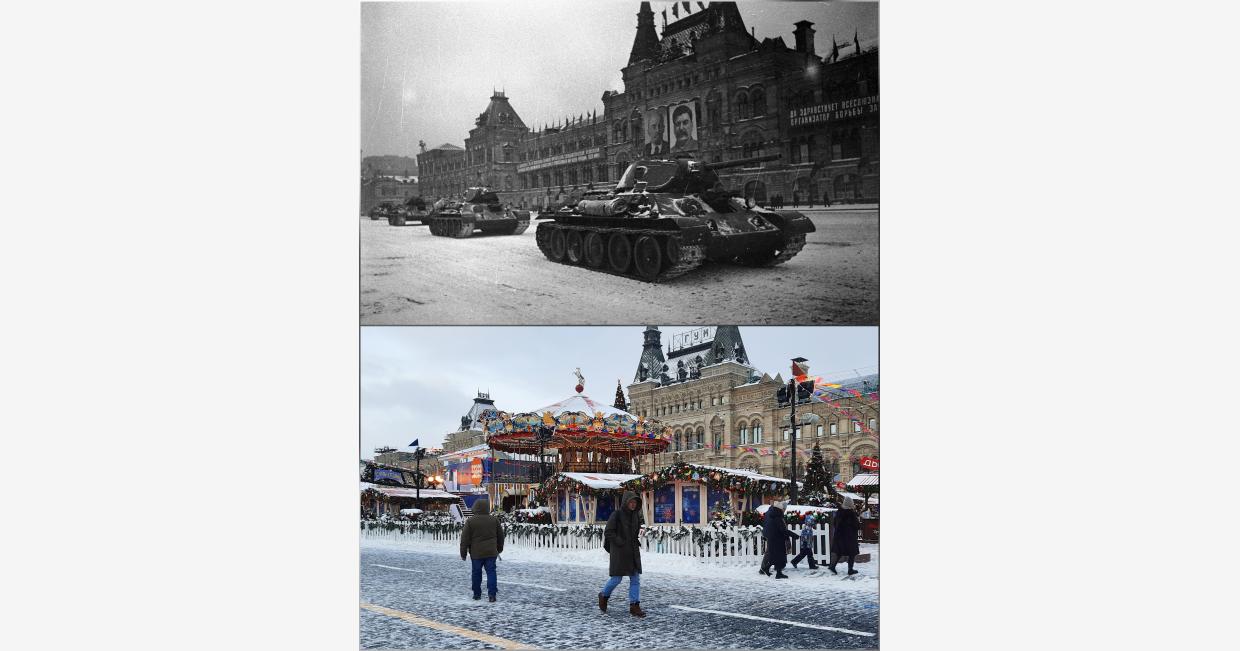 T-34 tanks driving across the square during the October Revolution parade and heading straight to the front. At the time, German troops were less than 100km from Moscow.

The history of the famous parade on the Red Square has been described in detail in numerous books, articles and documentaries. Nevertheless, one incident that happened at the very end of the event got fraught with all sorts of rumours. When heavy KV-1 tanks rolled into the square in a closing sequence, two tanks at the end of the column suddenly turned 180 degrees and drove back to the building of the Historical Museum.

The articles I've read about this incident offered different versions: some said the tanks had to pull another tank which got stuck at the foot of the slope leading to the square, some mentioned Stalin noticing this turn and ordering Vlasik, the chief of his personal guard, to investigate this incident, and some articles claimed these were not KV's but T-34's. After doing a bit of research I found the most plausible explanation of this "wandering tanks" episode, from my point of view, in the book of A. Bondarenko "Moscow on the frontline". In the chapter dedicated to this event he published an interview with Major-General Nikolay Andreyevich Kolosov, who was the Commissar of the tank group at the parade:

"The passage of tank forces, and the parade itself, was concluded by the heavy KV's, which were lined up in platoon rows of two machines in each... After the last platoon had passed by the Mausoleum, we breathed with relief - everything seemed to have gone smoothly. But just as we were about to leave our post, we suddenly saw 2 KVs moving our way! Stopping a tank driving in a combat mode, which means with its hatches closed, is no easy task, especially in the conditions of extremely low visibility caused by heavy snowfall, which severely limited the already narrow scopes of observation for the driver-mechanic and the commander. Yet we managed to stop this platoon by our joint efforts when it rolled up to the very hotel "Moscow".

Like I said, the tanks were met at the end of the square by a special reception group. By the end of the parade everybody got seriously cold and wet in such weather. When the last combat machines appeared one of the officers from this group thought of nothing better than telling the last tank crews to speed up in order to leave the square sooner. In accordance to the regulations he held two flags in his hand, a white one and a red one. He waved both of them along the direction of the traffic - like, make haste, guys!

An experienced crew would have understood it this way, but the platoon commander was a lieutenant fresh from a tank school. He took the signal literally - exactly as he was taught. Formally, the signal with two folded flags in one meant "about face". Although the lieutenant was surprised, due to his young age he decided to obey the command and forwarded it to the crew of the other tank...

Luckily, the high state officials who watched the parade from the Mausoleum, had already left, and the rest of the guests naturally decided it was part of the plan... The incident had no negative consequences for anyone involved".