Now and Then - Venev under occupation 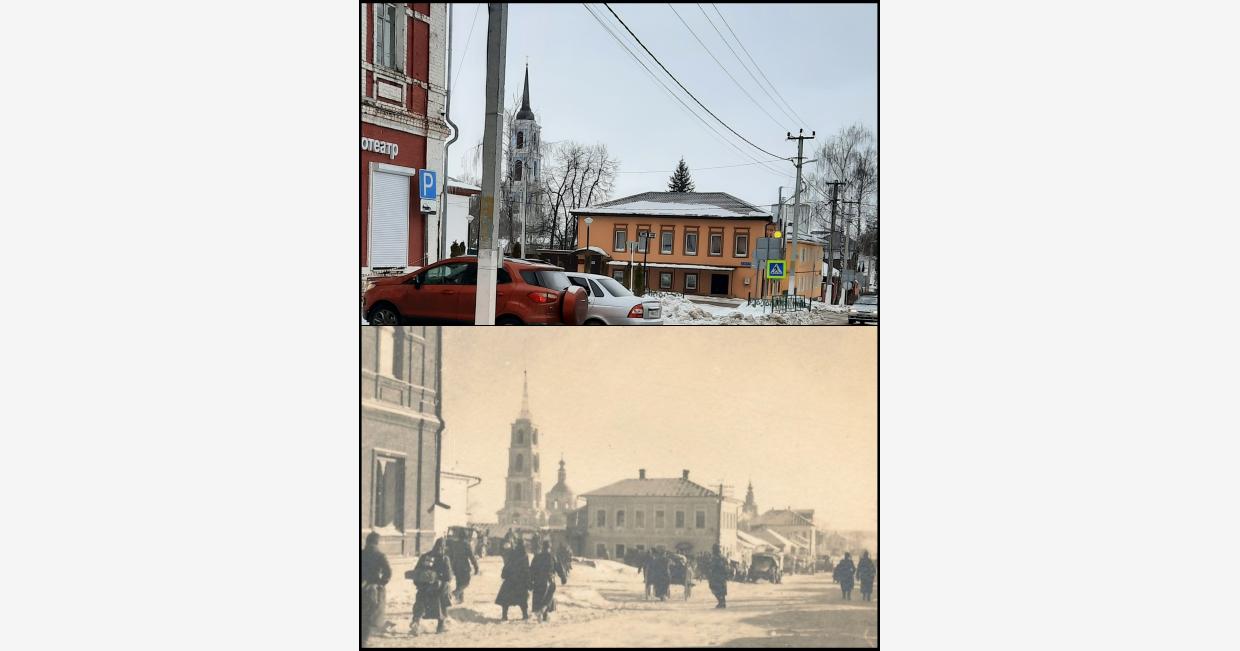 German troops on the streets of Venev.

Captured by units of the Bryansk Front in the area to the northwest of Mtsensk on January 10, 1942.

We were ordered to start the march at 4:00am. The retreat is being conducted in a feverish manner. Our soldiers are already giving in to panic. Everyone wants to escape first on his vehicle, and it results in traffic jams which keep building up. We retreated to 15 km and occupied an new defensive line. An endless number of troops is marching back. I can see heavy artillery, AA guns of all sizes, armoured cars, tanks, infantry regiments, carriages, etc. The path of retreat looks devastated. The 4th Panzer Division is extremely diligent in fulfilling its orders to destroy everything that can't be transported. Field kitchens, filled with foodstuffs, valuable canned preserves went up in the air. Brand new heavy trucks, four-axle armoured cars, a large number of trucks and tanks have been destroyed. Millions' worth of value has gone up in the air. We were ordered to burn all populated areas we abandon to ashes. All area surrounding Venev must be purged and incinerated.

This is the most cruel of all wars that have ever been fought. All civilians are deprived of food and shelter and doomed to death of starvation and exposure. However, we have no reasons to show mercy, considering that Russians bomb all population centers where German soldiers are garrisoned haphazardly. If these bombings ever yield any casualties, they are normally civilians. They treat their own people no better, or probably even worse [Real or imagined war crimes of the enemy are a recurrent motif in German soldiers' diaries. As this example shows, their mentions were first of all necessitated by the desire to rationalise their own crimes which were perpetrated on a systematic basis - Alexander Shmidke]

At 3am I was hitting the road already. There's a lack of vehicles, and part of the people marches on foot or seeks for other means of transport. We reached the regimental headquarters, where we were incorporated in the staff battalion column. A heavy snowstorm that even the thickest overcoat can't protect against. We're going back to Venev and we're completely in the dark as to what's going on. After going through much hassle we stopped at one big village 10km away from Venev. In the recent days we haven't had any food, or maybe just tiny morsels of it. Now that we've got separated from the company, we have to forage for food, which consists exclusively of potatoes in Russia, on our own.

When we woke up in the morning we found out that the units which used to be garrisoned here had already retreated. Since there was no one to explain us the situation, we considered it reasonable to get out of there. We started our journey on 3 horse driven sleds. We're following the route of the 119th Motorised Infantry Regiment. Luckily, we met our signals equipment vehicle. We showed us they way. My little horse doesn't want to walk any more, and I'm getting of it. I seated myself in the signals car, which had come back by that point. When we caught up with the company, they were already going to leave. Everybody is anxious. My platoon commander yelled to me to get myself a car, cause the Russians are advancing. I jumped in the signals car again. Meanwhile, our people torched the village. We are driving from [omitted] to [omitted], the distance is 30km. When I got off the car, I found out that the company manned its defenses 500 meters away from here. Our company is covering the retreat of the 119th Motorised Infantry Regiment, which was meant to break through in a different direction, as the planned retreat route was cut off by the Russians.

December 10, 1941. At 3:00am the company marched further. There was no fire contact with the enemy. However, our motorcycle-infantry battalion was heavily battered by the Russians [note: in the area of Gremyacheye]

[End of the diary]

Articles and photos from local history websites veneva.ru, stalinogorsk.ru were used in writing this and other posts on Venev and the battle of Moscow.