Now and then - Victory Day in Leningrad 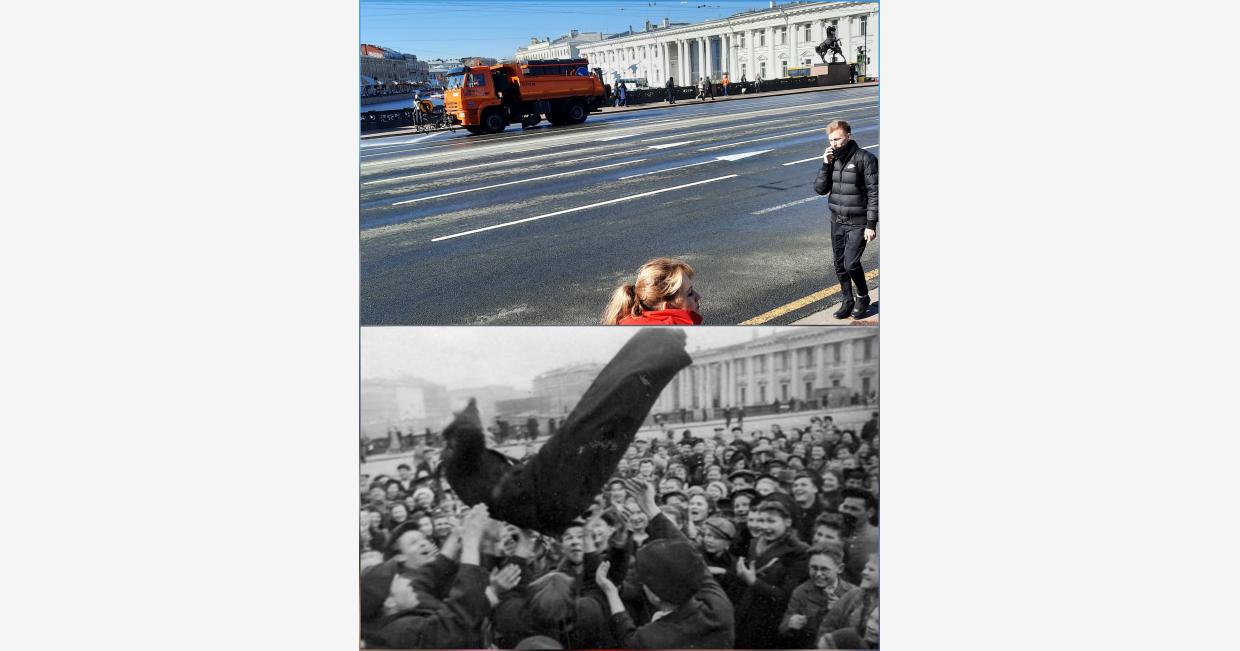 Overjoyed Leningraders throwing each other up in the air.

"It's scary to think I'm living in peacetime again. In these four years we've got so used to realising we were living in wartime, that there was heavy fighting going on, blood was flowing, that we had to suffer privations, work and live to save our community and for the cause of the future victory. And here it came, this victory. Previously we could only speak of peacetime while remembering the days gone by.

And now the peacetime is not just in the past, it's come again. It's hard to believe, hard to grasp. But it is true, it's here!

Yesterday at 10am everyone gathered for meetings at their organisations. Lina and Maya picked me up. We went to the institute together. We always have wonderful populous meetings: professors, teachers, students of the institute and the entire hospital. We gathered at Lenin's Hall. Lots of speeches. Everyone was excited, applauding all the time. At first they didn't let speakers finish, applauding in the honour of victory, in the honour of Stalin. They cried hurrah, cried, laughed. The meeting was quite long. Afterwards we lined up and marched in a demonstration under banners to an all-district meeting in the State Community Center. We felt delighted to march together. This was our first demonstration in four years. The entire district gathered there. We couldn't hear a word but cried hurrah when another wave of victory cries rolled over us. A gun salute thundered and we got frightened instinctively for a moment, remembering the shellings, then we applauded: coloured rockets flew in the air. We found our lecturers, congratulated them, hugged them, kissed everybody. This was true joy, the joy of victory celebrations.

Back in the morning, having left our house, we met Asya and Lyalya Serdnak at the corner of Roentgen street and Kirovsky prospekt, they were going to their school for a meeting. We arranged to meet at the same street corner in the evening, in order to walk around the city in the evening. We strolled down the Kirovsky and headed for the Palace square.

There was a lot of people on the square already. There was a concert on the scaffold, films were shown on the sides, and a orchestra played dance music on the podium.

There were fireworks at 10am. I'll never forget this sight. We were on the embankment between Kirovsky and Palace bridges. Gun salvoes rolled from all sides, and were were surrounded by sheaves of coloured rockets. There was twilight, but the Neva was light by flashes so well that crowds of people on the other bank were visible. The beauty of river banks, the grandeur of the Neva, the triumph of rockets darting up in the sky, the colours and our own feelings - all of this melded into a unified harmony of beauty and power.

Everyone stood still and contemplated this majestic picture in silent admiration, with each of us feeling like a lucky witness to this grand happening."