Now and Then - Yepifan 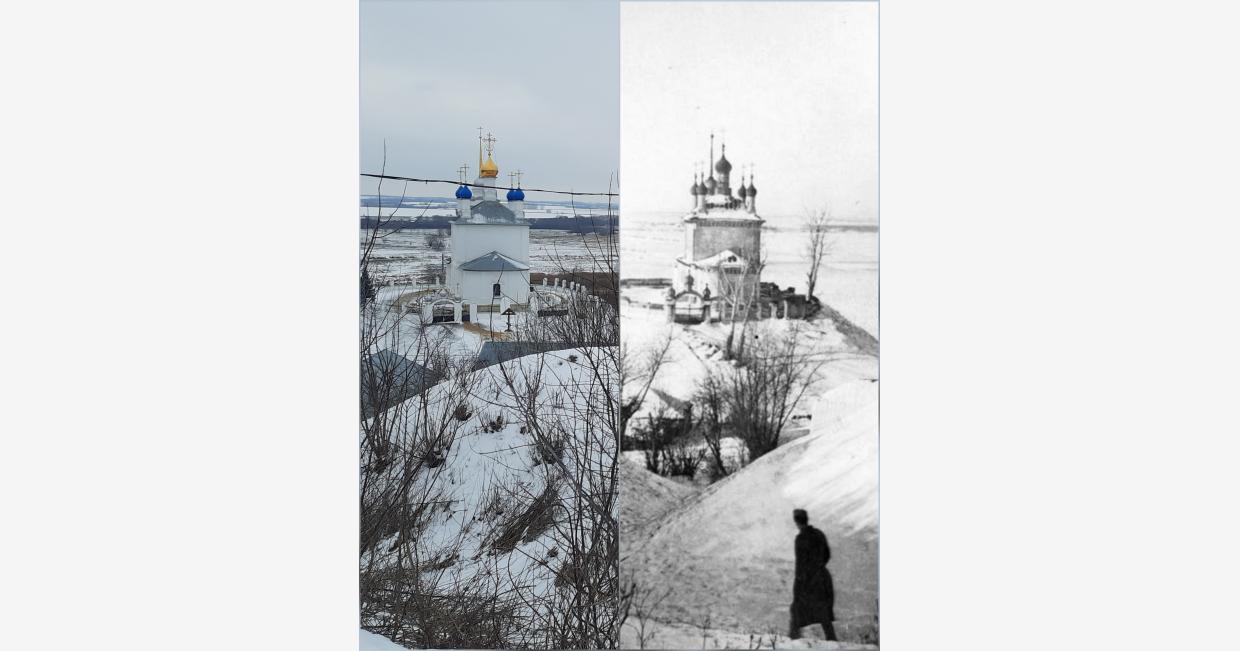 A German soldier standing on a hill in front of the Dormition church.

In the middle of November 1941 Guderian's troops continued their advance, expanding simultaneously to the north and east of Tula. Right after the capture of Stalinogorsk (now Novomoskovsk), units of the German 29th Motorised Division captured the village Olkhovets located to the northeast of the town, trapping the 239th Rifle Division led by Colonel Gaik Oganesovich Martirosyan in a near complete encirclement. However what followed was not the typical development of the Blitzkrieg phase in the war, when the worst the Germans could normally expect was passive resistance on part of disorganised Soviet troops. In the night of November 25th the division made a sudden breakout attempt in the sectors where it was least expected. This is how the consequences of this attack were described in Guderian's memoirs:

"In the morning I learned from General Lemelsen, in Yepifan, that a crisis had arisen in the 29th (Motorized) Infantry Division during the course of the night. The mass of the 239th Siberian Rifle Division, abandoning their guns and vehicles, had succeeded in breaking out eastwards. The thinly spread 29th Division had failed to prevent this and had suffered heavy casualties while attempting to do so.

I went by way of the divisional headquarters to the hardest hit of the regiments. Infantry Regiment 71. At first I was of the opinion that a failure of reconnaissance and security arrangements had been the cause of the misfortune. Reports by the battalion and company commanders, however, made it quite clear that the troops had done their duty and had been simply overwhelmed by numerical superiority. The great number of dead, all in full uniform and with their weapons in their hand, were grim proof of the truth of what I had heard. I did my best to encourage the badly shaken soldiers and to help them get over their misfortune. The Siberians — though without their heavy weapons and vehicles — had slipped away because we had just not had the strength to stop them. This was the most disturbing single factor of the day."

However, the famed German General either didn't have the full picture of the events that unfolded that night, or decided to slightly skirt around the truth in order not to give due credit to his opponents. Here is how this episode was covered in the memoirs of Colonel Martirosyan:

"By the end of the day of November 24th, 1941 our units found themselves in an grave situation. The enemy wanted to encircle and annihilate us at a time when our division appeared to be cut off far away from the rest of our army. The critically dire cicumstances, extreme lack of food and ammunition and the absence of any communication with the Front headquarters prompted our commanders to take drastic measures. We regrouped our forces and formed shock groups for the forthcoming night action. At 18.00 on that day I took the following decision: leave a rear guard in the area of Uzlovaya (the town and the station), Bogoroditsk and Dedilovo for the defense and break out of the enemy encirclement with the strength of 3 rifle regiments, a tank battalion, all our artillery and mortars in the eastern and northeastern direction towards Stalinogorsk-1, Gagarino, Spasskoye, Malinovsky and Olkhovets. The objective for the assaulting force was to attack and destroy units of the enemy 29th and 10th Motorised Divisions and escape from the encirclement towards Pronsk [this town is located about 40 km east of Mikhailov - Alexander Shmidke]

These nighttime attacks turned out to be a complete surprise to our enemy. The Fascists were confident that our soldiers would lay down their arms in encirclement. In the dark of the night our units (partly on skis and mostly on sleds) approached their attack objectives with the guidance of local partisans. The first to face the Hitlerites were scouts under the command of Boris Gorokhov (817th Rifle Regiment). In the area of Krasnoye Solntsevo-Olkhovets they destroyed two enemy patrols and killed sentries of enemy divisional headquarters almost without a sound. Privates of our 817th Rifle Regiment Andrew Korobov, Fyodor Kravchenko, Migran Serboyan and Lieutenant Igor Kozlov approached a stone building on the town's outskirts and tossed hand grenades in its windows. Not a single enemy officer survived. In the area of Gagarino Lieutenant Serafim Barsukov, Sergeant T. Arustamyan and a platoon of soldiers set German tanks on fire with Molotov cocktails and anti-tank grenades. During the night attack on Spasskoye Lieutenant Grigory Anisimov and Sergeant Vasily Shestakov set fire to enemy fuel tank cars and supply trucks. When the Hitlerites rushed to put the fire out, units of the 813th Regiment attacked them, utilising the confusion in enemy ranks.

During these encirclement breakout battles the enemy suffered more than 2000 casualties in the area of Spasskoye, Olkhovets, Krasnoye Solntsevo, Malinovsky and Gagarino. Headquarters of the 1st Motorised Regiment of the 10th and 29th Motorised Divisions were destroyed and a significant amount of trophies was captured: 18 75mm and 37mm guns, 12 machine guns, 68 submachine guns and 50 vehicles. Six sacks of operational documents captured in enemy headquarters were delivered to the headquarters of our 10th Army.

Night and night combat became our element. In the daytime we defended against enemy attacks which took place with active support of aircraft and tanks, and in the night we went on the offensive and inflicted serious losses on the enemy. In the night we could trace enemy location and movements by the fires, shell traces and numerous flares. The Germans were mortally afraid of the dark and this is why we succeeded in this difficult operation by fighting in the nighttime."

The town of Yepifan was burnt to the ground during period of its occupation from November 20th to December 16th, 1941. German troops set all wooden houses were set on fire during their retreat as part of their scorched earth tactics. Around 80 "undesirable" local residents were publicly executed in the town and the district around it, while almost every family lost their house. Here is what the famous Soviet poet, writer and correspondent Konstantin Simonov reported in an article for the official Red Army newspaper "Krasnaya Zvezda" the following day after the town's liberation:

"Now Yepifan is no more. Only a few carcasses of half-ruined churches tower amid vast charred debris. It's getting dark. Here and there tongues of flame run low through the ruins. Noxious odour of soot permeates the air, making it almost impossible to drive through the town. And yet our people came to the ashes of their houses, they stand, clenching their fists, peering at the ruins of their town, their eyes dry with hate. They came back here to live and work, and they will keep working on these ruins till they rebuild their town. The Germans couldn't crush us by the power of their guns - they won't stop us by razing our towns either."