Now and Then - Yuri Smirnov liberation of Gatchina 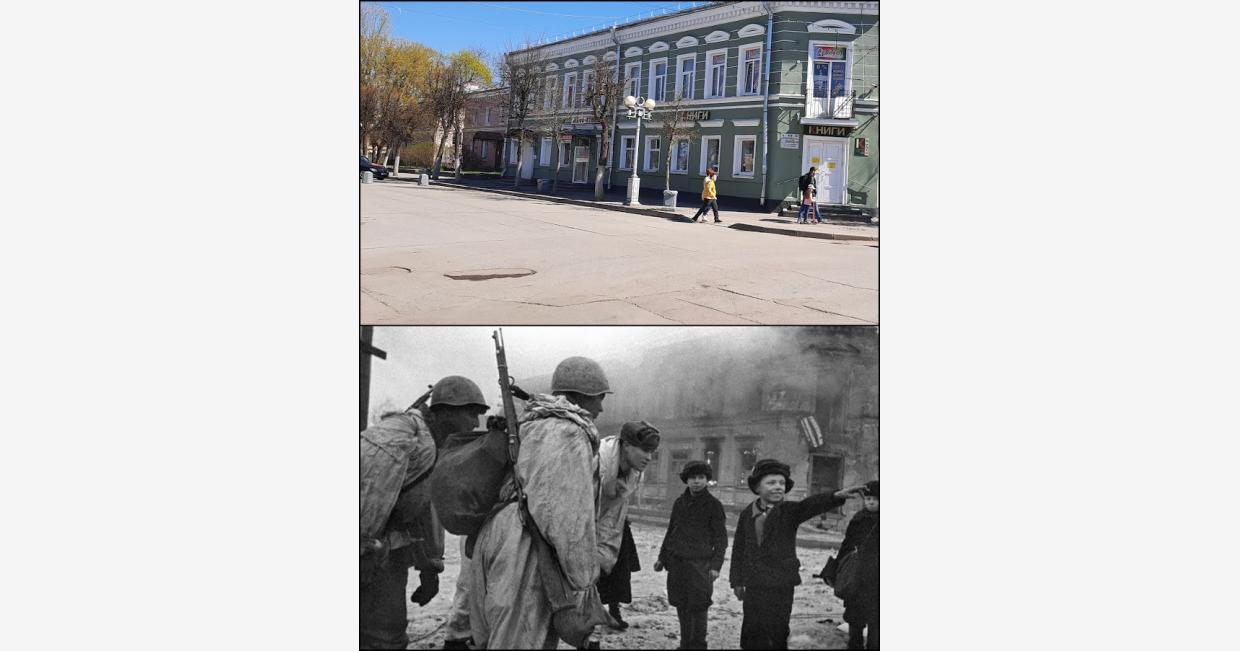 Nine year old Yuri Smirnov, son of a local partisan, pointing to the house where German machine gunners prepared an ambush. This photo was first taken with only this boy in the picture, but the other boys got upset just one kid got all the limelight, and the photographer asked the soldiers to reenact this episode with the rest of his friends.

From the memoirs of the Soviet soldiers who liberated the town:

"I wept when I saw Gatchina in January 1944. I wept with joy that I got  back, and I wept with resentment and pity. The Fascists didn't spare the  town. They tried to reduce it to ruins. They disfigured the parks  horribly. I was one of the first to enter the town, marching with the  attacking units. In 1944 I was already a commander of a mortar crew in  the rank of Senior Sergeant. I remember how the company commander Kononenko approached me and said: "Let's go liberate your town, soldier".

I can not express the joy of that minute to you. I laughed and acted like a little girl, forgetting that I was a commander. And then I marched forward. We were approaching Gatchina from the side of Krasnoye Selo [southwestern suburb of Leningrad, located to the north of Gatchina]. I've forgot many things. But I remember the 26th of January as clearly as if it were today.
Black clouds of smoke were floating over the town. Tongues of flame could be seen in many places. It was especially painful to see dark gaps in the place of the palace's  windows, from which fire was bursting out. I remember the order of the company commander not to conduct saturation shelling and only fire directly at identified targets in order to use up as little ammunition as possible! The order was made not in order to spare mortar shells but to preserve the city as much as possible.

I remembered the first encounters with Gatchina residents. Frankly, they didn't look very well. Many of them looked like shadows. However, everyone's eyes were brimming with joy. Of course! Their fears were over, their long night finally ended.

Our company suffered casualties in the fighting for Gatchina. We stayed in Bolshaya Zagvozdka for a few days to wait for replenishments for our unit. This is where we repaired our "samovars", as we called mortars back then, and patched up our uniforms".

"The night from January 25th to 26th was frosty. My unit was advancing from the side of Tatyanino [eastern district of  Gatchina]. By midday we already started meeting our soldiers. By the train station of Tatyanino all 2 storey houses got burnt down, mine included. I didn't want to go to see its charred ruins. On the 26th a thaw started and the day was cold and humid, there was so much slush our felt boots swelled with water and slurped as we walked. Everywhere we went in Gatchina we saw destroyed vehicles and corpses. Next to there  present-day city history museum there were German crosses, crosses all around. Unlike the infantry, we, artillerymen, had no casualties. Next to the gramophone factory, on the prospekt [of the 25 of October] we met three of our acquaintances (they survived the occupation) and talked to them. The locals looked dirty, gaunt, wrapped in some kind of rags...

There's another incident I remember. Our 51st brigade stayed to rest in Zagvozdka, in one of the houses on Ovrazhnaya street. The house was old and abandoned, its floor matted with straw on which we all slept. In about 2 or 3 days, and we stayed there until the 1st of  February, we sat down for a lunch, opened our tin cans and cut the bread. Suddenly we heard someone knocking on the floor from below. We were startled, then we brushed the straw aside and found a hatch leading to the basement. We opened it carefully and found 3 Germans hiding down below. One of them said in broken Russian they wanted to eat very much. We asked them: "Why didn't you escape with the rest?" The German said they hid there during our offensive, they thought of waiting it out till the Russians would leave. One of our guys said: "Nah, we're not gonna leave any more!" The Germans were taken to a special assembly point where the POWs were kept".

Colonel A. Batlyuk, Hero of the Soviet Union, commander of the 120th Rifle Division:

"The fighting continued all night. The Hitlerites defended the town with the ferocity of the doomed. They kept blowing up everything they could. They mined roads, valleys, houses. At the approaches to Gatchina, on its outskirts and in its center divisional and regimental combat engineers defused more than 5000 pressure activated mines and booby traps. The town's outskirts became an arena of the most intense fighting. Fascist machine gunners and submachine gunners occupied each stone house at each road intersection".

"In the morning of January 26th our detachment occupied firing positions in the area of Gatchina-Tovarnaya train station. The second  battery under the command of Lieutenant Abramov took an especially advantageous position. The artillerymen destroyed enemy vehicles and personnel who retreated from the town towards Khimozi village at point blank range. I could see trucks with German soldiers go up in the air in my binoculars.

In one of the barns near the train station the soldiers of my detachment found dead bodies of a woman and a 4 or 5 year old boy who were bestially murdered by the Fascists. The boy was bayoneted in the chest twice, in the chest and in the stomach, and the woman's stomach was ripped and her eyes gouged. Right there, standing by the corpses, soldiers and officers swore to avenge the Fascists for their atrocities..."