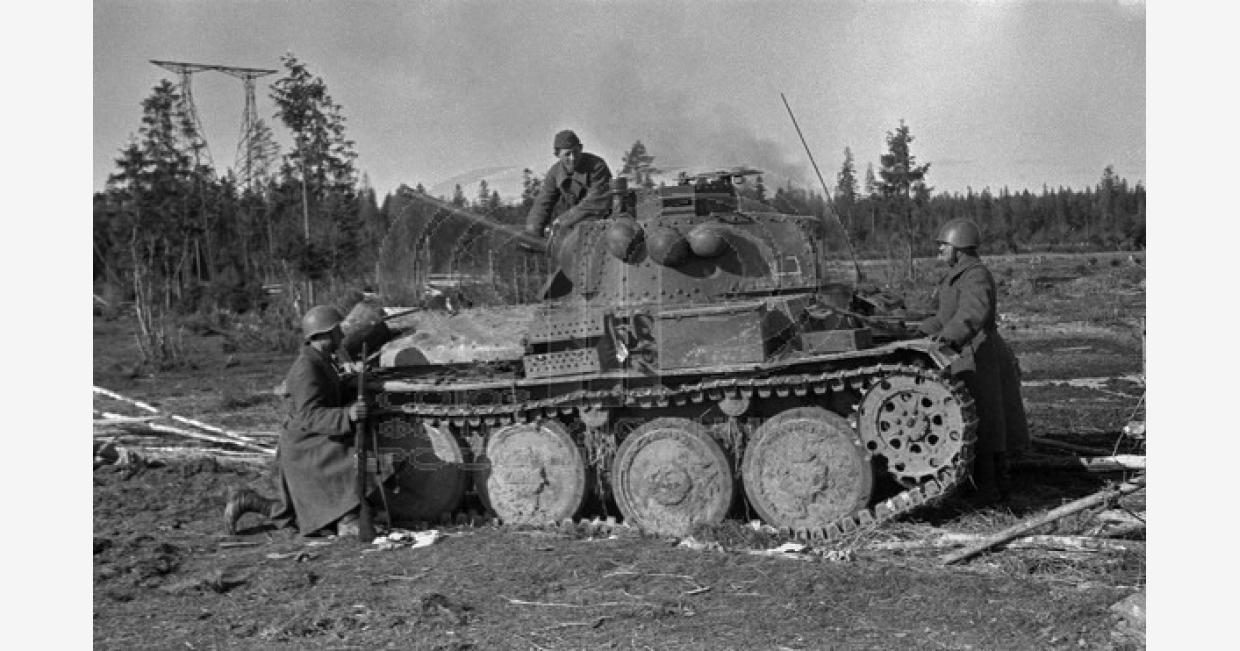 By mid-September 1941 the operational situation around Leningrad looked seriously dire for the Soviet defenders. On September 9 the 41st Motorised Corps broke through the Soviet defences around Krasnogvardeisk and thrust forward towards Leningrad. By September 12 German forces captured Krasnoye Selo, located only 25 km from the city center, along with several commanding heights around it. On the same da other units of the 18th Army all but encircled Krasnogvardeisk, the central strongpoint of the last major fortified line at the approaches to the city, and Soviet troops started hastily retreating from the town along the only available road to Pushkin to avoid being captured. While the city was bracing itself for street-to-street fighting, another important development took place about 40km further east, where General Kulik's 54 Army tried to mount an offensive to break through the German overland encirclement of the city. These events became nearly forgotten by the broad public, being overshadowed by the fighting at close approaches to Leningrad, however they bore an equal, if not greater strategic importance. 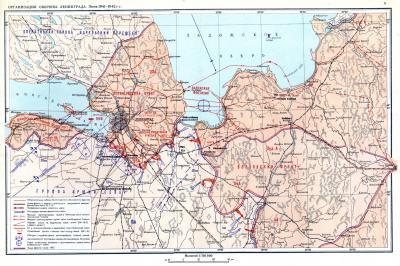 Kulik's offensive started literally within a day after the German capture of Schlisselburg. In order to prevent the Germans from crossing the Neva river, beyond which there were no Soviet forces large enough to resist their attacks, Kulik threw the 286th and 310th Rifle Divisions to recapture Mga. Both divisions were formed after the start of the war and had virtually no combat training. Their privates were made up of fresh recruits while officers and NCOs were drafted from the Army reserve. The 286th Division had no artillery at all. Both divisions started their attacks without any reconnaissance and no tank/artillery support. In the first battle they lost up to 1/5th of their personnel and were forced to retreat. However, this attack seriously alerted German commanders to the prospects of getting attacked in the rears and encircled, and it turned most of its forces in the area to the east: the 12th Panzer Division, 20th Motorised Division and the 21st Infantry Division. All Kulik had to oppose them at the frontline was the two abovementioned divisions and the 285th Rifle Division. In a couple of days were were joined by the 128th Rifle Division, 1st Mountain Rifle Brigade and the 21st Tank Division (which had no tanks left by that point). According to Kulik, "all what was left of them were their unit numbers". 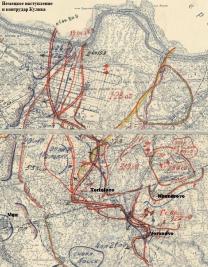 While all available Soviet forces, in spite of lack of strength and preparation, were committed to attacking the freshly formed Schlisselburg-Sinyavino bulge or "Flaschenhals" as the Germans called it, aiming to break through to encircled Soviet forces in Leningrad, the Germans prepared a classical flanking maneuver. The 12th Panzer Division and the 21th Infantry Division were ordered to attack Soviet defences in the area of Gaitolovo and Voronovo and push further northeast, enveloping the Soviet forces. While the rest of the German units managed to stop and push Soviet troops back, the 12th Panzer successfully captured Voronovo and advance to the village of Khandrovo. The pincer of the German attack started to look clearly shaped threatening Soviet forces in the area with a complete catastrophe. General Kulik was forced to immediately regroup his battered units to deal with the threat to his south and committed his last reserve - the freshly arrived 122nd Tank Brigade, the 1st Mountain Rifles which was replenished at the last moment with fresh recruits and an NKVD armoured train #82. The tank brigade had 7 KV-1, 22 T-34 and over 40 T-40 and T-30 tankettes. The armoured train comprised an armoured engine and three D-2 armoured carriages, each armed with 2 76mm guns and 12 machine guns.

By midday on September 12th, the German strike group of Oberstleuntant Wahl, made up of the 2nd battallion of the 25th Mot. regiment and the 2nd batallion of the 29th Pz. regiment ripped through the ranks of the 286th Rifle Division and advanced to about 1 kilometer south of Khandrovo. The battallion had predominantly Pz.38(t) tanks in its ranks. Although no data of their actual strength could be found, according to their OOB it was supposed to have about 50 tanks. By that time Soviet forces managed to regroup at an amazing speed for Red Army units circa 1941 and prepared a counterattack. After a short 20-minute artillery barrage Soviet forces attacked from 3 sides at 18.30. The 310th Rifles struck from the north while the 1st Mountain Rifles, supported by 3 KVs and 8 T-34s of the 122nd Tank Brigade and the armoured train, attacked from the south and southeast. 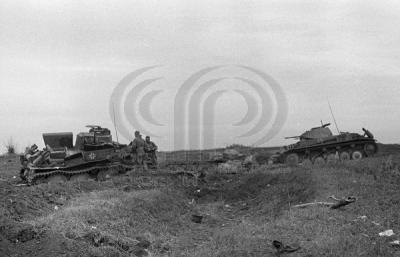 The boggy terrain in this area was poorly suited for German tanks with narrow tracks and offered them little space for maneuver. At the same time the wide tracks, rather than thicker armour, of T-34s played a vital role in that engagement. Driving through the bog much more easily, they could make circles around the Panzers, suddenly appearing on their sides and shooting them one after another. Although Wahl urgently requested 88mm guns which was the standard German remedy against medium and heavy Soviet tanks, they could not be delivered in time. In an hour the spearhead of a successful German offensive started looking like a slaughterhouse of Panzers, thrashed by both Soviet tanks and the accurate fire of the armoured train. German sources mentioned the use of flamethrowers, however none of the Soviet tanks had this capability and most likely they were employed by the infantry. Wahl requested a retreat, which was immediately sanctioned by the staff of the 12th Panzer, and he managed to extricate the last 16 remaining Panzers, leaving the battlefield, littered with damaged and burned German tank carcasses, in Soviet hands. A battalion of the 21st Inf. Div. provided delaying action as the panzers retreated. Soviet commanders decided against organising a pursuit of the enemy tanks as their forces needed to rest and regroup, while 122nd Tank Brigade was their last mobile reserve against an enemy conducting active attacks over a large area thinly protected by Soviet infantry. 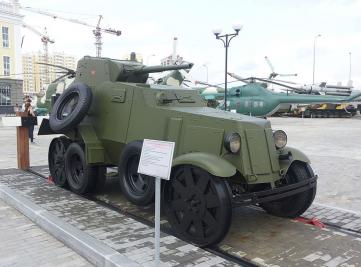 One of the most unusual vehicles to take part in this battle was a BA-10 armoured draisine under the command of Sergeant Yevgeny Yuminov. Having been sent by the commander of the amoured train to conduct reconnaissance in the area, he suddenly ran into German tanks. Although the machine was armed with a 45mm gun that was capable of taking out a Pz.38(t), its armour was only good against rifle bullets. Disregarding the danger of being outgunned and outnumbered, he boldly opened fire at the panzers at the extremely short distance of 50-100 meters. According to Soviet accounts, it managed to hit 4 tanks and 3 sd.Kfz's in the first engagement, went back to replenish it ammunition and went back into combat. In its second engagement it was hit by a German tank shell which killed Sergeant Yuminov and wounded the turret gunner Ivan Perepelkin. The crew of the armoured train claimed hitting 2 panzers, 1 anti-tank gun and several machine gun emplacements.

Although the unit history of the 12th Panzer barely mentions this episode, the scale of the German defeat can be traced by the numbers mentioned in Jentz's "Panzertruppen". On September 10th the division had 66 tanks, on September 18th it received a reinforcement of 36 vehicles (30 Pz.38(t) and 6 Pz.IV), and on September 21st its combat strength was 56 armoured vehicles. Therefore, in a few days of fighting in September 1941 it lost about 40 tanks. In its daily report to the HQ of the 39th Army Corps on September 13th, the 12th Panzer reported the total loss of 20 tanks the previous day. Soviet forces reported no irrecoverable tank losses on that day, however their infantry casualties were large. 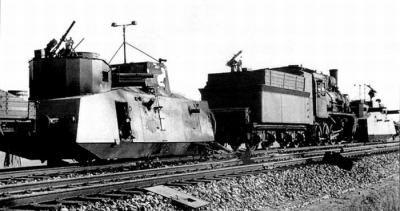 This Soviet victory had a significant strategic importance that is hard to overstate. Had the 12th Panzer been able to drive further into Soviet positions and encircled or enveloped the battle-worn Soviet units, it could get a virtually open road to Volkhov and Staraya Ladoga where only token Soviet forces were present. Even without going all the way to Svir to link up with the Finns, they could have effectively cut off the last narrow thread along which Leningrad received supplies and evacuated its population. Under this scenario, Leningrad could have fallen within a few months as the Germans predicted, with all global consequences it could have entailed for Operation Barbarossa and Operation Typhoon in 1941. General Kulik's efforts were not appreciated by Stalin who, together with Zhukov, blamed him for his inability to break through towards Soviet forces in Leningrad and he was relieved of command on September 24th.

The aftermath of this unusual Soviet victory in 1941 was documented by the prominent Soviet photographer Alexander Ustinov, who arrived to the battle site on the armoured train. I applied his pictures to the post along with the maps of the area. On Google Maps the actual battle took place here (Google maps). 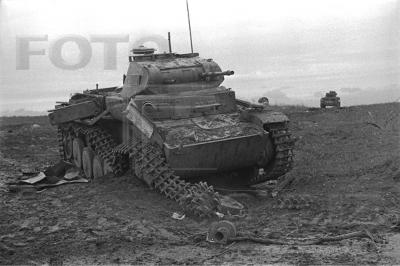